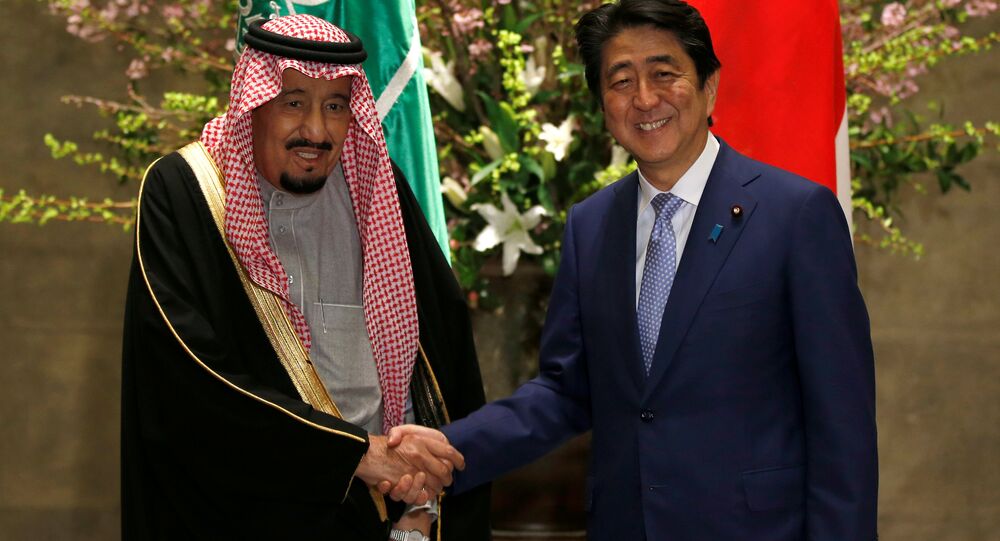 Japan will help Saudi Arabia restructure its economy and give up reliance on crude incomes. At the same time, Japanese companies will be granted preferential condition for doing business in special economic zones planned to be established in the Gulf kingdom.

Under the 2030 vision, the two countries will develop special economic zones to attract more Japanese investments into Saudi Arabia, which is undergoing transformation from an oil-dependent economy amid a major drop in global oil prices, the Japan Times reported.

Head of the economic and energy committee of Saudi Arabia's Consultative Council Abdel Rahman al Rashidi told Sputnik that Riyadh is interested in major participation by Japanese investors in the privatization of Saudi state-owned companies.

Cooperation with Japan is aimed at facilitating the liberalization and diversification of the Saudi economy, a Russian expert in Arab studies told Sputnik Japan, speaking on condition of anonymity.

"It is aimed to enhance Riyadh’s involvement in global economic relations, not as a major oil producing country, but based on a diversified economy and with help from Japanese investors. On the other hand, Tokyo is also interested in this partnership since it will get access to the Saudi market, with its 30 million and a high spending capacity. Moreover, it will also give Japan access to other markets on the Arabian Peninsula, plus another 18 million people," the expert pointed out.

© AFP 2020 / TOSHIFUMI KITAMURA
Japan, Saudi Leaders Agree to Establish Special Economic Zone
Meanwhile, Japan is badly in need of crude and mineral resources produced in Saudi Arabia. According to Andrei Fesyun, an expert in Japanese studies at the Russian Higher School of Economics, Tokyo is ready to invest in the field.

"I think that less expensive hydrocarbon is what Japan is ready to invest in, including new technologies. First of all, it wants to invest in production of liquefied natural gas in Saudi Arabia. This will give an impetus to the Japanese ship-building industry," Fesyun said.

Anna Koroleva, a financial expert and observer for the Russian weekly magazine Expert, King Salman’s visit to Japan has already been described as historic.

"He is accompanied by 500 businessmen and officials. Saudi Arabia is interested in increasing its exports to Japan. It is very important because last year amid the falling oil prices Saudi-Japanese turnover significantly dropped. Companies in joint economic zones would enjoy various benefits and financial support. As a result, this could help promote Saudi goods in the Japanese market," Koroleva told Sputnik Japan.

© AP Photo / Manuel Balce Ceneta
Japan 'Bracing for the Worst' in US Trade Negotiations After TPP Failure
On the other hand, tax incentives and facilitated customs procedures will prompt Japan to develop factories and research and development (R&D) centers in Saudi Arabia, the expert added.

For example, the Saudi sovereign-wealth fund and Japanese telecommunications company Softbank are already working together to create a multibillion-dollar technology-investment fund.

"These plans fully comply with Riyadh’s plans to diversify the economy and fix its budget damaged by low oil prices," Koroleva said.

Meanwhile, the Japanese economy has been in stagnation for a long time and Tokyo seeks to boost export and investments, including into new foreign markets.

© AFP 2020 / Kazuhiro NOGI
Japan Taking Over US Car Market Despite TPP Failure
"It was reported that Japanese car-manufacturer Toyota would launch training of personnel in Saudi Arabia. The company would also consider building a plant there. Altogether, there are nine fields for cooperation, including energy, manufacturing industry, medicine, social infrastructure, investments and finances. Tokyo and Riyadh have a total of 30 joint projects," she said.

Koroleva underscored that cooperation between Saudi Arabia and Japan should be regarded as an important trend in the global economy.

"Now, many countries are turning away from globalization towards regional initiatives. I guess that an alliance between Tokyo and Riyadh will be a successful example of this trend. The global economy needs such examples because global growth is still sloppy. Saudi Arabia could become an important player [in the international economic arena] and even rival the United States and China," she suggested.