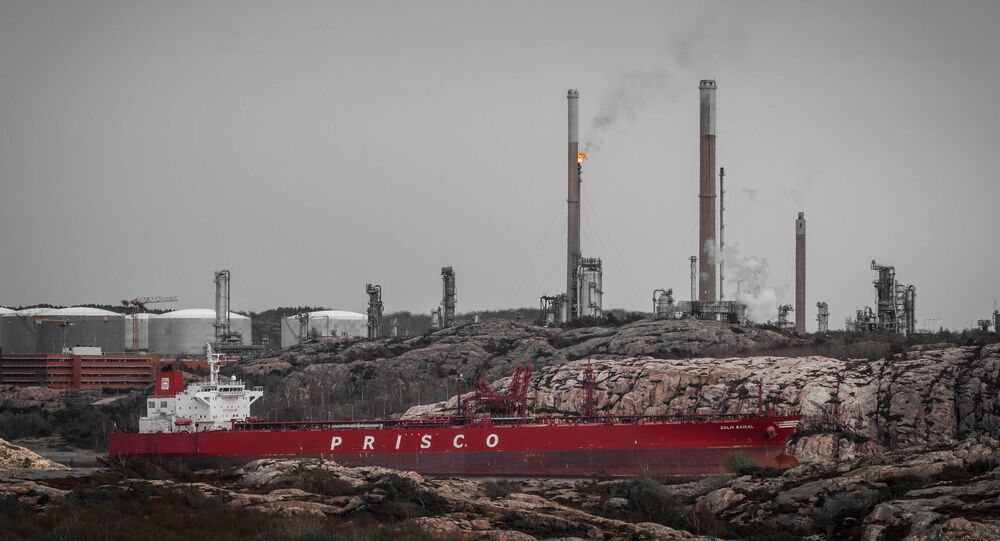 Despite having mapped oil resources of its own, Sweden continues to be reliant on oil imports (mainly from Russia). To the dismay of local drilling companies, the Swedish government is now investigating the possibility of a comprehensive ban on drilling for oil and gas. Needless to say, drilling companies believe this is the wrong approach.

© Sputnik / Alexei Danichev
Sweden Increasingly Reliant on Russian Oil Despite Anti-Moscow Rhetoric
The Geological Survey of Sweden, SGU, was commissioned by the government to investigate whether the exploitation of onshore oil and gas should be banned, the Swedish economic daily Dagens Industri reported. The report will be completed on April 10. Remarkably, the main reason for the proposed ban is not fears of pollution or environmental harm caused by drilling in bedrock. Instead, the idea of the ban is to phase out Sweden's dependency on fossil fuel.

At present there are about 50 deposits with exploration permits for onshore drilling, scattered throughout the Swedish provinces of Dalarna, Gotland, Öland and Östergötland.

Lake Siljan, which is situated in Dalarna and is one of Sweden's largest, is often named in connection with plans of oil extraction. Anders Rydberg, who chairs the company Igrene AB, which analyzes the volumes available and their profitability, is hostile to a comprehensive ban. Instead, he argued, each case should be examined separately.

The ban would also cover shale gas, which contains high amounts of kerogen that may be used for petroleum production. Small-scale extraction of shale has been carried out since the 1630s in the provinces of Västergötland, Östergötland, Närke and Skåne.

© AFP 2020 / OLIVIER MORIN
Swedish Greens Hope to Beat Putin With Renewable Energy
Regardless of the Swedish government's pronounced efforts to reduce the country's dependence on fossil raw materials, Sweden remains heavily-reliant on imports. Sweden is currently the world's 22nd-largest importer of crude oil, despite only ranking as 89th among UN countries in terms of population.

Before the international oil crisis of the 1970s, the majority of oil arrived to Sweden from the Middle East. In the following decades, Sweden's neighbor states Norway and Denmark have played a major role in the supply of oil for Swedish refineries. Over the past decade, however, Russia has taken over as the single largest exporter of crude oil to Sweden. In 2015, over 44 percent of Sweden's total oil imports of 23 million cubic meters came from Russia, number-cruncher Statistics Sweden reported. Incidentally, Sweden itself remains an important producer and exporter of diesel and gasoline.

© Photo : Pixabay
Go Green or Go Home: How Renewable Energy Could Fully Replace Fossil Fuels
In 2005, the Göran Persson government appointed a commission to draw up a comprehensive program called Making Sweden an Oil-Free Society, which aimed to reduce the country's dependence on petroleum materials by 2020. However, following the Social Democrats' subsequent defeat in 2006, the program was not implemented.

Today, with the Social Democrats back in the driver's seat, Sweden is on target to generate all of its electricity from renewables by 2040, and has goals to go entirely carbon-neutral by 2045.