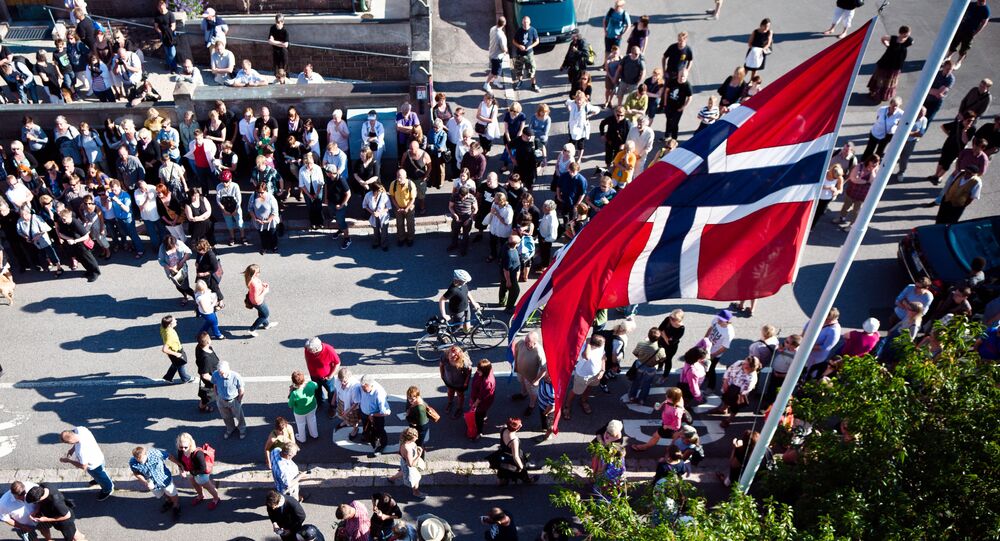 Recently, the Russian embassy to Norway issued a dismal overview of the countries' once-flourishing bilateral relations, calling the poor level of cooperation "unacceptable." Incidentally, this attitude is shared by ordinary Norwegians, particularly in the northern part of the country, which has historically enjoyed close ties with Russia.

© AFP 2020 / Nicholas Kamm
Norway Secretly Wants Trump to Set Example, Rescind Sanctions Against Russia
Recently, the tone in the Norwegian-Russian dialogue has been strained amid sanctions, an ongoing war of words and Norway's military preparations that are justified with allegations of Russian "aggression." However, far from Oslo's defense contracts and deal-making in northern Norway, three out of four inhabitants believe their government ought to do something to improve relations with Russia.

According to a survey the pollster Sentio performed for the Norwegian newspaper Klassekampen, 76 percent of residents in northern Norway would like their government to improve relations with Russia. Remarkably, the percentage grows progressively the closer as we get to Russia, which in the Norwegian media is habitually portrayed as "aggressive," reaching 81 percent in the border county of Finnmark.

This obvious incongruity with Oslo's policy should hardly be surprising, since northern Norway has had close economic ties with Russia ever since the Middle Ages.

The Tromsø Mekaniske shipyard in the city of Tromsø has maintained close relations with Norway's Russian neighbors for years. Today, nearly a third of the shipyard's activity comes via Russian fishing vessels, despite sanctions.

Truly humbling, what Mother Nature wants to serve or show us. Take what she gives and enjoy the ride #tromsø #fjelheisen #cablecar

"For me it is important to maintain the good interpersonal relationship which has existed ever since the Viking days. Let bigwig politicians do their job but ensure that the tone between us ordinary people on either side of the border remains at its best," Roy Olav Andreassen, the shipyard's former union leader, told Klassekampen, venturing that key Russian and Norwegian politicians meet regularly to untangle problematic issues.
© Wikipedia / Marcusroos
Norway's Statoil Cherishes Teamwork With Russia More Than Sanctions Commitment
Greger Mannsverk, CEO of the Kimek shipyard in Kirkenes in Arctic Norway, is among those who believe that sanctions are detrimental to both Russians and Norwegians. Previously, he voiced fears that sanctions would adversely affect northern Norway, which is particularly dependent on economic cooperation with Russia.

Kimek has many Russian employees and maintains close relations with Russia. The town Kirkenes is often nicknamed "Little Murmansk" because of its close ties to Russia, which is only a stone's throw away. Kimek, which has a total of 87 employees, also has an office in Murmansk.

"We are neighbors, and my philosophy is simple: you have to talk to those you share the garden fence with," Greger Mannsverk told the Norwegian daily Dagens Næringsliv.

© AFP 2020 / CORNELIUS POPPE
Angry Norwegians Boil Over 'Anti-Russian' Fence
According to Rune Rafaelsen, the mayor of the border municipality Sør-Varanger, the letter from the Russian embassy described the relationship between Russia and Norway on the government level, while things are much more optimistic locally, with cooperation thriving and the number of border crossings rising.

Rafaelsen believes the good relations in the far north should inspire Norwegian Foreign Minister Børge Brende to work for an end to the reciprocal sanctions.

"There is no doubt that the sanctions have affected our relationship. We need to talk to the Russians and get at least some of the sanctions lifted, in particular those related to fish exports," Rafaelsen told Dagens Næringsliv, citing annual losses of 6 billion NOK ($720mln).

In November 2016, Norwegian ministers took the first steps to unfreeze contacts with Russia, which were put on ice in 2014 to the detriment of Norwegian industries and exports.