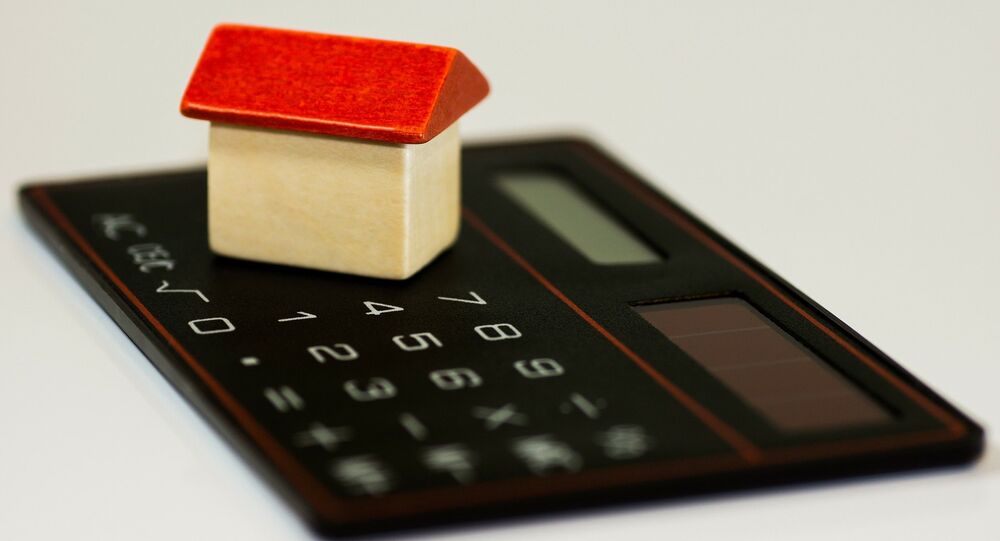 US housing prices are bound to fall from their current near-record highs if the US Federal Reserve goes ahead with another rate hike and halts mortgage-backed security (MBS) reinvestment in order to fend off the heat from the White House and Congress stemming from concern about the bank’s bloated balance sheet.

Kristian Rouz – The US Federal Reserve will stop its mortgage and mortgage-backed security (MBS) reinvestments in April 2018 in order to prevent further expansion of its $4.2-trillion balance sheet, a negative signal to the US real estate market.

© AP Photo / Evan Vucci
US Real Estate Prices May Grow by 15-30% in Long Term Due to Trump’s Election
After the 10-year commercial mortgage-backed securities (CMBS) issued at the height of the mortgage meltdown in 2007 expire this year, real estate prices are likely to tumble due to a projected decline in effective demand. Higher Fed rates will also contribute to a contraction in demand as credit affordability is declining, meaning that already sky-high US property prices might be peaking.

According to Morgan Stanley, the termination of Fed MBS reinvestment will result in higher mortgage costs for consumers, falling in line with the gradual normalisation in the regulator’s interest rate policies.

"Applying this informal guidance to our expectation for the rates path leads us to believe the Fed will halt its MBS reinvestments in April 2018," Morgan Stanley said. "Ending Treasury reinvestments is not necessary for a gradual normalization of the balance sheet; the economy should grow into the Fed's Treasury portfolio within about a decade."

The Fed has been relentlessly criticised by President Donald Trump and Republicans in Congress for having dramatically expanded its balance sheet during the past eight years to no avail as economic growth remains feeble and domestic US investment is low. While the new White House administration is tackling the issue of Fed independence, and the GOP-controlled House is weighing a Fed reform, the regulator might seek to reduce its bloated balance sheet as soon as it can.

Any substantial effort in this regard would likely not be feasible in 2017, as the refinancing of 10-year CMBS issued during the mortgage crisis will need Fed assistance. April 2018 is thus the earliest the regulator will be able to address the issue.

"We believe the FOMC will halt its reinvestments of MBS in April 2018, preceded by a ramp-up in messaging and an announcement at the March 2018 FOMC statement," Morgan Stanley said.

Since the Great Recession, the Fed has increased its base interest costs twice, in December 2015 and December 2016; another two hikes are expected this year. The normalisation of monetary conditions has made mortgages more expensive. For example, after the Fed moved interest rates from 0.25-0.5pc to 0.5-0.75pc last month, the average cost of a 30-year fixed US mortgage increased by roughly 1pc, from about 3.50pc to 4.50pc.

© Flickr / frankieleon
US Housing, Trade Data Might Boost Q3 GDP Amid Manufacturing Drag
The Fed is holding some $1.76 trln in MBS, compared to its Treasury bond portfolio of $2.46 trln, and the Fed’s balance sheet is worth roughly 22pc of the US GDP, which is hazardously high, given the current lack of sustainability in US economic expansion.

The regulator is unlikely to halt its Treasury reinvestments since the US government’s debt is strategically more important than the debts of mortgage borrowers. Subsequently, as the demand for mortgages is poised to decline, the real estate prices, particularly in the residential segment, will drop.

Several banks, including Wells Fargo and Bank of America, have said that they have noticed that demand for mortgages has dipped.

Wells Fargo, the biggest US mortgage dealer, said applications for new mortgage loans crashed 40pc at the end of 4Q16, to $30 bln worth of potential loans. The lender’s mortgage revenue dropped to $6.1 bln in 2016, the lowest since crisis-ravaged 2009.

BofA, for their part, saw a 43pc decline in mortgage applications.

Overall, mortgage loan issuance is projected to drop 17pc in 2017, to $1.5 trln, as estimated by Keefe, Bruyette & Woods. After the Fed halts its MBS reinvestment, the contraction will be even more dramatic, particularly so, given the even higher base interest rates at that point.

As credit affordability suffers, the expected decline in home prices might help stave off some longer-term housing affordability issues, while the Fed’s meddling with this segment of the open market is also deemed a positive development.