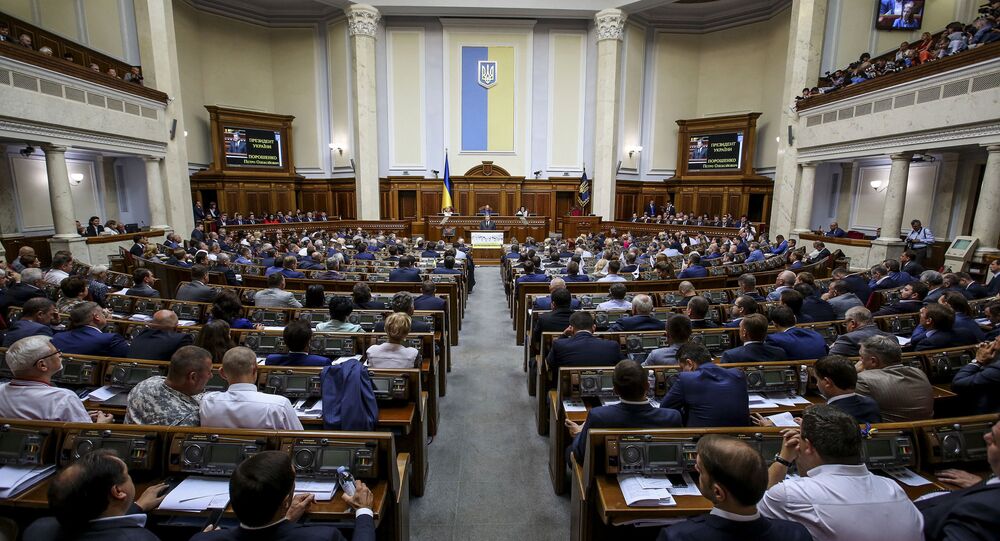 On Wednesday, the Ukrainian parliament approved a draft budget for 2017 with a deficit of three percent of GDP. In the first reading, the bill was passed in October.

The decision was approved by 274 lawmakers, with a required minimum of 226 votes.

In the text of the document, the government expects an inflation rate of 8.1 percent and an exchange rate of 27.2 hryvnyas/$1.

However, the financial document has been lambasted by experts and economists.

In an interview with Radio Sputnik, Ukrainian economist Oleg Sosnin described the budget as "unrealistic."

"In fact, this budget is a worthless piece of paper. The document includes a hryvnya exchange rate which is 12 percent lower than in 2016. This is simply a twisted economic and financial indicator. Lawmakers did not examine the bill in their committees. This budget cannot be implemented. It doesn’t even have a revenue side," Sosnin said.

According to the economist, Ukrainian GDP is not expected to grow while all official stats only simulate growth.

Journalist Oleg Obukhov also noted that the approved budget is a nonsense and lawmakers were not given time to examine it.

"This document doesn’t make sense. They voted for what they were given. They cannot examine it in advance. They spent the whole night discussing it. I guess this was made in a bid to hide all the flaws this document has," Obukhov wrote for RIA Novosti.

Prior to the vote in the parliament, the Ukrainian Financial Ministry even decided to reach out to a superhero. On its Facebook, the ministry proudly presented Budgetman, a fictional character looking like another parody of Superman.

Presumably, Budgetman was expected to help Ukraine in fighting its numerous economic and financial woes.

"Look, all you populists and decision makers. A new superhero, Budgetman, is in the town! He came to end the crisis, pave the way for reforms and draw public attentions to the country’s main financial law," the ministry said in a Facebook post.

According to the ministry, Budgetman has several superhuman abilities, including super equilibrium (the budget is always well-balanced), super speed (it is always submitted to the parliament in time), super strength (the budget can improve the Ukrainian economy) and the ability to adjust reality (the document will help implement economic reforms).