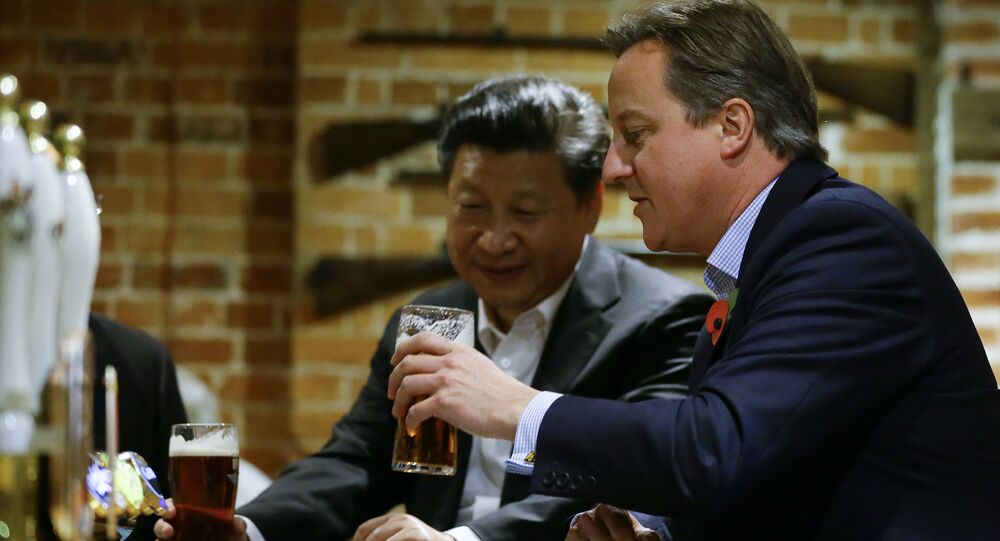 A popular British pub once visited by David Cameron and Xi Jinping was recently purchased by a major Chinese holding for $2.6 million.

© REUTERS / Jason Lee
This is How China Could Respond to a 'Trade War' With US, Japan
The Plough at Cadsden, a traditional 16th century Buckinghamshire pub located 65 kilometers northwest of London and only a few minutes’ walk from the prime ministerial country house retreat of Chequers, has always been a popular establishment.

However, in October 2015 it attracted considerable attention from when China’s President Xi Jinping and then-Prime Minister David Cameron stopped there for a pint of ale during the Chinese leader’s official visit to UK.

It appears that since then a considerable number of Chinese tourists decided to literally follow in the footsteps of their leader and visit the pub to have a taste of traditional British snacks and ale; and it appears that using photos of the two world leaders relaxing in a casual atmosphere for advertising campaign was the right decision, according to Zhang Fei, Deputy Head of Foreign Investments Study Center at China’s Ministry of Commerce.

"The business climate in Great Britain, including Chinese investments, is open and transparent. SinoFortone is a large general holding; for a company like this purchasing a beer restaurant is just another ordinary business transaction. Of course it gained considerable publicity due to media reports about China’s President Xi Jinping and (former) British Prime Minister David Cameron spending some time to relax there; it worked like some good advertising," Zhang Fei told Sputnik.

It should be noted that the Plough at Cadsden is hardly the first British brand to come to the attention of Chinese investors in recent years; their interests range from pork exports and breakfast cereal producers to luxury motor yacht manufacturers and department store groups, not to mention the more ‘traditional’ areas like financial institutions and energy companies.

But Beijing’s largest investment in the British economy, some $8 billion, was made by China General Nuclear Power Group which takes part in the construction of Hinkley Point nuclear power plant – the first nuclear power plant to be built in Europe with the help of Chinese capital.

Elena Ananyeva, head of the British Studies Center at the Institute of Europe, Russian Academy of Sciences, told Sputnik that China’s participation in the Hinkley Point project, which was approved during Xi Jinping’s visit to UK in October 2015, was initially met with considerable resistance from the US.

"When this deal was announced following Xi Jinping’s departure from London, the US told Britain that Washington would’ve never allowed China access to such a sensitive security sphere. The US also attempted to exert pressure on Britain when the Asian Infrastructure Investment Bank was being created. The US adamantly opposed Britain’s attempts to become part of this project; but London did join the bank and the US admitted its mistakes," she said.