The US-EU free trade deal, called TTIP, is wider in scope than the trans-Pacific pact and depends on the new protectionist administration of the United States, the Russian trade representative to the country, Alexander Stadnik, told Sputnik. 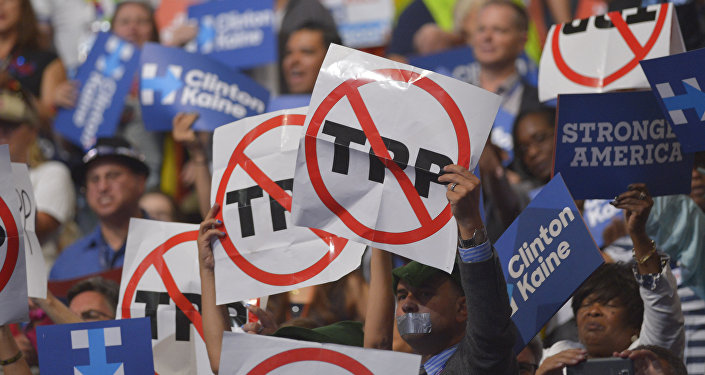 © AFP 2019 / Mandel Ngan
'TPP Loses Its Meaning Without US Participation' – Russian Trade Envoy
WASHINGTON (Sputnik) – The election of free-trade-skeptic Donald Trump as US president last month cast doubt on the future of the nation’s trade arrangements with Europe and Pacific Rim nations, the Transatlantic Trade and Investment Partnership (TTIP) and the Trans-Pacific Partnership (TPP).

"The agreement with Europe … is deeper and more comprehensive and will promote green technology, information cooperation and investment flows. But it has been plagued by divisions since the very beginning, specifically over investor protections, copyright, intellectual property, market access," Stadnik said, adding the TTIP looked like more work than TPP.

"The future of this agreement [TTIP] depends on the US stance. The US will seek to defend its own interests, which according to Trump is protecting its producers, boosting production within the US and bringing back manufacturing jobs," the envoy continued.

Trade protection, which seeks to curb imports or promote exports by imposing barriers to trade, is strongly supported by US President-elect Trump, who pledged to opt out of all free trade agreements under discussion and impose tariffs on imports from China and Mexico.