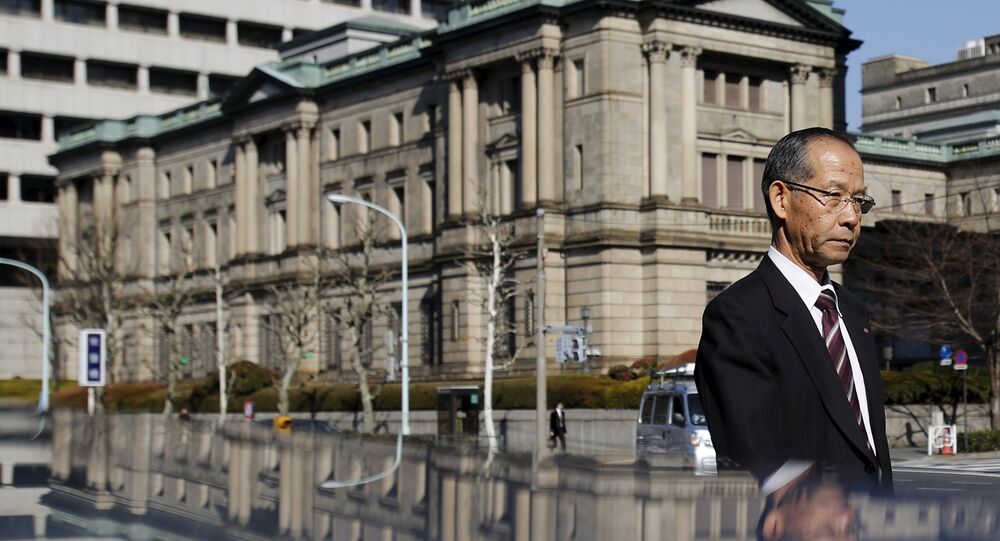 Albeit having suffered losses on its balance sheet first time in four years, the BOJ is poised to keep its current policies in place, whilst the monetary stimulus inefficiency could be addressed by a greater fiscal effort from Japan’s government.

Kristian Rouz – The Bank of Japan (BOJ) reported losses first time in four years as the value of its foreign currency reserves fell due to the yen’s appreciation, resulting in the regulator writing down part of its fixed-income holdings to pare losses.

© REUTERS / Lee Jae-Won
Japanese Gov’t Hints at More Stimulus to Curb Harmful Yen Strength
The BOJ has also reserved more liquidity in order to address future losses as global markets dynamics are pointing at a likely further appreciation of the yen due to its safe haven reserve currency status. Subsequently, the efficiency of the BOJ’s monetary policy response has become increasingly limited, meaning the Japanese government will have to rely on the Finance Ministry’s fiscal stimulus in order to boost economic growth and spur domestic inflation.

The BOJ said on Monday its net losses in six months through September 30 were roughly 200.2 bln yen ($1.8 bln) as a stronger yen had affected the value of the regulator’s foreign reserves. During the same period, the BOJ’s total losses were as high as 699 bln yen resulting from the volatility in FX markets. In the same period of 2015, the BOJ said, its balance sheet was positive at 628.2 bln yen in profits, extracted from the interest paid on debt securities it is holding.

“With the yen weakening recently, the BOJ may return to profit at the end of fiscal year but there will still be concerns about their easing program," Takeshi Minami of Norinchukin Research Institute said. "They are doing this to end deflation but, without producing results, worries will mount."
The yen had appreciated by roughly 11pc in the first fiscal half this year, slashing the value of foreign currency in Japan and affecting all Japanese-based market participants with substantial exposure to foreign assets.

Aside of these monetary losses, the BOJ had to write down some 600 bln yen in its fixed-income holdings due to lower negative profitability or return on this type of assets. Another 242 bln yen off its balance sheet, the BOJ transferred into its reserve fund as the negative dynamics in the bond markets and the yen’s further expected strengthening might entail future losses for the BOJ.

"We have secured enough levels of capital ratio and don't see any problems at the moment," a BOJ representative said.

The BOJ’s capital ratio, however, slid insignificantly, to 8pc, with all the losses and transfers counted in. Part of the reason is that the BOJ has continued lending money to the Japanese government, and the regulator’s holdings of Japanese debt have increased to 397.5 trln yen from 309.5 trln yen in the first half of fiscal 2015.

© Flickr / Japanexperterna.se
Currency Spotlight: Yen’s Rise May Signal Upcoming Trade Disruptions
Four years into its massive monetary stimulus effort, aimed at propelling domestic lending through lowering base borrowing costs, and boosting consumption via injecting money liquidity into the economy, the BOJ is facing market challenges to its policies. Low interest rates (in fact, negative rates) have depressed the profitability of debt holdings, including the yields on Japanese governmental bonds (JGB). Meanwhile, monetary easing policies have failed to contain gains in the yen’s FX rate. A stronger yen has made the situation even harder, exacerbating the losses on the BOJ’s balance sheet.

Last time the BOJ reported losses on its balance sheet was in the first half of fiscal 2012, at roughly the same level (200 bln yen in net losses) as now, four years down the road.

Another mounting concern is that the BOJ is suffering ever-increasing losses of unrealised JGB amortisation, with costs up to almost 10 trln yen per month at this point compared to about 4 trln yen a month in January 2015. However, the BOJ Governor Haruhiko Kuroda said the regulator is enjoying high returns on its debt holdings and has enough on its books to make up for the losses.

The total value of the BOJ’s books is now some 90pc of the size of Japan’s economy.

The broader direction of the BOJ’s policy is unlikely to change, despite the apparent inefficiency of its monetary policy efforts. Inflation in October stood at 0.4pc negative, far below the plus 2pc target, even though the negative interest rates regime (NIRP) has entailed some acceleration in domestic lending. The yen’s strength in the imports-reliant economy of Japan happens to be the most important determinant of the inflation rate.

There is little the BOJ can do about the situation aside of keeping the stimulus in place.

"The Bank of Japan should maintain monetary easing, as intended, until inflation is stable above the 2 percent target, while taking account of costs and risks in terms of possible financial distortions," the Organisation for Economic Cooperation and Development (OECD) said in its recent report.

Bank of Japan Reverses the 'Trump Slump' in Bond Markets