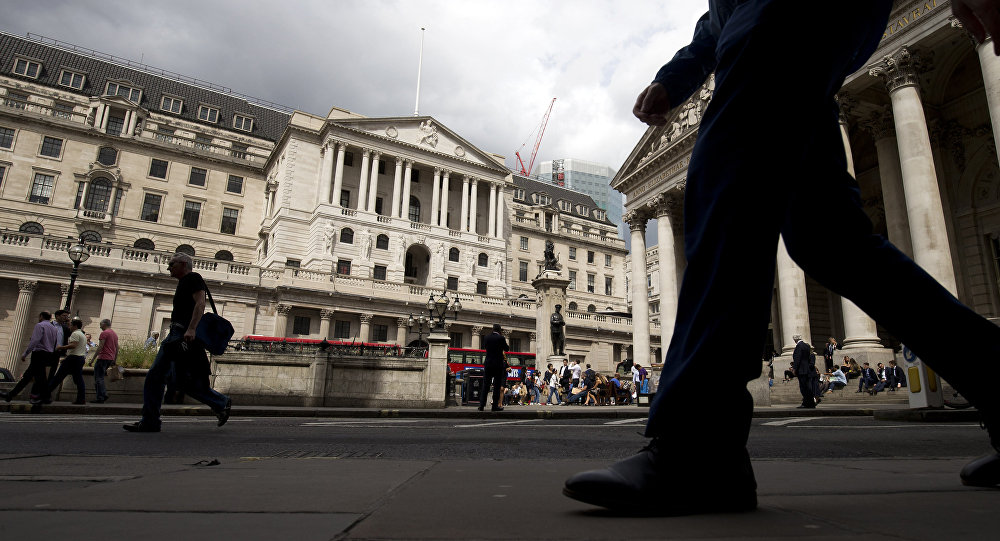 Exchequer’s pledge to increase spending and further cut costs, as well as the strength of the UK’s economy and the anticipation of the Bank of England (BOE) raising base interest rates have all resulted in an increased investment influx into the British assets, pushing the pound’s FX rate higher.

Kristian Rouz – After Chancellor of the Exchequer Philip Hammond unveiled his plan to increase infrastructure spending and cut budget expenditures in his fiscal stimulus effort, investors’ sentiment towards the British economy gained a substantial boost, reflected in the sterling’s FX rate.

© AFP 2019 / BEN STANSALL
UK Pound Spikes as High Court Rules Against Gov't Triggering of Article 50
Having been severely battered by the consequences of the UK’s referendum to separate from the EU on June 23, the pound has surged during the past week, poised to extend its gains to the most in seven years by the end of November as investment capital is pouring back into British assets.

The fiscal stimulus, announced by the UK’s cabinet, coupled with higher inflation expectations and the Bank of England’s (BOE) loose monetary policy, is expected to propel the value of British assets higher. The increased governmental spending will inevitably entail greater borrowing via the issuance of larger volumes of governmental bonds (gilts), depressing their face value and pushing the yields higher, resulting in greater profitability of this type of investment.

Subsequently, investors are rushing to buy into the UK while it is still at its post-Brexit cheapest.

"The UK economy has been resilient so far following the UK’s referendum. We remain positioned for sterling upside over a 6 month horizon via options," analysts of the French multinational bank BNP Paribas wrote in a research note.

© Flickr / Images Money
Pound Tumbles as Bank of England Governor Advocates Keeping Interest Rates Low
During the past 30 days, according to the BOE’s track record, the pound has risen 5pc against its major peers. Another week of gains will result in the sterling posting its best week since January 2009.

Before the Brexit-associated risks had arisen earlier this year, the pound’s normal trading range against the dollar was $1.41-1.60. After the referendum, the pound dropped below $1.20, but a broader investment influx that entailed last week’s Autumn Statement by Chancellor Hammond, resulted in the sterling’s rebound, to $1.25 so far.

“We have priced in a lot of bad news and Brexit fears, and now it’s wait and see,” Sonja Marten of the Frankfurt-based DZ Bank AG said. “The positive view on the economy helps.”

Indeed, the UK’s economy has not slowed down in its first post-Brexit quarter, having expanded by 2.3pc in Q3 year-on-year compared to 2.1pc in Q2. However, quarterly dynamics turned out to be less encouraging, with the economy having gained 0.5pc in Q3 compared to 0.7pc in Q2. Quarterly data, however, is affected by seasonal factors to a greater extent than year-on-year estimates. Yet, growth expectations for 2017 have been lowered after the Autumn Statement as Hammond’s stimulus plan was perceived as too modest.

© Photo : Youtube/ Michael Ridge
New Way to Use Your Crisp Five Pound Note
Consumer spending is still the main driver of the UK’s GDP, and it has recently demonstrated significant growth despite higher inflationary pressures. Household spending rose 0.7pc quarter-on-quarter in Q3 and business investment gained 0.9pc, according to data from the Office for National Statistics (ONS). Meanwhile, retail sales showed the fastest acceleration this year in November, the national retailer’s guild reported.

The pound’s resurgence reflects the broader tendencies in international capital flow. Over the course of this outgoing month, the euro declined by more than 4pc due to weaker Eurozone growth and speculation that the European Central Bank’s monetary stimulus could be extended by six months beyond its expiry in March 2017. The yen has dropped by 7.5pc due to the US President-elect Donald Trump’s pledge to withdraw from the Trans-Pacific Partnership (TPP) trade deal. In emerging markets, currency panic in India and a 10-percent decline in the Mexican peso also reflected the global anxiety over the nascent reshuffle in international trade.

Besides investor encouragement provided by the Exchequer’s stimulus plan, there is another reason behind the sterling’s ascent. The BOE is expected to start raising base interest costs as soon as inflation surpasses the 2-percent threshold, which is almost a reality in the light of the higher prices on imported goods and robust consumer demand. Higher borrowing costs render the national currency more expensive due to the lower volumes of liquidity available in the open market. Also, weaker sterling has resulted in many British industries becoming increasingly competitive in international trade.

“Both developments might persuade the BOE to become less dovish,” analysts of Citigroup said in a white paper.

Meanwhile, implied three-month Cable (dollar-pound) volatility declined to 10.1pc, its lowest since early October, compared to its peak of 21pc on June 24.