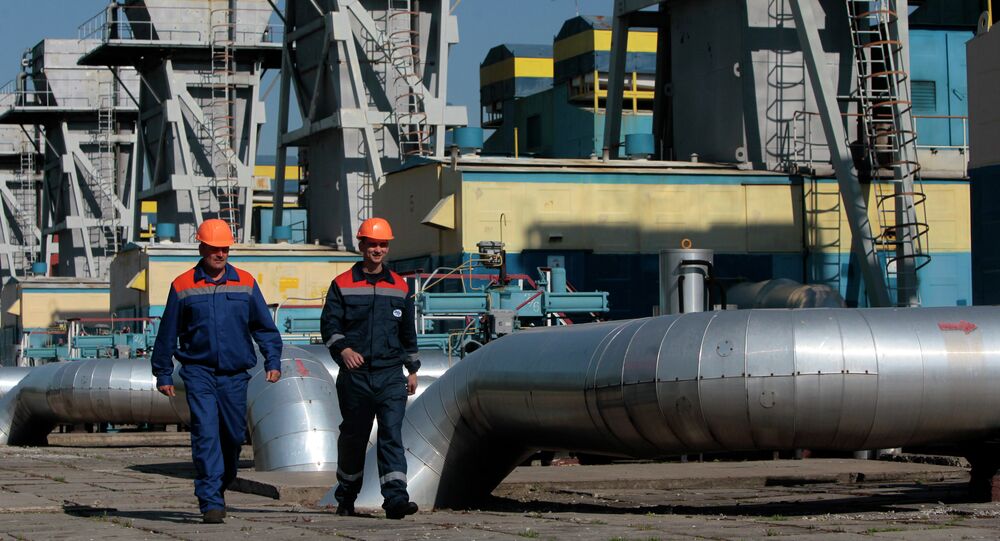 The European Union wants Ukraine to receive more fees from Gazprom for the transit of Russian natural gas because Brussels is not interested in the burden of inefficient economies, economist and political analyst Andrei Suzdaltsev told Radio Sputnik.

© AFP 2021 / SERGEY BOBOK
EU Aims to Maintain Ukraine as Important Gas Transit Country
Russia’s Gazprom would have to would have to pay $4 billion more every year for gas transit and reimburse tens of billions dollars to Ukraine if the Stockholm Arbitration court delivers a ruling in favor of Kiev, Naftogaz Business Development Director Yuriy Vitrenko wrote on Facebook.

The hearings in the Arbitration Institute of the Stockholm Chamber of Commerce kicked off on Monday.

"By the way, the court’s decision on the gas transit contract is expected … by June," Vitrenko added.

According to him, the court’s decision will serve to test Brussels’ commitment to legal norms and European values.

© Sputnik / Ilya Pitalev
Kiev Court Moves Hearings in Russia's Gazprom Anti-Monopoly Case to December 5
Since the beginning of the year, Ukraine unilaterally increased the transit fee for Gazprom, to $4.5 per 1,000 cubic meters of gas at 100 kilometers. In August, Gazprom reported that in the first quarter of 2016 transit costs increased by 33 percent, to 165.9 billion rubles ($2.5 billion).

In the long-run, the European Union is really interested in Ukraine receiving more money from Gazprom for transit, said Andrei Suzdaltsev, the deputy head of the Faculty of World Economy and International Relations at the Moscow-based Higher School of Economics.

"Europe is taking its best efforts to arrange the situation in a way that Russia pays to transit countries. Brussels doesn’t want to bear the burden of inefficient European economies. The situation is that there should be such anti-Russian countries like Ukraine, but at the same time Russia should pay to them," Suzdaltsev told Radio Sputnik.

He underscored that Kiev’s intention to receive more money from Russia for gas transit is not directly related to the dispute over the 2009 transit contract between Gazprom and Naftogaz.

"The current case in the Stockholm Arbitration Court is not directly related to the current transit situation. This is a long story. It began in 2009 with a gas transit contract which was very beneficial for Ukraine. Later, the situation changed rendering that contract unprofitable. The problem emerged back in the time when Viktor Yanukovych was president," the expert recalled.

According to Suzdaltsev, Vitrenko’s attempt to turn a commercial dispute into political one may indicate that Naftogaz understands the flaws of its arguments in the hearings.

"Lithuania also filed a lawsuit against Gazprom in the same court. However, several months ago the court ruled in favor of Gazprom. So, there is hope that this time the decision will also be unbiased," Suzdaltsev concluded.

© Photo : President of the Ukraine Press-Service
Kiev Calls on EU to Prevent Construction of Gas Pipelines Bypassing Ukraine
Furthermore, the economic court of Kiev is due to open hearings on December 5 in the Ukrainian Anti-Monopoly Committee's (AMC) lawsuit to recover $3 billion from Gazprom.

AMC said in August it drafted a lawsuit to recover 85 billion hryvnia ($3 billion) from Gazprom for allegedly abusing its dominance in the Ukrainian gas transit market. Both the Kiev Economic Court and the Supreme Economic Court have dismissed Gazprom's appeals to review lower court rulings.
On October 31, an AMC representative requested the court to seek an additional $3.4 billion from Gazprom as a 140-day late fee.

Lithuania Demands to Reverse Stockholm’s Judgment on Suit Against Gazprom

Ukraine's Naftogaz Promises to Provide Gas to All Consumers