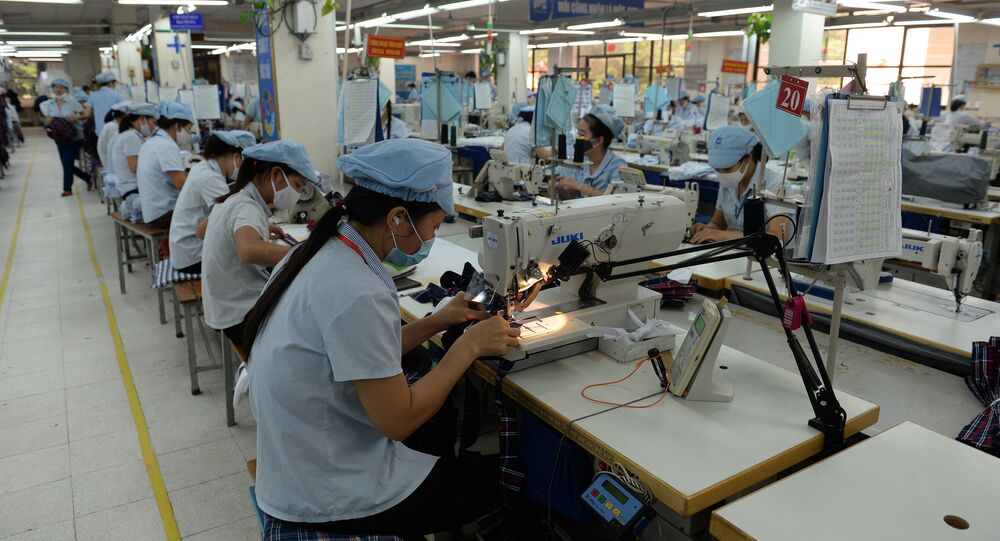 Vietnam "doesn't put all its eggs in one basket," but Hanoi had been counting on the Trans-Pacific Partnership (TPP) deal to create jobs and more wealth, Pham Quang Minh, rector of Hanoi National University's University of Social Sciences and Humanities, told Sputnik Vietnam.

© AFP 2020 / SAM YEH
China Calls on Vietnam to Drop Occupation of Disputed Islands
The election of Donald Trump as US president has effectively ended the Trans-Pacific Partnership (TPP) project, which the Obama administration had placed at the center of its "pivot to Asia."

However, the agreement must be ratified by at least six countries that account for 85 percent of the combined gross domestic production of the 12 TPP nations. Most of the countries have yet to do so, and the Obama administration doesn't have enough support in Congress to ratify the agreement before the end of his presidency.

Given the next president's stated opposition, it appears unlikely that the deal will come to pass in its current form.

Pham Quang Minh, rector of Hanoi National University's University of Social Sciences and Humanities, told Sputnik Vietnam that Vietnam was counting on the economic advantages presented by tariff-free trade with the 11 members of the bloc.

"The TPP was a hope for Vietnam for some time. If it had come to pass, then the Vietnamese economy would have had more opportunities to increase exports, create more jobs and more actively carry out reform. And, as a result of that, Vietnamese politics would have improved. There were hopes and expectations," Pham said.

© AFP 2020 / HOANG DINH NAM
Workers assemble a vehicle at a Toyota motor plant in Vinh Phuc (File)
China was not included in the deal, nor was India. Pham said that the US absence from the TPP deal could leave the way open for regional powers such as China and Japan to take leadership.

"If the US Congress doesn't ratify the TPP agreement, it will create favorable conditions for a series of other countries of the region, especially China. Being the most powerful economy of the region, Beijing has expressed readiness to create a new economic order, a new economic 'market' in which it will play the most important role. Obviously, this (Trump's election and the Congressional delay in ratifying TPP) is very good news for China," Pham said.

"Another interested party in Japan, they were very interested in TTP. The TPP agreement was passed by the Japanese parliament even before the results of the US elections were announced."

© REUTERS / Carlos Barria
Vietnam Backs US ‘Intervention’ in Pacific Amidst Dwindling Asian Pivot
Pham told Sputnik that while Vietnam was hopeful about TPP, it had not placed all its hopes on the agreement. Vietnam's membership of the ten-nation Association of Southeast Asian Nations (ASEAN) is an important driver of economic co-operation, as is the free trade agreement Vietnam signed with the Eurasian Economic Union in 2015.

"Vietnam has always worked from the principle 'don't put all your eggs in one basket,' and wasn't completely relying on TPP. But now it is necessary to activate economic reforms. Vietnam has to wake up and quickly adapt to the new economic situation," Pham said.

Despite the US' likely absence from the deal, other TPP members appear keen to press on with a free trade agreement.

The 21-member Asia-Pacific Economic Cooperation (APEC) began its two-day summit in the Peruvian capital Lima on Thursday, and leaders of the TPP member countries met on the sidelines to discuss a way forward.

On Friday Mexican Finance Minister Idelfonso Fajardo said that he had met with officials from five other TPP signatories: Australia, Malaysia, New Zealand, Japan and Singapore. They agreed to forge ahead with the agreement regardless of what the new US administration decides, the Colombia Basin Herald reported.

© Flickr / Backbone Campaign
Anti-TPP Protests Taking Place in Peru Ahead of APEC Summit
According to New Zealand Prime Minister John Key, there are three options: Firstly, the group of 11 could go ahead without the US, secondly, Trump changes his position, or thirdly, the countries go back to the table and start talks again.

"For the first time ever, really, we've got the United States under president-elect Trump going into a very different space," Key said, who expressed hope that some small changes to the TPP agreement can be made to placate the US President.

"Something significant enough for Donald Trump to be able to say he has got a better deal, but not both so time absorbing or significant that we couldn't get it done quickly," Key said, New Zealand's Stuff news website reported.

Mexico to Persist With TPP Talks Regardless of Washington’s Decision