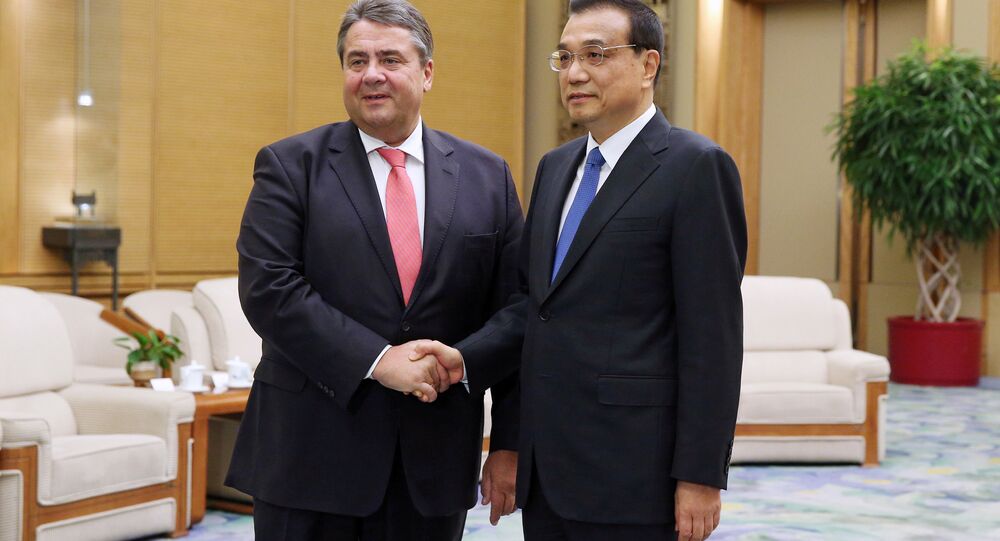 As the world’s second-largest economy, China is an important trade partner for Germany. However, a recent visit to China by German Vice Chancellor Sigmar Gabriel brought to light tensions between Berlin and Beijing.

© Sputnik / Fabrizio Bensch
German Foreign Ministry Won't Say If China Summoned Envoy Before Gabriel's Visit
Sigmar is currently on a five-day visit to China. He is leading a delegation of up to 60 German business executives. The visit will run until November 5.

However, a planned joint appearance by Gabriel and Chinese Commerce Minister Gao Hucheng before the German-Chinese economic commission was cancelled.

In late-October, in an article for Die Wel, Gabriel accused China of limiting European investment and takeovers of Chinese business. He also said that Beijing tries to buy European hi-tech companies working on strategically important technologies.

Despite those facts, there is no crisis between China and Germany. But there is the need for discussions, said Friedolin Strack, a member of the Asia-Pacific Committee of German Business.

"Of course, the atmosphere during the talks was a bit tenser, but this was all about certain interests of both sides. The German government wants to improve conditions for German companies. At the same time China is implementing an ambitious structural reform of its economy, and Beijing doesn’t want this plan to collapse," Strack said in an interview with Sputnik Germany.

The problems over 5,000 German firms face in China are related to limited access to the domestic market.

"German companies perform well but they would do even better if, for example, they could freely invest in the car manufacturing industry. German car makers have to establish joint companies and cannot choose partners. Some sectors of the Chinese economy are totally closed for foreigners," the expert pointed out.

The problem is not new, and has been in discussion for a decade, Strack added. During this period, China has become a major industrial center and an important partner for Germany.

© Flickr / Gabriel Calderón
Soft Power: This is How Chinese Companies Conquer Britain
In the terms of economy, Germany and China are equally important for each other, said Silke Besser, a member of the German-Chinese Economic Association.

"There are thousands of German companies operating in China. For many of them, China is the biggest market in the world. The importance of the Chinese market for German business should not be underestimated. At the same time, Germany is China’s biggest European trade partner and a major destination for Chinese investments," Besser told Sputnik Germany.

The journalist claimed that Gabriel’s "aggressive approach" has damaged German-Chinese partnership because it ignored the actual balance of power.

"This was an attempt to play an equal game against China, an 800-pound gorilla," Sieren noted.

© REUTERS / Wang Zhao/Pool
Germany, China Sign Billions Worth of Cooperation Deals – Gov't Spokesman
Currently, Chinese companies are not happy with the policy of the German Economy Ministry, which prevents them from buying hi-tech German companies. Chinese firms want to buy such German companies as KUKA Roboter, lighting manufacturer Osram and technology manufacturer Aixtron. However, the deals are in question.

Moreover, in the case of Aixtron, the United States opposed the deal, citing security risks because the company is involved in defense technologies.

"I guess this is aimed to deter the rival. The semiconductor industry is in fact dominated by Germany, the US and Japan. If German companies merge with Chinese firms, this will deal a blow to American companies. In this context, Washington’s actions resemble an economic-political intervention," the journalist suggested.

In addition, Beijing has complained that Germany applies especially strict rules while examining Chinese investments to the country. However, Strack said it cannot confirm the allegations. According to him, the German laws on foreign economic activities are applied equally, including to Chinese companies.

© REUTERS / Jason Lee
Drooping Eagle, Soaring Dragon? China Surpasses US in Total Foreign Investment
Prior to Sigmar Gabriel’s visit to China, economic ties between Berlin and Beijing were tested by a remark of European Commissioner for Digital Economy and Society Gunther Oettinger. In a non-public speech, Oettinger made derogatory comments on China, including calling Chinese people "slanty-eyed." Later, the politician apologized for his remarks.

Besser criticized Oettinger for such a "populist statement close to chauvinism." He said that Oettinger also criticized the plan to sell KUKA Roboter to Chinese appliance maker Midea.

"Constructive discussions are needed, but such comments are unacceptable," Besser said.