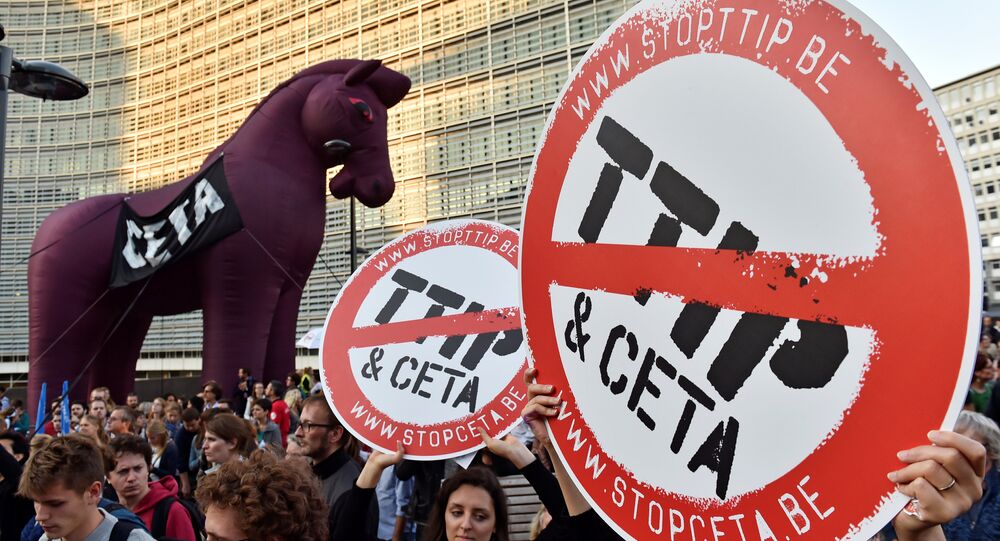 The European Court of Justice (ECJ) decision on free trade deal between the EU and Singapore is due to set a precedent, which could enable proponents of the EU-Canada Comprehensive Economic and Trade Agreement to bypass the legal need to have all EU states' parliamentary approval, a German member of the European Parliament told Sputnik on Tuesday.

MOSCOW (Sputnik) — On October 27, the 28-nation bloc and Ottawa were expected to sign CETA at the joint EU-Canada Summit. However, on Tuesday, European Parliament President Martin Schulz said there was little chance that CETA would be signed as its ratification stumbled in Belgium.

"The [European] Commission and even many members of the European Parliament try to push for exclusive EU competences now. The legal opinion of the European Court of Justice on the Singapore agreement will be decisive on this," Fabio De Masi from the leftist Die Linke party suggested, when asked what Brussels might do to salvage the deal.

© REUTERS / Francois Lenoir
CETA Canada-EU Deal: 'The Credibility of Europe is at Stake' - Ex-Quebec Premier
He added that the possible failure of the free trade agreement with Canada may be regarded as a big victory for Europeans as the protests against the deal voiced by Belgian regions correspond to the interests of millions of people throughout the continent.

The ECJ is still reviewing whether Brussels has exclusive competence to sign and ratify a free trade agreement with Singapore, concluded in October 2014, or whether it should get an approval by all member-states' parliament, as CETA has to. The final ruling on the Singapore case is expected next spring.

Initially, CETA was to be concluded without the involvement of national parliaments, but in early July, following the outrage in some EU countries, the President of the European Commission Jean-Claude Juncker agreed to conclude CETA was a mixed agreement, meaning it needed approval by all of the 38 national and regional parliaments.

© AFP 2021 / NICOLAS MAETERLINCK
CETA: EU-Canada Trade Deal on the Rocks as Belgium PM Michel Confirms Wallonia Veto
On Monday, Belgian Prime Minister Charles Michel said the nation was "not in a position to sign CETA" amid the Walloon government, the Brussels government, the government of Federation Wallonia-Brussels and the French Community Commission concerns about the deal. Under the Belgian federal laws, every region has a right to reject the agreement.