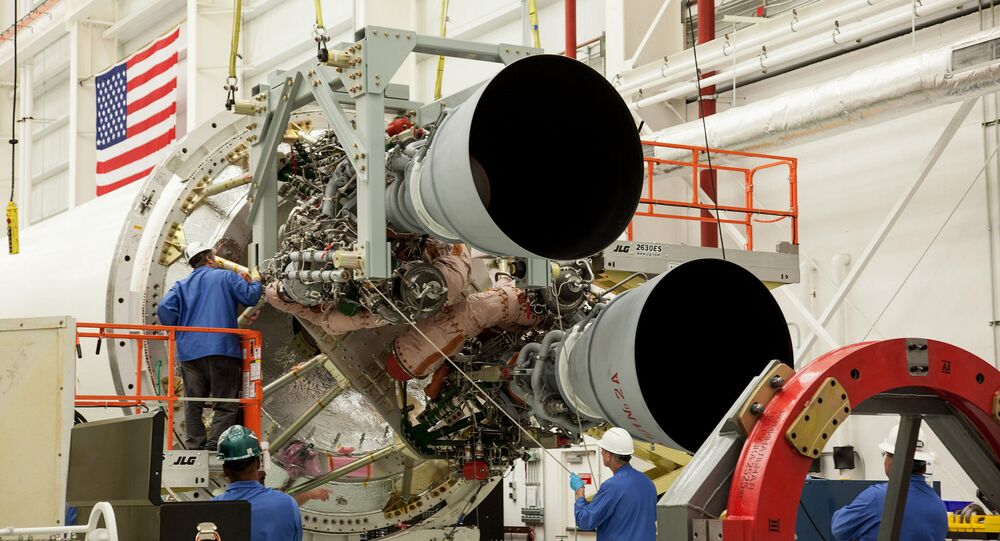 On Friday, Energomash confirmed that US missions to the ISS using the Atlas V launch system would use Russian RD-180 engines. What's more, the company will deliver 14 RD-181s to Orbital ATK between 2017-2018. Industry experts say the contracts are proof that Western countries will buy what they need from Russia, regardless of the political climate.

© REUTERS / Gene Blevins
Manned US Missions to ISS on Atlas V Launcher to Use Russian RD-180 Engines
Speaking to the RIA Novosti news agency on Friday, Energomash General Director Igor Arbuzov explained that Russia would continue to supply the US with RD-180s until at least 2019. Furthermore, the company seems to have found a new loyal customer in Orbital ATK, the US-based aerospace and defense industry company. Energomash will deliver 14 RD-181 over a two year period beginning in 2017 for the company's Antares rocket system.

Yuri Karash, member of the Russian Academy of Cosmonautics, says that the rocket engine contracts mean a lot for both Russian and American companies. Speaking to Russia's Vzglyad newspaper, the space policy expert stressed that "this is a situation where everybody wins."

"For the US, this is important, because the engines installed on the [Orbital ATK] Antares rocket will be used to deliver supplies to the International Space Station (ISS)…This situation shows that when Russia really has something interesting to offer, the US and, in a broader sense, the West, will buy it from us, regardless of any sanctions or political disagreements," he added.

The price tag for the contract with Orbital ATK is unknown, although experts suggest the cost per unit is expected to amount to about $10 million US.

As for the Rd-180s, their use on Atlas rockets are expected to give the US the capability for manned space flights for the first time since the closure of the Space Shuttle Program. At the moment, astronauts fly to the ISS aboard Russian Soyuz rockets. The US plans to create an analogue of Russian engines by 2019. However, Energomash director Arbuzov said that he is confident the US will continue to purchase Russian engines into the early 2020s, particularly taken the time necessary to bring the new US-made systems online.

© Sputnik / Yuri Streletc
STRATCOM Commander Nominee Vows to End US Reliance on Russian RD-180 Rocket Engines
For its part, United Launch Alliance, the company engaged with the launch of Atlas, has announced its intention to purchase another 10-20 RD-180s.

The US's Atlas III and Atlas V rockets have used liquid-fueled RD-180 engines since the early 2000s. Energomash designed the engines especially for the American rockets in the mid-to-late 1990s. Two years ago, US Congress, under pressure from private space company SpaceX, attempted to ban or abandon the use of the Russian engines. But US officials soon calculated that development, testing and certification of the new rockets would require about five years. In June 2016, the Senate caved to pressure from the Pentagon, and agreed to resume the purchase RD-180s.

Antares was developed jointly by Orbital Sciences (merged with Alliant Techsystems in 2015 to create Orbital ATK) and Ukraine's Yuzhnoe Design Bureau, and designed to lift cargoes of up to 5.5 tons into orbit. Factually, the rockets already had Russian engines on board — in the form of updated versions of the NK-33, developed in the late 1960s for the Soviet lunar program. The US company gave the old engines a second life, accommodating them to work with US fuel, electronics and improving their traction. However, following engine failure during the launch of the fifth Antares rocket, the company decided to switch to the use of RD-181 engines. The RD-181s are an export modification of the RD-193, created to lift light rockets into space.