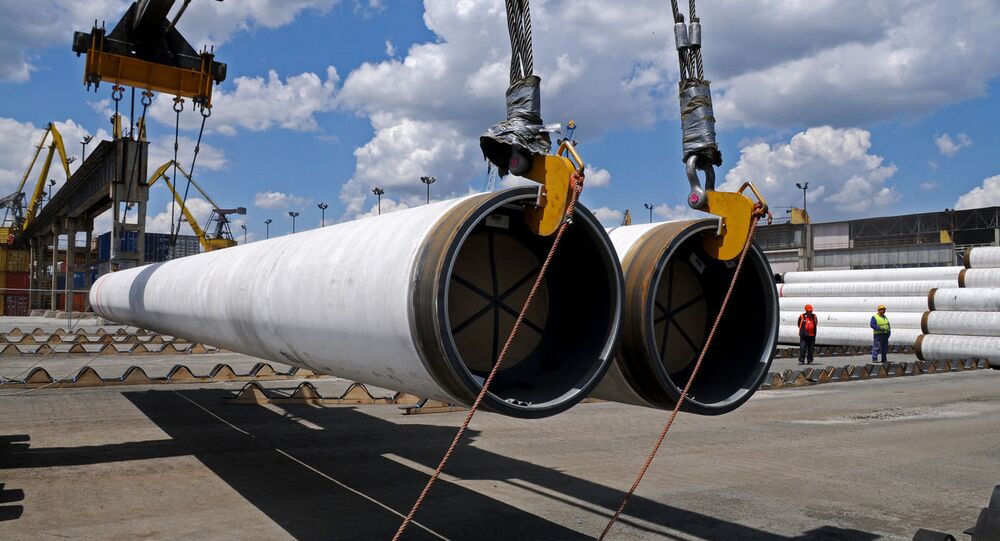 European countries are interested in the Turkish Stream gas pipeline from Russia because of their energy needs and transit fees. In turn, Russia needs an alternative to transporting gas via Ukraine. However, the EU political elite opposes new Russian pipelines in Europe.

© AP Photo / Murad Sezer
Russia Plans to Sign Deal on Turkish Stream Gas Pipeline in October
Russia is waiting for the signing of the final permit documents on the Turkish stream gas pipeline in the coming days, a source in the Energy Ministry recently told RIA Novosti.

At the same time it was also reported that Greece is interested in participating in the project and can provide its territory for the pipeline.
During his visit to Greece, Russia Deputy Prime Minister Arkady Dvorkovich underscored that Moscow is interested in developing economic ties with Athens.

Despite the potential mutual benefits, energy cooperation between Russia and Greece remains only on paper so far. Its future will depend on the decisions by Brussels.

"Greece is interested in building a gas pipeline, we are ready to take part in it, but everything depends on Europe," Greek Energy Minister Panos Skourletis told RIA Novosti.

He added that the pipeline would allow for attracting investments to Greece and create thousands of new jobs.

© Sputnik / Alexey Kudenko
Greece Hopes to Begin EU Talks on South European Pipeline Delivering Russian Gas
What is more, like some other European countries, Greece was interested to be part of the South Stream project. The pipeline is expected to go via the Black Sea and then to Bulgaria, the Balkans, Italy and Austria.

Despite the fact that European companies were interested in the project, in April 2014 the European Parliament adopted a resolution recommending abandoning the initiative. Russia announced the suspension of South Stream and proposed Turkish Stream as an alternative.

It also was suspended after a Russian Su-24 aircraft was downed by a Turkish F-16 fighter in Syria on November 24, 2015. In June, following Turkey's apology to Russia for the November incident, the sides began a reconciliation process.

While construction a pipeline in Turkey is unlikely to meet obstacles, building a pipeline in Europe (for example, via Greece) is likely to face opposition from the European Commission. For example, the Nord Stream-2 was also opposed by Brussels.

"Turkish Stream is expected to have to two strings, one for Turkey and the other for Southern Europe. For the first pipe, Ankara’s permission is enough. However, this is the European Commission that will decide on the second leg running to Greece. Currently, the commission is not very friendly towards Russia so it’s hard to predict whether a pipeline via Greece will work out," Sergei Pravosudov, director of the National Energy Institute, told Svobodnaya Pressa.

© AFP 2021 / ADEM ALTAN
This is Why Europe Cannot Decrease its 'Addiction' to Russian Gas Supplies
According to him, a pipeline could be constructed to the Greek-Turkish border and there will be discussions, talks and bargaining over its future.

He noted that despite the potential difficulties the Turkish Stream pipeline is very important for Moscow due to the problem with transit via Ukraine.

"Russia and Ukraine have a transit agreement which expires in 2019. Then Ukraine could raise the transit fee for Gazprom. So, the Russian company has to look for alternative ways. Moreover, Gazprom has long-term contracts with European countries," the expert said.

What is also important, currently Gazprom holds a 31-percent share in the European gas market. Russian natural gas is cheaper than gas from Norway and Algeria.

"If Europe wants to pay more they can replace Russian gas with LNG deliveries, for example. But European companies want to make money and they are interested in pipelines from Russia. There is the gulf between the interests of the EU bureaucracy and the real situation in the market," Pravosudov pointed out.

Until recently, Moscow said it planned to abandon gas transit via Ukraine. But if Kiev offers adequate terms and prices after 2019 Gazprom is likely to continue to work with Ukraine.

"Transit via Ukraine is good in terms of logistics. But alternative routes are needed. We have Nord Stream, but Nord Sream-2 has faced a number of political obstacles. If the issue is settled Russian could build both Nord Stream-2 and Turkish Stream," Pasechnik said.