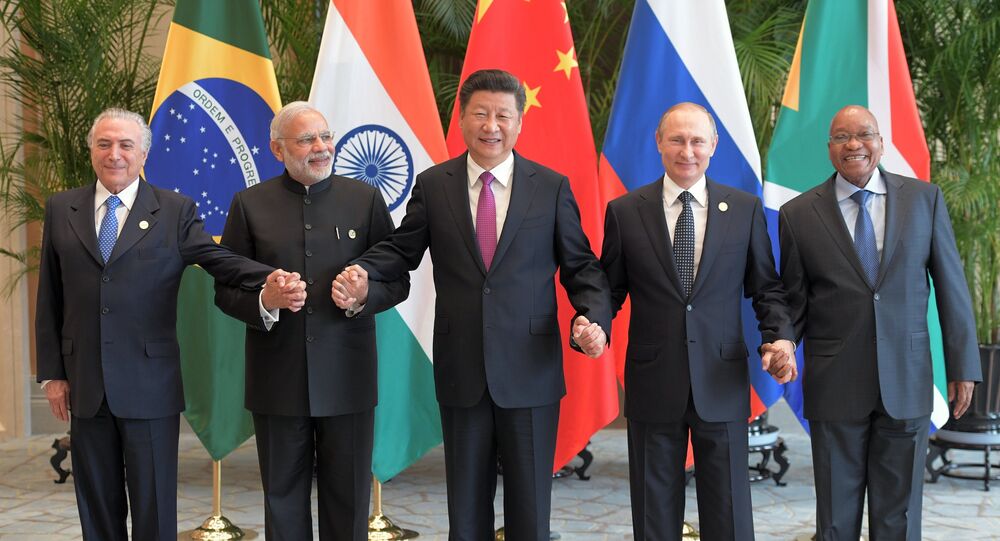 The share of BRICS in the IMF's capital is "a step away" from the 15-percent blocking threshold, the Russian president said.

HANGZHOU (Sputnik) – The joint share of the BRICS emerging economies in the International Monetary Fund's capital has almost reached 15 percent, Russian President Vladimir Putin said Sunday at an informal meeting of BRICS leaders on the sidelines of the G20 summit in Hangzhou, China.

"The BRICS countries saw its joint share in the Fund’s capital to increase to 14.89 percent, a step away from 15-percent blocking threshold. Without a doubt, we have to move forward to carry out an IMF reform," Putin said.

BRICS is an association of five developing economies (Brazil, Russia, India, China, South Africa), which comprises over one third of the world’s population. The five nations have a combined nominal GDP equivalent to approximately 20 percent of gross world product.
BRICS Contingent Reserve Arrangement, New Development Bank Should Work on Full Scale
The work of BRICS Contingent Reserve Arrangement and New Development Bank should be brought to a full-fledged scale, Putin.

"It is necessary to bring to a full-scale work the Contingent Reserve Arrangement and New Development Bank established by BRICS," Putin said at the informal meeting of the leaders of BRICS member states.

The Russian leader pointed out the need to adopt the bank's strategy and " to provide loans in national currencies," as well as to "move on to the financing of specific projects."

The bank will become a major development institution with a statutory capital of $100 billion.

He recalled that the BRICS strategy agreed in the Russian city of Ufa last year provided for major joint projects, primarily in the fields of industry, technical development and energy.

"We are committed to the expansion of contacts in other areas as well — science, education, culture, on the issues of social policy, healthcare and sports," Putin said.

According to Putin, the BRICS leaders also support the idea of cooperation on the level of parliaments, regions, trade unions and civil societies.