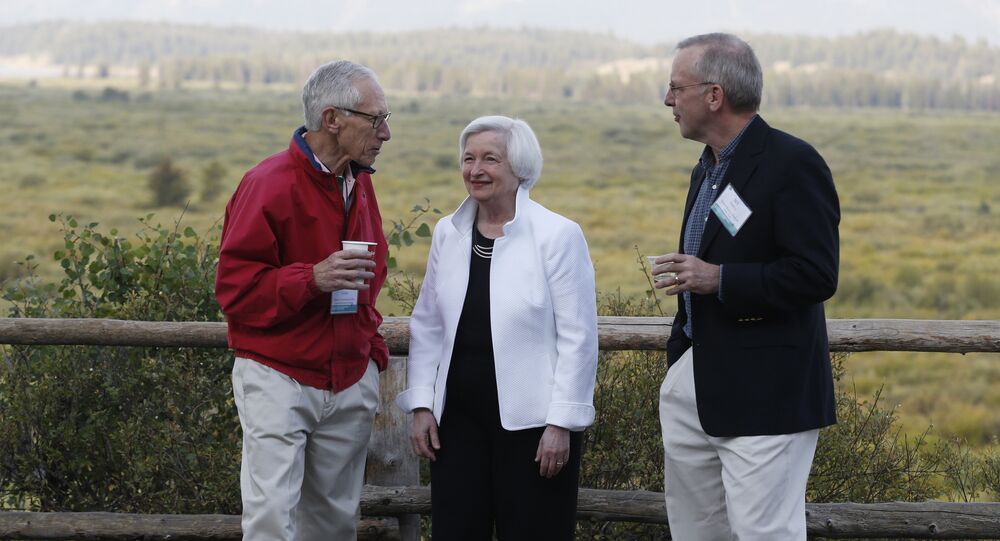 As advanced economies continue their struggle against inefficiency and feeble growth potential, the globe's central bankers have proposed several measures to resolve the dead end situation, including fiscal action, greater asset buyouts, more ambitious targeting and even the introduction of electronic money.

© AP Photo / Lefteris Pitarakis
European Banks Urge Politicians to Save Them From 'Annihilation' by US Rivals
Kristian Rouz — During their recent meeting at the mountain resort Jackson Hole in Wyoming, central bankers from the US Federal Reserve and around the globe signaled that substantial shifts in the monetary policies of the advanced economies will arrive in the nearest future. They claim that current measures have proven insufficient in spurring inflation and growth, noting that low commodity and consumer goods prices have lingered for several years.

While the Eurozone and Japan are leaning towards being more reliant on fiscal stimulus to boost economic expansion, the US, which is hovering over the brink of a full-blown recession, is considering more active monetary policy measures. Among the proposals are a possible abolition of cash in favor of electronic transactions, higher inflation targeting, and setting a nominal GDP target. These all suggest the application of more regulations to the market economy, where incentives for investment have dropped considerably.

The Federal Reserve has signaled that a hike in base borrowing costs could come as soon as September, regardless of the anticipated negative impact on growth, which is likely to lead to an economic contraction. The recent disruptions in policy transmission to the real economy are almost forcing the regulator to act amidst the declining credibility of monetary policies as perceived by the open market. However, in order to overcome an impending recession, US policymakers are considering a set of new unorthodox measures.

The three-day conference in Jackson Hole ended on Saturday, and many academics and central bankers voiced their proposals on future policy action.

"Central banking is in a brave new world," Dennis Lockhart, the President of the Atlanta Federal Reserve Bank said in an interview during the Jackson Hole conference.

© REUTERS / Yves Herman
US Treasury Hits Out at EU Tax Probe Into Apple, Starbucks, Fiat, Amazon
One of the measures proposed is a greater expansion of the Fed's balance sheet, which currently stands at $4.5 bln, compared to only $900 mln prior to the active monetary response entailing the Great Recession around 2009. That means the US government is sliding deeper into debt, but instead of external borrowing, the lion's share of the Treasury notes would be bought by the Fed. The idea makes sense in a way, as the Treasury notes have gained in value over the past year and a half, while their yield is dismally low, rendering domestic and international private investors, as well as international governments less inclined to put their cash into US debt. The Fed could buy these notes indefinitely, however, and such a strategy falls in line with  GOP nominee Donald Trump's vision of a proper growth-boosting strategy —increasing budget expenditures on infrastructure and accruing the national debt.

"I suspect there are colleagues who are contemplating that at least maybe a statically large balance sheet is just going to be a fact of life and be central to the toolkit," Lockhart commented.

The Fed, however, said that their longer-term plan includes reductions of their balance sheet, which would only be possible after a normalization of base borrowing costs (with rates at 3-4.5 percent) and achieving a sustainable growth, which, they admit, is going to take a while.

US central banker (Jeremy Stein), formerly the Fed governor, said, they are "keen to reassure we have got more tools as opposed to saying, ‘Guys, we are kind of running low on ammunition here and the fiscal side needs to step up.' "

That is what policymakers in the UK, the Eurozone, and Japan are doing. With a massive fiscal stimulus announced in the UK, and lower taxes in Japan, their respective authorities are intending to re-ignite growth and investment by cherishing domestic businesses, while weakening currencies are supposed to help their competitiveness. The Eurozone is a more complicated case, as full-scale fiscal stimulus across the 27 semi-sovereign nations is hard to coordinate appropriately.

© Flickr / Antana
Reasons Why Major Global Banks Are Developing Their Own Cryptocurrency
The US central bankers also suggested that a higher inflation target could possibly help, but their counterparts from across the ocean are firmly opposed to the idea. Haruhiko Kuroda, Governor of Bank of Japan (BoJ) said he has "ample space for additional easing", whilst Benoit Coeure of the European Central Bank (ECB) assumed that "we may need to dive deeper into our operational framework."

That means an expansion in the BoJ and EB balance sheets as well, along with the negative interest rate policies (NIRP) to be implemented in order to stave off capital investment from financial market tools and bring the money back to the ground — into construction, manufacturing and agriculture.

Meanwhile, in the US, the NIRP is widely regarded as a positive development, with activists carrying signs reading "higher rates — fewer jobs." A recession could be avoided via NIRP for a short while, but by cutting rates further, central bankers strip themselves from their last remaining tools which allow them to adjust the economy to suit an ever-changing reality.

Monetary regulators "are all close to zero, and they are starting to lose the expectations war," Ethan Harris of Bank of America said. This is particularly alarming as the currently ending business cycle "is particularly dangerous," he noted.

"You are seeing an exploration of how are we going to operate in different world from before the crisis," Lockhart said.

Crude summary: a recession can't be avoided, central banks are entering uncharted waters, money goes the wrong way, while real economy does not generate enough profit. Subsequently, returning the economies back on track — from Japan to Europe to the US — will require active measures, but no one is quite sure which of the proposed steps would help, which would hurt, and which would be a waste of time and of money. The latter is, however, deemed to be inevitable.

US Federal Reserve to Maintain Interest Rates at 0.25-0.5% Range

US Forces World to Embrace the Era of Currency Wars