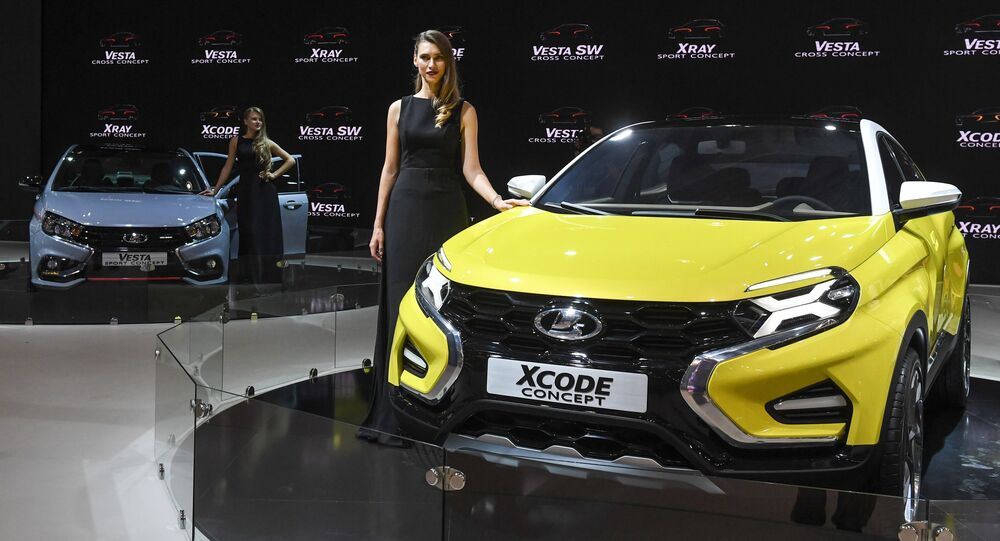 Wednesday marked the kick-off of the Moscow International Automobile Salon (MIAS), a yearly event bringing together carmakers from around the world to show off their latest creations. This year, upsetting conventions, Russia's AvtoVaz rolled out several new concept and production models that ended up becoming the event's showstoppers.

For decades, the biennial show, which began in 1992, has wowed Muscovites and visitors of the Russian capital with the latest automotive designs, most of them by foreign automakers. For just as many years, Russians have appreciated European, American and Japanese cars for their styling, build quality and reliability. But this year, Russian automotive giant AvtoVaz had something of its own to show off.

In fact, according to automotive journalist Artem Krasnov, the Russian company became the showstopper of the event, coming to the show with the largest exposition in the company's history, and leaving visitors impressed with what they saw.

"At the center of everyone's attention was a prototype of the new crossover, the Lada XCODE, where [automotive designer] Steve Mattin's design, with its focus on the letter 'X', saw its evolution through the work of AvtoVaz's Moscow design office," the journalist wrote, in an article for Svobodnaya Pressa.

Details are scarce about the XCODE's platform, and it's anyone's guess as to whether it is based on the Renault B0 platform (used on the popular Duster and Sandero SUV and subcompacts) or on the Lada Kalina, a supermini car of AvtoVaz's own creation. If it's the latter, AvtoVaz may be trying to update a tried and tested platform with something more contemporary: a lightweight urban crossover, Krasnov noted.

In any case, the journalist explained that "we're not going to see a production version of the XCODE earlier than 2018. And will we see it at all? If [former AvtoVaz director] Bo Andersson was fanatical in his prioritization of adhering to deadlines for the release of new models, AvtoVaz's new president, Nicolas Moore is speaking about putting more of an emphasis on exports and reducing costs. As far as the line-up goes, the priority is to revive demand by creating new modifications and restyling."

'A Vesta to Suit Any Taste'

Commenting on the Lada Vesta, the AvtoVaz flagship model released about a year ago, the journalist pointed out that today, the model "continues to look like a real success for the company: it has entrenched itself in the top five [new vehicles] in the Russian market, stepping on the heels of the Lada Granta, and has reached its plan to produce 5,000 units a month," in spite of the decline in demand for new cars after the onset of economic stagnation hitting Russia in the last couple years.

Given the car's popularity, Krasnov noted that "AvtoVaz is not skimping on the modifications of the Vesta, with its latest debut being the Vesta SW Cross, along with its off-road version, the Vesta Cross, featuring 20 cm ground clearance. Both new models are expected to begin production next year: first the conventional 'wagon', and then its 'crossover' variant."

"AvtoVaz has also gone further, offering the Vesta Cross sedan. Today, only Volvo with its S60 Cross Country offers an off road sedan, so the Vesta Cross, in the budget segment of B-Class cars, will really be a unique selling proposition."

Another offering, the Vesta Sport, includes a lowered profile and a more rigid suspension, rear disc brakes and a 1.8 liter engine boosted to 150 hp. According to Krasnov, if the rest of AvtoVaz's pricing is anything to go by, the Sport can be expected to sell for something in the range of 1 million rubles (about $15,500 US). The top of the line version of the base 1.6 liter Vesta now goes for about $11,800 US.

Finally, last but not least, there is the Vesta Signature, a version of the Vesta for junior managers, "featuring a wheelbase extended by 20 cm, separated seats in the back, and ample opportunities for interior customization. It has already entered production, and is meant to appeal to corporate fleets that use a chauffeur. Until recently, the role of an unmarked VIP transporter was played by the Largus VIP, to which Bo Andersson actively transferred the plant's management" when he was company manager. But the Largus, manufactured since 2012, is basically only a rebadged version of the Renault-created Dacia Logan MCV, whereas the Vesta and Vesta Signature are of AvtoVaz's own design.

Alexander Bredikhin facebook
Spark of Genius: Sneak Peak of Russia's Brand New Lada Vesta-Based Electric Car
Another new option is the Vesta CNG, a dual-fuel vehicle able to run on both gasoline and compressed natural gas. Expected to enter production later this year, "that vehicle is marketed toward taxi and corporate parks, offering fuel price savings of up to 300%, according to AvtoVaz's calculations," Krasnov recalled.

The show also featured the Lada XRAY, offered in Cross and Sport editions. That vehicle too is essentially brand new, released for sale in Russia earlier this year.

Ultimately, Krasnov suggested that AvtoVaz has good prospects for the future, so long as it doesn't revert to the stagnant state it faced through the 1990s and much of the 2000s. "It's main concern is not so much the need to increase its market share (which, thanks to the economic downturn, has already reached the planned 20% figure), but on achieving profitability of production."

In any case, the company has already come a long way from the dilapidated state it found itself in decades past.

Students Managed to Assemble and Disassemble UAZ Vehicle in 90 Seconds