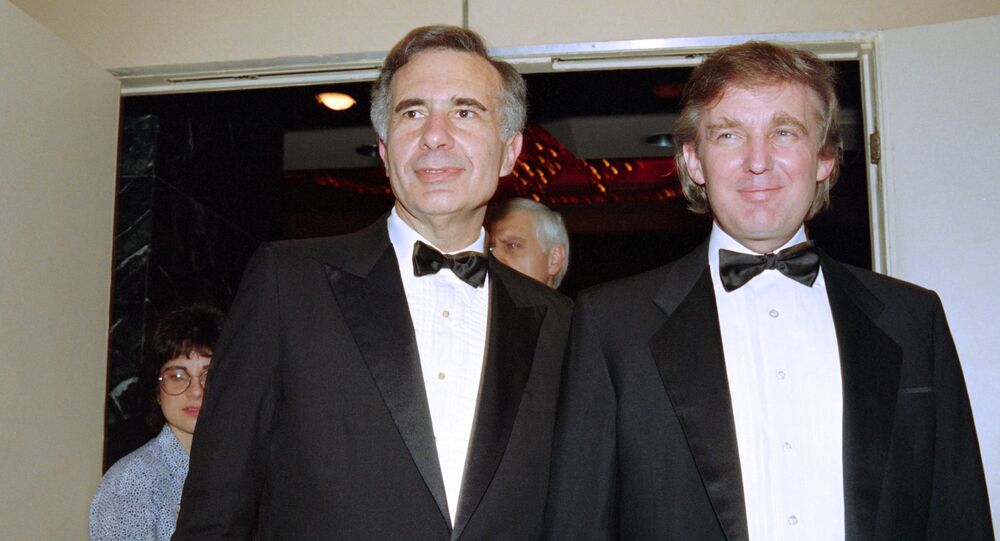 US billionaire investor and prominent Trump supporter Carl Ichan criticized the Federal Reserve's monetary policies, suggesting the current economic slowdown stems from the lack of capital in the non-financial sector being less lucrative than Wall Street.

Kristian Rouz — Carl Icahn, a billionaire business tycoon and investor with broad interests across the tech, real estate, finance, casino, biotech and entertainment industries, said in a recent Bloomberg Markets interview that US stock market is severely overpriced due to the dysfunctional monetary policies practiced by the Federal Reserve. Subsequently, his best suggested investment strategy is minimizing market exposure ahead of the looming shifts in policy and economic structure, or a massive financial meltdown.

© REUTERS / Joe White
Weaker US Retail Sales, Price Index Indicate Slower 3Q Growth
Carl Icahn, whose net worth is estimated at $17 bln, is primarily active in diversified investment across multiple sectors of the economy through his company, Icahn Enterprises. He also serves as Chairman for Federal-Mogul, a development and manufacturing company operating nationwide. An avid supporter of Donald Trump's bid for presidency this year, Icahn was previously cited as expressing grave concerns over the state of the US economy. On Wednesday, he gave an increasingly pessimistic view on the matter, saying that the US either stands on the edge of painful reform or a full-scale economic crisis.

"There's certainly good companies. (The market) is way overvalued at 20 times the S&P and I'll tell you why: a lot of it is a result of zero interest rates.  It's just what I said. You have zero interest and a lot of buybacks. Money is not going into capital," Icahn told Bloomberg Markets.

The Federal Reserve's ultra-loose monetary policies, initially introduced in 2009 in order to boost lending and real economy investment, have produced significant risks stemming from the side effects of near-zero interest rates. The zero interest rates regime (ZIRP) was intact in the US in 2009-2015 for the Fed fund rates, determining base borrowing costs for the economy. The base rates were lifted off zero in December 2015, resulting in a visible blow to fixed-income and stock markets, with the broader economy slowing to near-1 percent growth in the three consecutive quarters between October 2015 and June 2016.

Corporate earnings in the US have been demonstrating negative dynamics since mid-2015, affecting broader growth and triggering cuts in domestic investment. Besides, low interest rates have all but exhausted their positive effects to domestic investment as well, with the credit money flowing into the higher profitable financial assets rather than the struggling amidst the expansion slowdown real economy.

"We have no capital spending," Icahn explained the negative policy consequences to investment. "Capital spending is going way down.  In a society like us, manufacturing is important <…> The last two years, I mean, it's just down four percent in the last quarter which is unheard of when you don't have a recession.  OK.  Productivity has not grown <…> These are very important things in a capitalistic system."

Alessio Trerotoli
US Job Openings Advance in June as Labor Efficacy Concerns Brewing
Indeed, US labor productivity has been nearly stagnant for three past quarters amidst the gains in the job market, suggesting a dramatic slump in the competitiveness of jobs, passing on to the entire economy. Amidst the lack of market-sustainable jobs coupled with a substantial presence of qualified workforce, the prospects for an accelerated expansion in the economy are largely toned down.

"I am saying that the middle class — that is why you saw this uprising for Bernie Sanders and you see it for Trump and you see Brexit and you see what's going on in Italy," Icahn said.

In such circumstances, Icahn Enterprises have cut their market exposure by 149 percent during the past 12 months by hedging against the capital losses in stocks and real economy. Putting his biggest bet on Trump's candidacy for President, Icahn suggested the nominee should focus on his proposed economic reform. The GOP candidate explained his economic plan, "Trumponomics," in late July, resulting in a surge of his nationwide popularity.

"I do believe that Donald has a great shot if he sticks to the positives, not so much to the negatives… about the economy," Icahn said.

Stagnation? US GDP to Remain Flat at 1 Percent in Q3, Q4