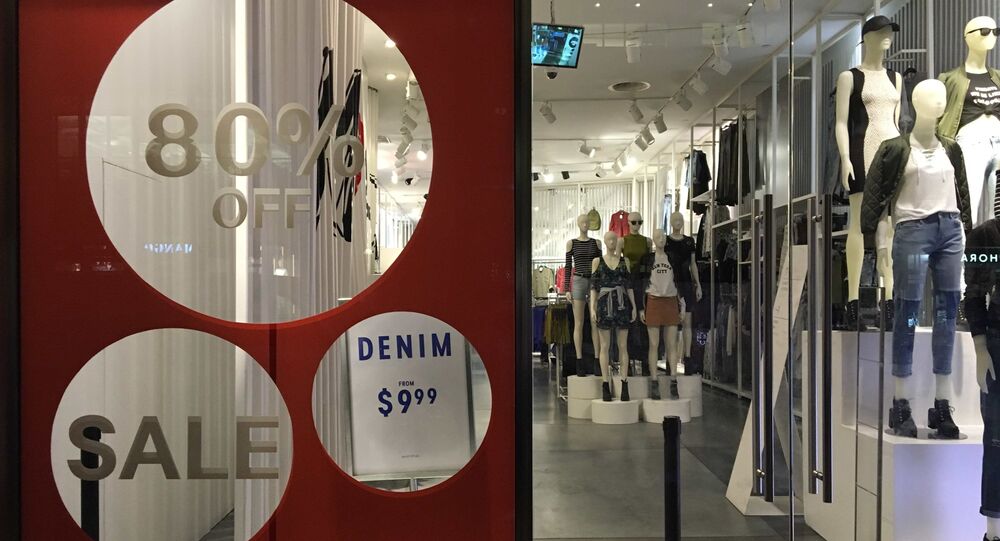 US retail decelerated abruptly in July despite supposed job market strength, suggesting lower inflation, growth and business activity in the short-term, and signaling that the Fed is likely to abstain from making any decisive policy moves in the foreseeable future.

© Flickr / Tyler Merbler
US Retail Sales, Inflation Gain Momentum, Yet Broader Growth Subdued
Kristian Rouz – The US Federal Reserve is likely to hold off on raising interest rates as the previous month’s optimism regarding the pace of economic expansion anticipated in 3Q waned amid discouraging retail sales and inflation reports. While the Atlanta Fed had a week ago expected the US economy to grow to 3.8 percent (annualized) in 3Q after lackluster performance of 1.2 percent in 2Q16, in the light of the most recent data, expectations are becoming increasingly modest.

Moreover, as it is still the middle of 3Q16, further developments in the real economy, employment, domestic consumption and the financial markets, as well as lending, might significantly affect the pace of growth, with downward pressures seen as a major concern, and economic expansion remaining subdued.

US consumer spending, which drives roughly 72 percent of the GDP, has been weakening throughout the current quarter, with retail sales, a key measure for domestic consumption, posting zero gain in the month of July, below previous expectations of 0.4 percent advance. The halt in retail followed a 0.8 percent expansion in June, as the Commerce Department reported on Friday. Moreover, excluding the automobile segment of the consumer market, sales plunged 0.3 percent in July.

"You have had two months of very strong job growth. It just seems very odd that spending would be weak,” Steve Blitz of New York-based M Science said.

Subsequently, weaker sales and low inflation suggest the economy has not yet achieved enough sustainability for the Fed to take decisive action on policy.

"Fed members are afraid to come out from under their rocks until growth is sustainably solid and inflation in, near or at their target, and today's reports don't provide them with any comfort that will happen soon," Joel Naroff of Holland, PA-based Naroff Economic Advisors said.

Reflecting the less optimistic view on the broader economy, the New York Fed downgraded its 3Q GDP growth forecast to 2.43 percent from the previously expected 2.63 percent. The data suggest more sluggishness in the economy, the regulator said.

The Atlanta Fed also revised its 3Q16 growth forecast downward, from the previously expected 3.7/3.8 percent to 3.5 percent, referring to the retail data and the marred outlook on inflation.

© Flickr / Chris Goldberg
Stagnation? US GDP to Remain Flat at 1 Percent in Q3, Q4
Therefore, the Federal Open Market Committee (FOMC) is more likely to leave short-term benchmark interest rates unchanged at 0.25-0.5 percent during its next meeting scheduled for September 21. The odds the base borrowing costs will remain unchanged after the FOMC meeting are at 90 percent, according to the market consensus expectations.

Despite the recent gains in US payrolls and hiring, the stickiness in wages might be the main factor preventing domestic consumption from more solid gains. The reasonably high level of household indebtedness might be another factor.

“It is a bit disappointing,” Kevin Cummins of Stamford, CT-based RBS Securities Inc. said. “Labor income is the key. Confidence seems to be moving sideways.”

To make the situation even more hopeless for those expecting a Fed hike, a separate report by the Labor Department showed that wholesale prices slumped in July – apparently, amid the lack of efficient consumer demand –  their greatest slide in 12 months. Factory-gate prices dropped 0.4 percent in July compared to a 0.5 percent gain the previous month, with cheaper imports to blame.

With observers now expecting a hike in Fed fund rates in December, the widespread sentiment in the financial markets is that no hikes will happen well into next year.

IMF: US Dollar Overvalued Due to Its Safe Haven Status, Oil Prices Decline