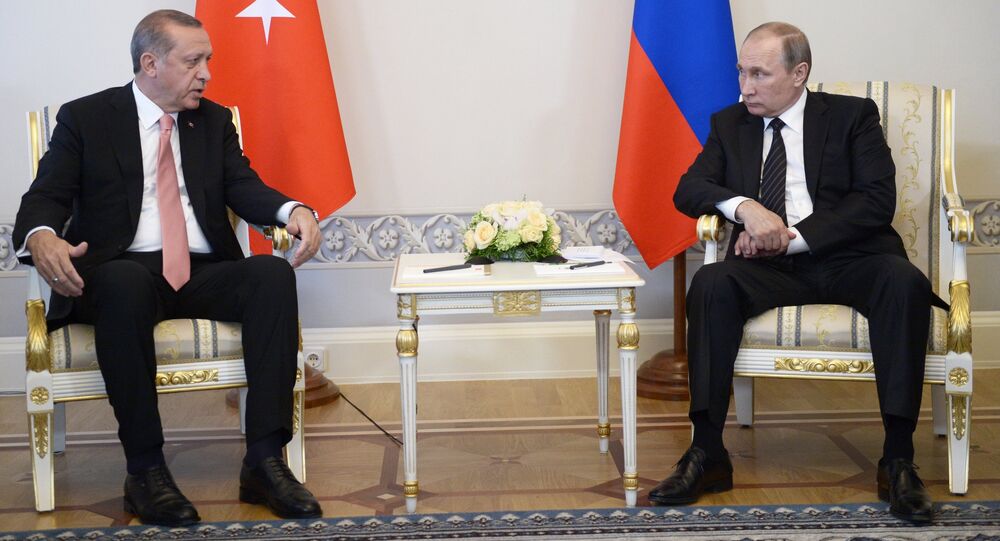 Restoration of economic ties between Russia and Turkey will benefit the countries' prosperity greatly, as both economies have been hit hard by the crisis in relations since last year, Zeynap Jane Kandur, Member of the Justice and Development Party’s (AKP) Istanbul Administration, told Sputnik on Tuesday.

MOSCOW (Sputnik) — Earlier in the day, Russian President Vladimir Putin met with his Turkish counterpart Recep Tayyip Erdogan, who arrived in St. Petersburg for first talks to reset bilateral relations after the November 2015 downing of a Russian aircraft by Turkey. The talks mainly focused on economic aspects. Both leaders said they are determined to restore ties to the pre-crisis level or reach an even closer cooperation.

"The crisis that occurred last year has hit the economy of both countries. This aspect is something that directly affects the people. Trade will benefit the people of both countries. Other issues are more complicated and further talks will be needed to sort out details," Kandur said.

Putin in turn said Russia wanted to fully restore ties with Turkey and therefore is drafting a 2016-19 mid-term program of cooperation in economic, technical and scientific areas. He also added Russia will gradually lift the restrictions it had imposed against Turkish companies, and restoring charter flights between Russia and Turkey "is a matter of time."

According to Kandur, the immediate phone call that Putin made to support his Turkish counterpart Recep Tayyip Erdogan just after a coup attempt on July 15 in the country was an important step in the restoration of bilateral relations and cemented the rapprochement that had already started by that time.

"Most importantly the rapprochement began in June with the letter that Erdogan wrote. But the thwarted coup happened in the meantime. Vladimir Putin’s immediate telephone to Erdogan cemented a process that had already begun," Kandur said.

Relations between Moscow and Ankara hit rock bottom last November after a Turkish jet shot down a Russian plane on the Syrian border. Their ties started warming up again after the Turkish president offered his condolences to the family of the slain Russian pilot in June.

Gas Discounts for Turkey Not on Agenda - Russian Energy Minister