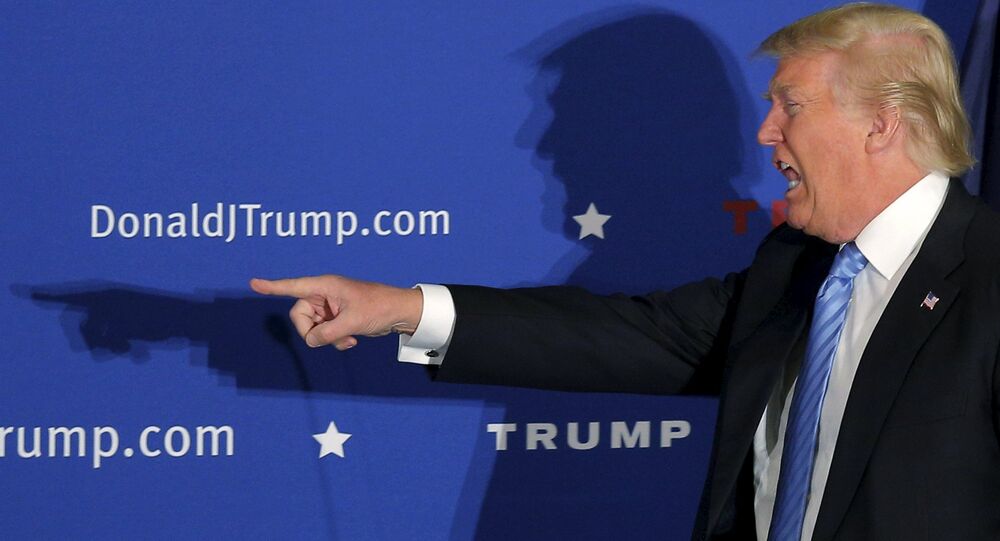 Albeit stirring a fair amount of controversy, Donald Trump's macroeconomic and fiscal agenda follows the blueprints of tested models, harkening to the glory days of the Eisenhower-style emphasis on infrastructure development, and Reaganomics, with a hip flavor of "fairness" discourse.

© Flickr / Chris Goldberg
Stagnation? US GDP to Remain Flat at 1 Percent in Q3, Q4
Essentially a supply-side model of economy, the proposed plan suggests cuts in taxes, expansion in taxable base, improved competitiveness in international trade in goods and services, and hints at potentially quicker normalization in monetary policies, as well as better fiscal performance. Albeit likely facing harsh criticism from its opponents, Trump's reform, backed by his recently-unveiled team of advisers on economy and finance, implies significant shifts in the government's approach to the economy, possibly allowing to avoid the mire of sticky salaries and wages, near-stagnant GDP growth and a looming recession at a price of a diminished US involvement in international economic affairs and multi-national corporate business structure.

"We now begin a great national conversation about economic renewal for America," Trump said delivering a speech at the Detroit Economic Club on Monday. "The city of Detroit is the living, breathing example of my opponent's failed economic agenda," Trump added, referring to the several decades of an uninterrupted Democrat rule in the city, resulting in its currently dire financial circumstances stemming from the redistributive demand-side agenda dominating the minds of the local economy planners.

The Trump-proposed plan addresses several key economic issues, currently preventing, in his vision, the US economy from performing better domestically and internationally.

First of all, the GOP candidate addressed the excessive and inadequate economic regulation, effectively staving off smaller businesses from more profitable operations, yet hardly preventing "too-big-to-fail" enterprises from their contributions to systemic risks in the broader economy.

Second, Trump's tax plan implies a major reduction in tax rates, with fiscal revenues expected to retreat slightly or remain at their current level in accordance with the Laffer curve concept.

"For many American workers, their tax rate will be zero," Trump said.

His tax proposals suggest simplified and unified approach to taxation, introducing three tax rates instead of the current seven — at 12 percent, 25 percent, and 33 percent. Minimum taxable income would be raised, allowing many working Americans to not pay taxes at all, resulting in a boost in consumption and inflation, spurring overall economic growth.

The "Trump fiscal stimulus" suggests lower corporate taxes, at 15 percent instead of the current 35 percent, aimed at helping corporate America cope with the plunge in revenues and positively affecting jobs creation.

© AFP 2021 / PAUL J. RICHARDS
US Consumer Spending Beats Estimates, Unsupportive to GDP and Inflation
Trump, however, warned, that the rich will pay their "fair share" of taxes — mirroring the dropout revolutionary candidate Bernie Sanders' rhetoric of "fairness." Yet, Trump noted, entrepreneurs will not be forced to "pay so much that it destroys jobs." "No one will gain more from these proposals than low-and-middle income Americans," Trump reiterated.

Expected short-term declines in tax revenues, Trump noted, would be addressed by a revision of the extensive social benefit giveaways, and an expansion in tax base resulting from an accelerated job creation and business activity.

Third, Trump addressed the discrepancies in international trade that have decimated US jobs and manufacturing over the past two decades.

"We will put American steel into the spine of this nation," Trump said. "Americanism, not globalism, will be our new credo."

The GOP candidate reconfirmed his commitment to revise, amend or repeal multiple trade agreements the US is currently a part of, should there be discovered any negative effect to US jobs or industrial output in them. Trumps' disapproval of the Trans-Pacific Partnership, likely affecting US manufacturing jobs, and his itch to renegotiate the NAFTA treaty with Mexico and Canada, which he sees as hampering US wages and salaries, were the highlights of this part of his Detroit speech.

Trump also attacked his Democrat rival, saying that recently "she accidentally told the truth and said she wanted to raise taxes on the middle class." Trump voiced his dissatisfaction with the Democratic Party-backed New-Keynesian and internationalist economic policies, saying that "the city of Detroit is the living, breathing example of my opponent's failed economic agenda" — apparently a reference to the economic despair that rules supreme in the once-powerhouse city economy.

"We need to stop believing in politicians, and start believing in America… We are ready to dream great things for our country once again," Trump said, once again echoing Bernie Sanders' "A Future To Believe In" campaign slogan and emphasizing his non-allegiance with the system of bureaucratic governance, widely mistrusted among voters both on the right and on the left.