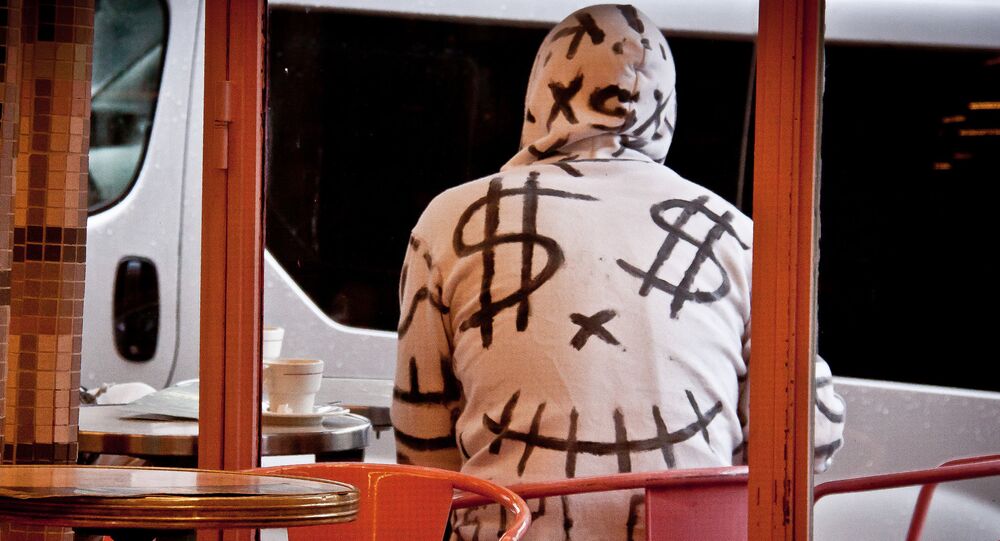 Stagnation? US GDP to Remain Flat at 1 Percent in Q3, Q4

Sluggishness in the US economy is poised to linger due to weak manufacturing and shrinking domestic investment, with fears of a potential recession and concern over possible negative interest rates becoming more prominent.

Kristian Rouz – After a frustratingly low 1.2 percent annualized pace of expansion in 2Q16, the US economy is poised to maintain its current rate of growth in the second half of the year, despite the more optimistic projections of monetary authorities.

© Sputnik / Alexei Filippov
Q2 US GDP Grows Only 1.2% Amid Corporate Gloom, Falling Inventories
The main reasons behind the slowdown are the declines in domestic investment and the ongoing inventory glut, accompanied by sluggish sales in material goods. Despite rosy 3.7pc growth projections for Q3 from the Federal Reserve Bank of Atlanta, the actual pace of growth is likely to remain subdued at a 1pc level, as declines in corporate profits and manufacturing would effectively slash percentage points off the final figure.

On Thursday, the Atlanta Fed released its preliminary estimate of US GDP expansion in 3Q16: an optimistic 3.7pc year-on-year. However, their preliminary expectation of 2.4pc growth in 2Q was double the actual growth of 1.2pc, with a build-up of inventories and a lack of effective sales having tamed the expansion. The US economy is experiencing its flattest GDP growth dynamics since the late 1940s, pointing to a current stagnation, underscored by the stickiness in wages, with a recession on the horizon.

© AFP 2020 / PAUL J. RICHARDS
US Consumer Spending Beats Estimates, Unsupportive to GDP and Inflation
From the start of the year, gross private domestic investment (GPDI) dropped 9.7pc, while the annualized drop in GDPI totaled 2.5pc, according to the data published by the St. Louis Fed and Bureau of Economic Analysis (BEA). Despite not being in recession, the economy hasn’t seen GDPI fall this dramatically since 1967, amid the US Vietnam War and a 'long hot summer' which saw 159 race riots throughout the country. Residential investment also declined by roughly 6pc amid the excessive regulations hampering domestic lending and construction.

The non-residential fixed investment drop was 2.2pc in Q2 from the previous quarter (-1.3pc year-on-year, a wider gap compared to —0.4pc in 1Q16). Meanwhile, low Treasury yields are providing a sense of relative stability in the financial markets, have contributed to a re-gearing of the corporate sector at best, instead of spurring capital spending.

"Our infrastructure is crumbling. Interest rates are historically low but set to rise, so it's a good time to do it," Robert Denk of the National Association of Home Builders said.

Subsequently, compared to its historic average growth of 3.3pc per year, the US economy had expanded by a modest2.2pc a year in 2012-2015, with the growth slowing to an annualized 1pc in the three quarters starting in 4Q15. Given that corporate earnings were battered severely starting in mid-2015, any increase in corporate spending, which would drive a broader economic expansion, is unlikely, resulting in 1-percent growth in Q3 and Q4 at best. When one factors in pre-election political uncertainty, the pace of expansion might slow further.

"Uncertainty is one of the reasons that businesses aren't investing," Bill Watkins of the Center for Economic Research and Forecasting at California Lutheran University said.

Meanwhile, the number of initial unemployment claims rose in the last week of July by 3,000 to 269,000, which is still below the acceptability threshold of 300,000. Personnel layoffs in the energy sector contributed to this slight increase. Manufacturing is also struggling, with orders for factory goods having dropped a second consecutive month in June, with the demand for transportation gear contributing the greatest.

US Q3 GDP Expansion Revised Up to 2.1% on Abundant Inventories