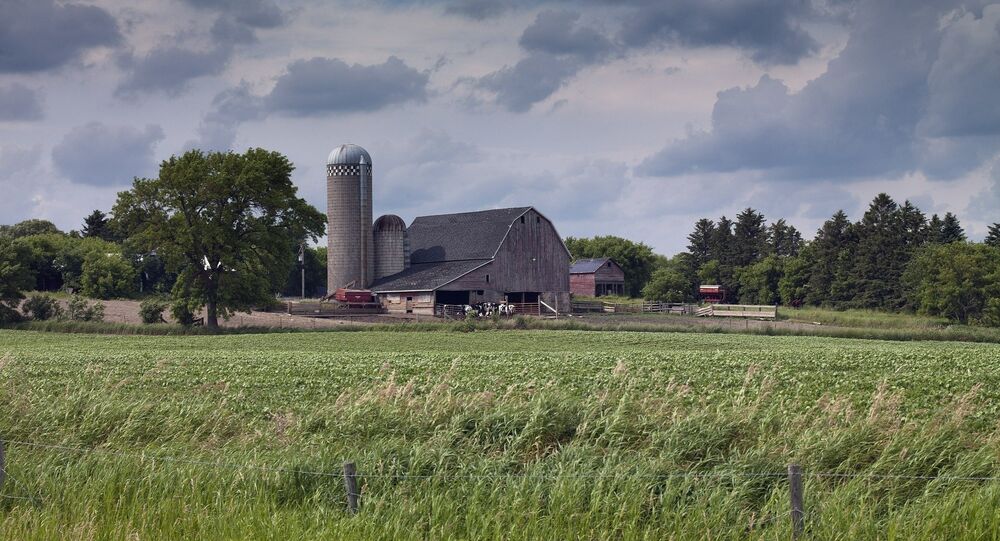 Amidst a severe drought in parts of the US, many farmers are struggling to stay afloat as international trade deal and excessive reliance on governmental subsidies undermine the competitiveness of the nation's agriculture.

Kristian Rouz — US agriculture is going through its worst period in over ten years of profitability decline amid disruptive droughts and otherwise severe weather conditions in different parts of the country, low crop prices in the market and tighter credit, resulting in more farmers applying for governmental assistance. Subsequently, the US government-financed relief loan program with a total amount of funds available amounting at $2.65 bln has run out of cash, posing questions of the very feasibility of government-subsidized industries, with market competition pressures offset by an imminent bailout perspective. On his part, the US presidential candidate of the Republican party, Donald Trump, is poised to capitalize on the news, opposing international trade deals amongst other policies of the current administration, which he sees as the main reason for the farmers' struggle.

© Flickr / ctj71081
Whither the Policy: Next Week’s Fed, BOJ Action to Define World Economy Movements
US Department of Agriculture (USDA) announced the agency is seeking new capital sources in order to help farmers finance their debt obligations until Washington's approval of new liquidity injections into their subsidy programs later this year or in 2017.

At this point, USDA has provided no detail on what sources of funding they might consider for their subsidy financing.

Amid severe drought in parts of the country, many farmers will not be able to service their obligations in the near-term, whilst USDA subsidies are a last resort measure ensuring the nation's agricultural sustainability. Albeit earlier this year US farmers recorded third-largest harvest in crops since World War II, sustainably low corn prices offset the positive effects, resulting in subdues increases in revenues for the agriculture sector.

Such a situation, critics point out, is due to the downside effects of multiple trade deals the US have with their trading partners overseas, resulting in lower prices on agricultural products on the domestic market. Meanwhile, within the Federal Reserve's current monetary tightening cycle, it is increasingly hard for the farmers to serve their obligations amidst market pressures and weather mishaps.

© Flickr / nikzane
US Manufacturing Weakens Despite Unemployment Declining to 3-Month Low
Subsequently, Donald Trump will hardly miss a chance to point out foreign trade vulnerabilities and the inefficiency of governmental subsidies as providing only limited and shaky effects on the industry's overall sustainability. In the so-called "battleground" US states, where the competition for the votes between the two major parties is particularly gory, Trump's outlook on agriculture finds a lot of positive feedback as his market-based sustainability narrative sounds more promising than the faltering at best current governmental practices of keeping agriculture at below market level on bailout funds. As these funds deplete, the entire industry is poised to crumble, stirring widespread anxiety among farmers, aligning themselves with Trump as a consequence.

Just one month ago, the USDA's Farm Service Agency (FSA) expected they would have enough funds to finance farmer relief till at least 1 October.

"At this time, there are already tens of millions (of dollars) in backlog in Direct and Guaranteed operating loan accounts, and that number is expected to increase through the end of the fiscal year," the FSA said in a statement.

All that means many farmers will have no options but to rely on charity or go out of business. Either way, this will negatively affect the overall growth, a yet another downside effect of low commodity prices and lack of protectionist trade barriers such as customs tariffs during the times of the approaching economic downturn.

"Corn has a bigger buffer," Don Roose, president of the West Des Moines, IA-based U.S. Commodities, said. "It's going to take yield adversity to buck the overall bearish trend of the corn market. You're down to weather."

In June, the FSA has already expanded their balance sheet with the Congress's silent approval, adding $500 mln in emergency funds to their emergency trust of roughly $2 bln, thus contributing to the current value of the agriculture bailout bust of $2.65 bln. The FAS in currently helping some 113,000 farmers, providing them with funds aimed at property purchase or refinancing or compensating for their operating costs, totaling at $23 bln accumulated over the years. Meanwhile, farm and ranch families account for 21 mln people, suggesting the super-expensive bailout scheme is only providing relief to a sheer minority of farmers, whilst drought and low crop prices hit everyone.

On their part, agriculture lenders, typically, smaller farm banks, are also seeking the federal government's assistance as many their clients can't serve their obligations, resulting in the rising volumes of non-performing loans (NPLs), further impairing the US agriculture.

In such an environment, Trump's realistic "you can't bailout everyone" vision and "market-level feasibility as cornerstone for a longer-term sustainability" narrative is meeting an increasingly positive feedback amongst an ever-growing share of economically active public.