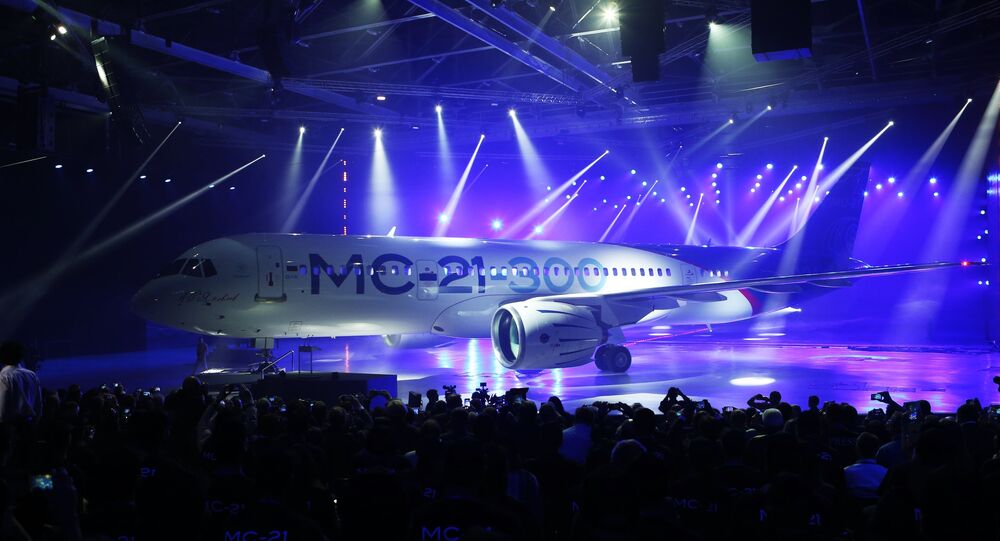 The Farnborough Airshow 2016, the world’s largest civil and defense aerospace exhibition, will kick off on July 11. This year, Russia’s participation in the event will be very limited.

This year, United Aircraft Corporation will present only its civil production, including the MC-21 passenger plane. No real model of the new airliner will be displayed though.

The MC-21 was presented at the Irkutsk Aviation Plant on June 8. The name "MC-21" stands for the mainline aircraft of the 21st century. Initially, it was a modernized version of the Yak-242, updated for new materials, engines and electronic systems. This bid won the 2003 tender for a new medium-haul passenger aircraft.

Then, the aircraft was expected to hit the market in 2016. However, now it is expected to start commercial flights in late-2018. But the terms are likely to be delayed which is routine for civil aviation. Usually, several years pass between the presentation and the first commercial flight, like it was with the supersonic Concorde, the Airbus A380 and the Boeing 787 Dreamliner.

After the airliner was unveiled many experts said it would compete with Boeing and Airbus planes.

In particular, the MC-21 is expected to surpass its main rivals in capacity, aerodynamic specifications, take-off weight. But all of this is to be developed and tested during test flights.

Currently, the market niche of medium-range narrow-bodied passenger aircraft is dominated by the A320 and Boeing 737.

In addition, new players are coming to the market. For instance, China is also developing an aircraft to take the niche, the C919. In addition, Bombardier has its CSeries.

© Photo : Irkut Corporation
Russia's MC-21: Boeing to Face Potential Challenger in the Skies
At the same time, China does not have a well-developed school of civil aircraft making. Its aviation industry is a new-comer, with models mainly based on foreign achievements, particularly copying Soviet aircraft. But the plan to develop a 158-174-seat airliner is a signal that the MC-21 would not be able to hit the Chinese market. The C919 was unveiled on November 2, 2015. As for now, the manufacturer, Commercial Aircraft Corporation of China, has collected 517 orders.

Bombardier’s CSeries includes two models, CS100 and CS300. They have 100-160 seats. For the company, the project is an experiment since Bombardier never built such large planes.

But the main competitors for the MC-21 are Boeing and Airbus.

Boeing is now producing the B37MAX, the fourth generation of the Boeing 737 medium-haul airliner. In May, the company reported it had collected 3,213 orders from over 50 airlines.

Politics creates additional difficulties for the Russian airliner. The MC-21 was presented at a difficult time. When the project was launched no one could predict sanctions. The MC-21 project has nearly 20 foreign companies, including Eaton, Honyewell, Goodrich, Pratt & Witney, Thales, and Meggitt. Russian companies are now trying to replace foreign-made components, but it will take time. Political tensions may also create difficulties for further promotion in the global market.

Furthermore, there are two commercial reasons why global airlines may not be very enthusiastic about the new plane, an article by the Carnegie Moscow Center think-tank.

First, airlines are interested in minimizing the costs per an operational hour. These costs depend not only on the plane’s technical specifications but also on the maintenance and repair infrastructure of the manufacturer of the plane.

Second, the main concern for an airline is safety and buying a new aircraft is always risky.

"It’s too early to assess the MC-21 or compare it with the rivals. The aircraft will have to undergo flight tests and certification. The first result will appear only after the first shipment of 100 planes is delivered to the market," Borys Rybak, director of Infomost consulting company, said.

First of all, Russian airlines are now the main potential buyers for the MC-21. Currently, 175 orders have been collected for the aircraft, many of them from Russian airlines. For example, state-controlled Aeroflot (with its subsidiaries) has ordered 50 planes. UTair has ordered 10 aircraft.

The manufacturer also expected that MC-21 planes will be in demand from state institutions, including the Defense Ministry, the Federal Security Service, and the Emergency Ministry.

Russia is also considering delivering the MC-21 to foreign markets. For example, Russia may offer the plane to the countries it has military-technical contracts with.

Among the possible buyers are Egypt (six MC-21 planes have been ordered) and Iran.

By 2025, Russia plans to become the third-largest aircraft manufacturer in the world. Particularly, Russian companies plan to take a 3.2 percent share of the global market of civil aviation. The MC-21 is going to be a crucial part of this plan.