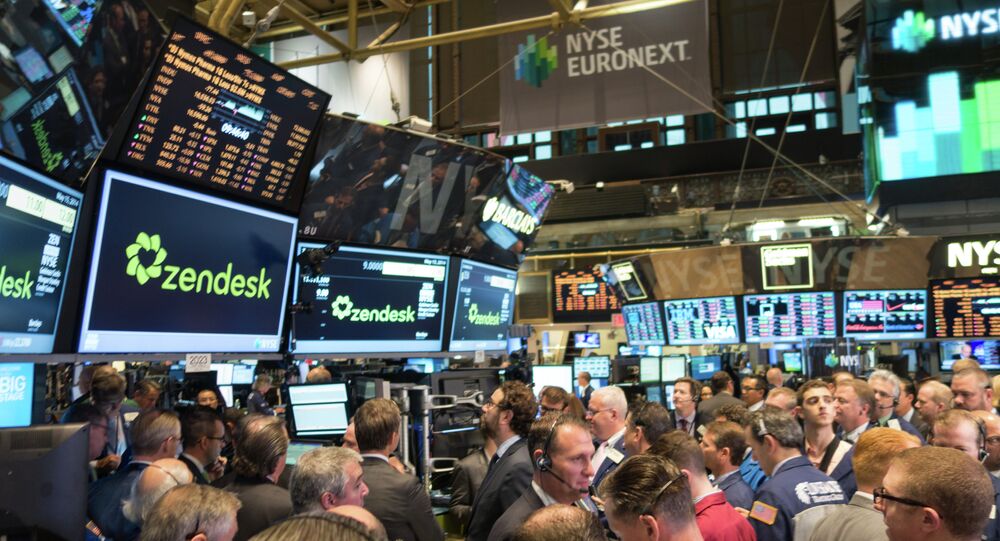 On Friday, yields on sovereign bonds from the Netherlands became the latest to turn negative, contributing to an unprecedented $13 trillion of negative-yielding debt that has fueled fears of a new global financial crisis.

© Photo : pixabay
New Debt Crisis Beckons for 'Unstable' German Banks as EU Faces Next Financial Meltdown
A growing pool of negative-yielding debt is raising fears of a new financial crisis, which may have been stimulated by more cheap money having pooled in financial markets.

Since the 2008 financial crisis, central banks around the world have tried to stimulate their economies by introducing more electronic money. However, the rise of negative bonds yields to unprecedented levels has led to concerns that the money has just delayed an inevitable crash, and is even doing more harm than good.

On Monday Deutsche Bank strategist Jim Reid told clients that Dutch bonds are now offering the lowest rates the country has seen since it began keeping records in 1517.

The yield on the Netherlands' ten-year government bonds fell as low as minus 0.007 percent, having fallen about 30 basis points since the UK's Brexit referendum on June 23.

The Netherlands' negative bond yields place it in an 'elite' group of 14 nations in which investors are effectively paying to be indebted; among them are Germany, Japan, Sweden and Denmark. Others, such as Latvia (0.5 percent) and Taiwan (0.7 percent) are also moving in the same direction.

Jim Reid made reference to the unprecedented nature of the financial situation in February, when he warned that yields on corporate bonds might follow suit.

"Even the most bearish strategist might have laughed loudly at the thought of negative corporate bond yields even a couple of years back," Reid wrote in a note to the bank's clients.

"All thoughts on this very welcome."

According to Bank of America Merrill Lynch, there is currently more than $13 trillion in sovereign bonds with negative yields. Before the Brexit vote there was $11 trillion, and in mid-2014 there was barely any.

In 2015 global debt was $199 trillion, an increase of $57 trillion since the end of 2007. According to a study from the McKinsey Global Institute, since 2007 debt-to-GDP ratios have increased in 22 of the world's most advanced economies, in many cases by more than 50 percent.

Many experts believe that the rising debt levels are unsustainable, but the unpredictability of the timing and form of a possible financial crash reflect the unparalleled nature of the current situation.

"Ultimately, there will be a day of reckoning," said Erik Weisman, chief economist at MFS Investment Management, Stocktrader.com reported.

The unprecedented trend towards negative yields, coupled with rising share prices, appears to illustrate that rather than encouraging investors to stimulate the economy by investing in riskier assets, the increasing capital liquidity injected in recent years by central banks and electronic money has contributed to more market instability.

Since 2008 major central banks like the US Federal Reserve, the European Central Bank, the Bank of Japan and the UK's Bank of England have engaged in quantitative easing, creating trillions of dollars to encourage banks to make more loans.

Many of the possible consequences of the tactic, such as eventual jumps in interest rates or inflation, have yet to be seen. A jump in inflation may happen if the money begins to rapidly circulate in the economy. One of the reasons why that has not occurred could be because most of it has remained on financial markets, creating the conditions for another crisis.

© Sputnik / Alexandr Demyanchuk
Banking on Growth: American Millionaire Sets Sights on Rise of the Ruble
A global study published in 2014 by the Official Monetary and Financial Institutions Forum (OMFIF), a central bank research and advisory group, revealed that "a cluster of central banking investors have become major players on world equity markets," as a result of low interest rates and resulting poor revenues.

The report identified $29.1tn in market investments, including gold, held by 400 public sector institutions in 162 countries.

The revelation intensified fears that the liquidity injected by central banks to stimulate national economies is being used by the same banks to invest in equities, helping to form another stock market bubble like that which burst in 2008 following a sustained period of low interest rates and cheap credit.