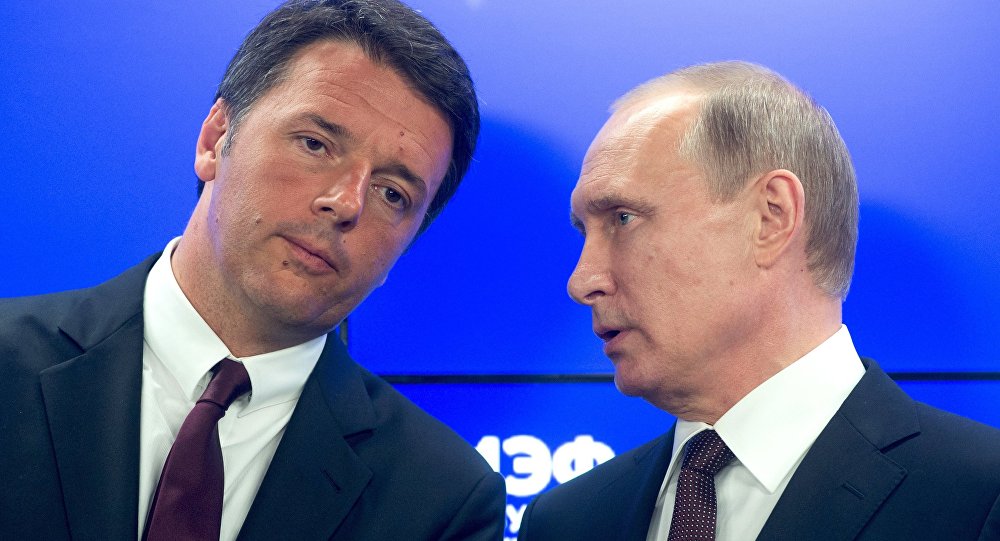 The billion euros in contracts secured by Italian Prime Minister Matteo Renzi at the St. Petersburg International Economic Forum (SPIEF) two weeks ago is a paltry sum compared to the damage inflicted on Italy by the sanctions war between the EU and Russia.

© Sputnik / Alexandr Vilf
Thousands Protest in Italy's Verona Against Anti-Russia Sanctions Extension
In 2014, relations between Russia and the European Union soured amid the crisis in Ukraine. Brussels, Washington and their allies introduced several rounds of anti-Russian sanctions over Crimea's secession from Ukraine and for Russia's alleged meddling in the ongoing Ukrainian conflict, prompting Moscow to retaliate with sanctions of its own.

According to the Italian newspaper La Stampa, these developments, amplified by the ongoing economy crisis and sagging oil prices, have caused a ‘perfect storm’ that dealt a severe blow to Italy, causing the volume of Italian exports to Russia to decrease by 3.6 billion euros – from 10.7 billion in 2013 to 7.1 billion in 2015.

Even though the country's Prime Minister Renzi claims that Italy seeks to "build bridges and not walls," Brussels keeps extending the anti-Russian sanctions and Rome doesn’t protest too much, the newspaper remarks. In fact, the only request Italy made as it cast its vote in support of continuing sanctions was to ensure that the decision wasn’t made automatically but was accompanied by political debates.

Manlio Di Stefano, Italian MP from the opposition party Movement of Five Stars (M5S) and a member of the parliament's Foreign Affairs Committee, has denounced the prime minister’s actions and argued that Italy can't afford to lose such an important partner as Russia.

"We support the withdrawal of sanctions, but Renzi sold himself to Brussels and the United States and extended them, despite his statements made during SPIEF-2016," he said.

Meanwhile, Italy's regional parliament in Liguria has adopted a resolution calling for the Italian government to lift sanctions against Moscow and to recognize Crimea as part of Russia. And while the initiative was originally proposed by Lega Nord party, even the supporters of the pro-government Democratic Party chose to support it, resulting in a unanimous vote.

In the meantime, sanctions continue to take their toll on the Italian economy. Three northern regions of Italy – Lombardia, Emilia-Romagna and Veneto – were hit hardest by the ongoing economic standoff, losing 1.18 billion, 771 million and 688 million euros respectively.

Furthermore, data compiled by the Vienna Institute for International Economic Studies reveals that the sanctions war has already cost Italy 0.1 percent of its GDP along with 80,000 jobs; and if the current trend continues, the country may lose an additional 0.44 percent of GDP and 215,000 jobs.

While things are likely to improve by 2019, the short-term perspective remains pretty bleak, the newspaper surmises.