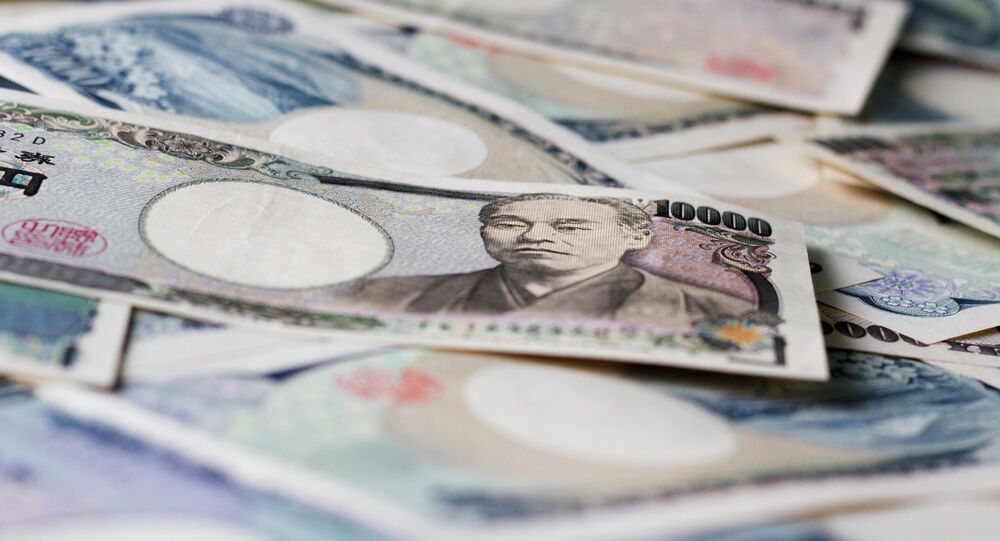 Japanese authorities are considering another round of monetary and fiscal stimuli aimed at boosting economic growth as post-Brexit anxiety impairs the performance across most sectors, despite the influx of money into bonds and national currency.

Kristian Rouz – Even though Japan has enjoyed a massive influx of investment capital amid global economic uncertainty this year, pushing the yen’s FX rate to multi-year highs, expansion in real economy has been unimpressive thus far and the unfavourable post-Brexit environment prompted Prime Minister Shinzo Abe to put together a new plan of policy responses to mounting risks.

© AFP 2021 / STEPHANE DE SAKUTIN
Japan to Work Closely With G7 to Minimize Impact of Brexit on Markets
An across-the board policy action, promised by Abe on Wednesday, might steer the Japanese economy away from dropping into a recession again, yet, the yen’s strength and the weakening export potential remain a persistent threat to the nation’s economic sustainability.

Prime Minister of Japan Shinzo Abe addressed the Bank of Japan (BoJ) on Wednesday, discussing the utter necessity to implement a more decisive policy response in order to minimize the spillovers produced by Brexit to the nation’s economy. Amid the negative interest rates regime (NIRP), further monetary easing seems pointless, so Japanese policymakers might reassess their approach to the understanding of economic stimuli (monetary and fiscal) and their immediate effects or absence of such to salaries and wages, prices and inflation and labour market and consumer spending, all underperforming thus far.

Retail sales in Japan dropped 1.9 percent in May year-on-year, compared to previously expected slide of 1.6 percent, the government reported.

"A sense of uncertainty and worry about risks remain in the markets," Abe said during his meeting with BoJ, the second in less than a week following the UK’s referendum.

"I want the BOJ to support financial intermediary functioning by providing ample funds to help Japanese firms operating in Britain and other companies in need of funds," Abe told the policymakers.

For roughly two decades, Japan has been facing the same economic issues, balancing of the verge of disinflation and recession, trying to address the issue of aging demographics impairing labor market performance, a 400 percent debt-to-GDP ratio, and, now, NIRP being a concern rather than a solution, too.

"Consumer spending has been stagnant and the trend is likely to continue for a while due to sluggish growth in wages," Hidenobu Tokuda of Mizuho Research Institute noted, outlining another issue, preventing Japan from readjusting its economy from reliance of exports of manufactured goods to domestic consumption.

Abe also addressed Finance Minister Taro Aso, suggesting a close monitoring of currency market dynamics as necessary amid the massive global buyout of the yen: the Japanese currency is now poised to strengthen further along with gold and the US Treasuries.

The Japanese government, Abe said in his message aimed to reassure real economy investors, is adamant in its intent to support the broader economy and smaller businesses, in particular.

However, given the monetary response to economic shocks has exhausted its impact to the real economy, with even NIRP failing to stave off the yen’s appreciation, Japanese authorities have limited options for boosting the economy. Fiscal stimulus is still a powerful tool, yet, the heavy burden of governmental debt also imposes limits on its usage.

Meanwhile, the Japanese bond market has rallied far beyond the Nikkei stock index this year, with 40-year governmental bonds having risen 50.5 percent, and the Nikkei index declining 16.95 percent since NIRP was introduced in late January – a discrepancy of 67 percent. This is an indication of loss of faith in monetary policy impact to the economy among market participants.

"At the moment Japanese banks are equipped fully with dollars and foreign currencies," Kuroda said. "I don't think there's any problems at all with Japanese banks' dollar funding."

Meanwhile, the new round of fiscal stimulus might include up to $97.7 bln in governmental expenditures as soon as in mid-July, following the elections. It was a similar measure that pulled Japan out of recession early this year.