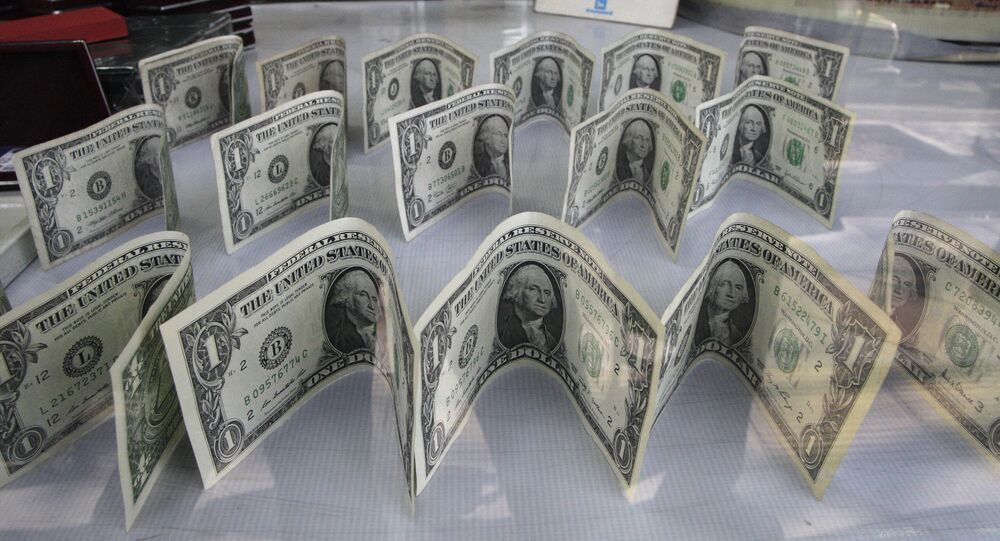 Amidst hardly encouraging macro data, the US economy is bound to underperform throughout this year, with longer-term limits to growth potential still lingering.

Kristian Rouz – The most recent US macroeconomic data brought little encouragement to the overall outlook for this year, supporting the case for the IMF’s growth forecast downgrade for 2016 and Fed Chair Janet Yellen’s cautiousness in her assessment of the state of the economy.

With jobless claims at their lowest since 1973 and a slight pickup in the low-end segment of the housing market, coupled with a modest rebound in manufacturing confidence, the downside tendencies still prevail, with labor participation rate at just above 62 per cent, a slump in demand for top-notch properties, and an ongoing actual contraction in manufacturing slaughtered by overseas competition.

© REUTERS / Jim Urquhart/File Photo
Moody’s: Trump Business Practices Would Ruin the US Economy
The International Monetary Fund (IMF) cut its forecast for US 2016 growth yesterday. All of the aforementioned likely indicated the Federal Reserve would refrain from any interest rate hike at all, if not roll their funds rate back to near-zero or into the negative, as inferred for Yellen’s congressional testimony.

US jobless claims dropped to their 43-year lowest during the week ending on the 18 June, a positive signal per se, yet, after a dismal gains in payrolls last month such a development looks hardly encouraging, suggesting more people have given up looking for jobs, with the labor participation rate declining gradually.

According to the Labor Department report, the total amount of first-time unemployment claims dropped 18,000 in the aforementioned week to a season-adjusted 259,000. It has been 68 consecutive weeks of jobless claims holding below 300,000, indicating a solid job market in terms of labor statistics, however the US labor participation rate at just above 62% is at its lowest since late 1970s.

US housing market, one of the main segments of the non-financial “real” economy, has been struggling amidst tighter monetary conditions as the entire industry is heavily dependent on domestic lending on both the demand side (mortgages) and supply side (development loans). According to the most recent Commerce Department figures, single-family home sales slumped 6.0 per cent in May to a season-adjusted 551,000 from April’s multi-year highs. Overall, however, new home sales added 8.7 per cent year-on-year, hovering near nine year highs as consumers have been rushing into taking on mortgages amidst further Fed rate hikes speculation.

Yet, it is the lower-end segment of the housing market gaining momentum, according to a separate report by Zillow. Gains in prices for the cheapest housing outpaced those in high-end segment twofold: prices in the top 30 per cent of the market added an annualized 4 per cent compared to that of 8 per cent in the bottom market segment.

© Flickr / frankieleon
Confidence in US Economy Dips Amid Presidential Election Campaign Turmoil
“The top of the market is starting to stabilize, and people are beginning to take notice,” Svenja Gudell of Zillow said. “Buyers looking for entry-level homes are having bidding wars in many markets, while it’s not uncommon for high-priced homes to stay on the market a few months longer.”

An insignificant rebound in manufacturing sentiment for June also provided little optimism, with Markit’s preliminary Purchasing Managers’ Index (PMI) rising to 51.4 from 50.7 as US exports gained their most since autumn 2014. Readings above 50 indicate expansion, whilst those below that are a sign of contraction.

"The three months to June has seen the worst quarter for manufacturing in terms of both production and employment growth since 2009," Markit said.

Even though the PMI reading might suggest a looming pickup in US manufacturing activity due to a weaker dollar and slightly higher overseas competitiveness, US manufacturing output is down 0.5% quarter-on-quarter. Higher uncertainly in the economy, recession anticipations, weak inflation hindering domestic consumption and a yet-expanding balance sheet deficit render US manufacturers cautious in terms of potential business expansion.

Amidst all of the aforementioned, the IMF’s downgrade in US growth assessment to 2.2% from the previous estimate at 2.4% for this year suggests a hardly inspiring picture further down the road.

“A confluence of forces…will weigh on the prospects for continued gains in economic well-being” unless the US government shifts its approach to economic policies, the IMF concluded.