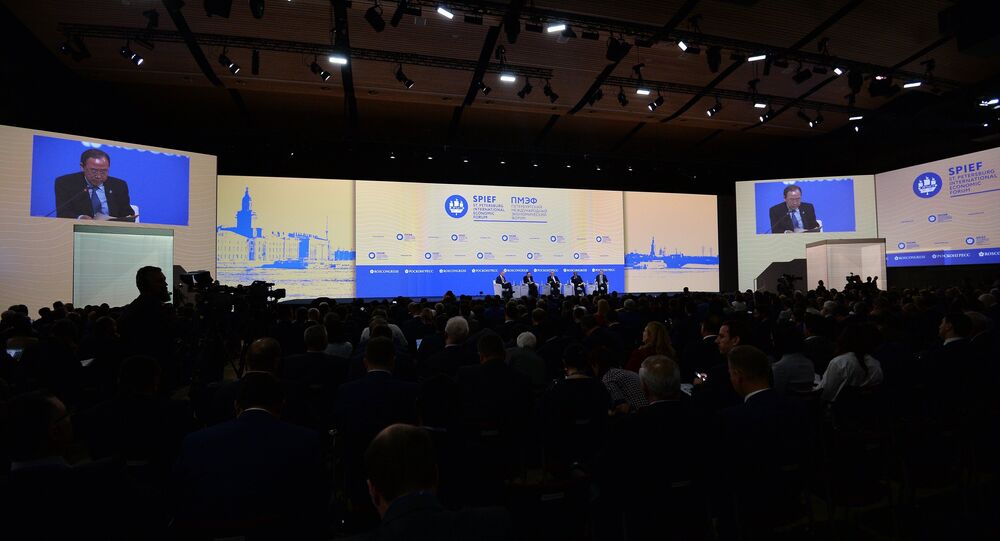 © Sputnik / Ramil Sitdikov
Over 330 Agreements Worth $15.7 Bln Signed at SPIEF 2016
Zhang Yichen, CEO of CITIC Capital Holding Limited, one of the largest Chinese state investment corporations, told Sputnik that while his company has only just begun assessing the Russian market, the prospects so far look quite promising.

"Our company came to the St. Petersburg forum to study the investment climate in Russia and to make new contacts. I believe that the projects offered by Russia look very promising. There are plenty of areas one could invest in: agriculture, technology, research, even real estate," he said.

His assessment was echoed by Liang Xinjun, vice chairman and CEO of another major Chinese investment company, Fosun International Limited.

"We've invested several hundreds of billions of dollars in Russia during the last 2-3 years, and our investments remain stable. We invest mostly in healthcare and entertainment – areas that always pay off. We’ve purchased a considerable number of shares and bonds issued by Russian companies, and I consider all of these companies to be commercially viable," he said.

Liang Xinjun also added that his company also intends to take part in developing the tourist infrastructure of Crimea, and to invest in tourism in other regions of Russia like, for example, Lake Baikal.

"There a plenty of sights to see in Russia, and Chinese tourists would gladly visit them," he explained.

Meanwhile, Guo Ping, CEO of Huawei Technologies, said that Russia had been one of the first foreign markets his enterprise had expanded into: in 2017 the company will mark the 20th anniversary of its presence in Russia.

"During these 20 years we’ve made significant progress, both in business and in consumer spheres. And I believe that our presence in the Russian market has also reaped considerable benefits… I hope that Huawei products will contribute to the IT development of Russia," he said.

The St. Petersburg International Economic Forum (SPIEF) is an annual event that invariably draws the attention of major companies across the world. This year the forum was attended by a number of prominent dignitaries, including European Commission President Jean-Claude Juncker, Italian Prime Minister Matteo Renzi and a host of executives from the world's leading companies.