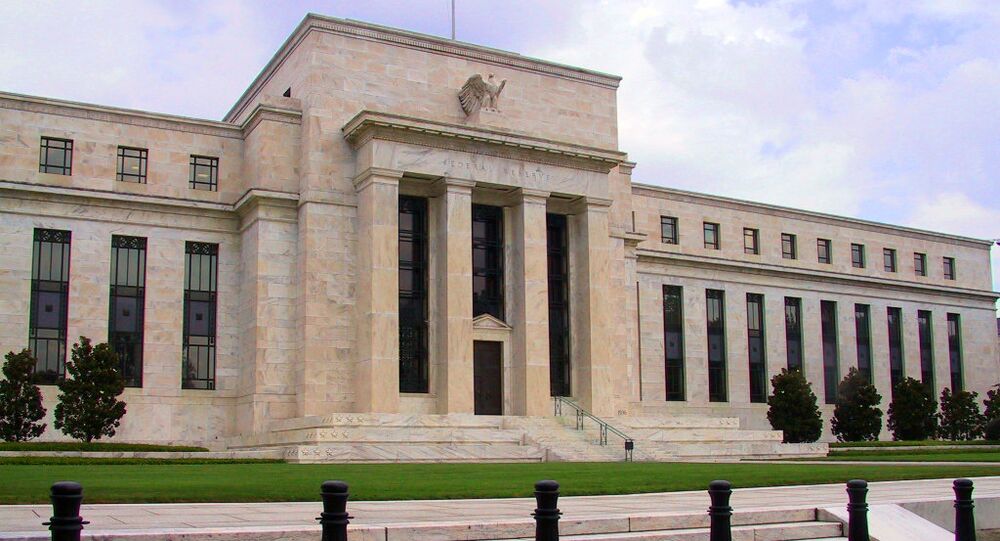 History has seen a number of secretive agreements which had major impact on the global economy, from hiding investments to taking gold reserves. Some of the stories are real, and some are rather legends.

Here are some examples of how global financial decisions have been made behind closed doors.

According to the agreement, Kiev would abandon a moratorium on the sale of land and increase electricity and gas tariffs, Timoshenko said.

"This document is secret. The government and the president signed a secret agreement behind the back of the Ukrainian people," Timoshenko said.

© Sputnik / Alexei Furman
Updated Memorandum With IMF Not Ready - Ukrainian Finance Ministry
However, soon afterwards the Finance Ministry rebuffed the allegations, saying that the final text of an agreement with the IMF is not yet ready. According to the ministry, the final document will be published within a month.

Meanwhile, Kiev has been part of an IMF program of financial aid. The plan has resulted in a twofold increase in tariffs on gas, hot water and heating.

The program presumes $17.5 billion of aid to Kiev. In March 2015, the first tranche of $5 billion was unveiled. Kiev received the second tranche of $1.7 billion in August 2013. However, the third tranche of financial aid was delayed due to political turmoil in Ukraine. But after Prime Minister Arseniy Yatsenyuk resigned the IMF reaffirmed its readiness to work with Kiev.

In late-May, details on a mysterious deal between Washington and Riyadh were unveiled. After the Arab-Israeli War of 1973, the members of the Organization of Arab Petroleum Exporting Countries proclaimed an oil embargo in response to Washington's aid to Israel which led to the "first oil shock."

As a result of the crisis oil prices quadrupled, inflation soared, the stock market crashed and the future of the US economy hung in the balance, according to Bloomberg.

© CC BY 2.0 / Ryan McFarland / $10 and the US Treasury
US Treasury Reveals Saudi Arabia Holds $116Bln in US Debt
Then President Richard Nixon sent William Simon, newly appointed US Treasury secretary, to the Middle East. The goal of the mission was to reach a beneficial financial agreement with Riyadh.

In addition to a possible economic collapse, the US was concerned over the growing Soviet influence in the Middle East. At the same time, Riyadh sought a secret agreement because it did not want to make public its ties with the US, a supporter of Israel during the war.

As a result, the deal was struck behind closed doors. The US and Saudi Arabia agreed to invest petro-dollars in US treasuries. According to the US Treasury, Riyadh holds $116.8 billion in US debt, making it among the top dozen foreign nations with US obligations.

In the era of global conflicts and turmoil in the middle 20th century, gold reserves were actively moved. When Europe plunged into the war many European nations transported their gold reserves to the US. However, the USSR also held foreign gold.

© Sputnik / Vitaliy Bezrukih
Gold Fever: Why Investors Rush to Buy Gold
Some of the Spanish gold reserves moved from the country during the Civil War of 1936-1939 arrived in the Soviet Union. Moscow supported the Republicans with arms supplies as well as sent military advisers to the country.

Everything related to moving Spanish gold was wrapped in a mystery. In October 1936, representatives of the Republican Government asked Moscow to take into custody part of Spanish gold reserves.

Nearly 510 tons of gold packed in 7,800 boxes were loaded onto four Soviet vessels and moved via Odessa to Moscow, to be stored at the Soviet Finance Ministry.

Russian and some Spanish historians say that Moscow did not lay its hands on the yellow metal, spending it to help those fighting against Franco.

The Kanzkerakte (German: "Chancellor Act") is a conspiracy theory about a purported agreement between Germany and the US on German gold reserves.

Supporters of the theory say that on May 21, 1949, the United States and the Federal Republic of Germany signed a secret agreement which granted the US and its Western allies total control of German media and its reserves of precious metals until 2099.

© Sputnik / Vitaliy Bezrukih
Gimme My Money Back! Germany Continues Repatriation of Gold Reserves From Abroad
Because of the agreement, Germany cannot be considered a sovereign state and its economy is purportedly controlled by the US Federal Reserves, the theory says.

Indirect proof of its existence is the fact that every single German chancellor since 1945 made an official visit to Washington shortly after coming into office.

Germany started creating its gold reserves after World War II. Currently, parts of them are stored in the US as well as in Britain and France. By 2020, the Central Bank plans to return to Germany only 50 percent of the reserves. The system has repeatedly been criticized in Germany due to the lack of transparency. Some people even fear that the reserves are still in safe custody.

Now, according to the Central Bank, Germany has gold reserves of 3,400 tons, the second-largest after the US. The bank has denied the Kanzlerakte as a conspiracy theory. In 2015, Berlin returned 210 tons of gold.

© Sputnik / Oleg Lastochkin
Going for Gold: Russia, China Ditch Billions of Dollars for Prized Bullion
During the war, US allies in Europe paid Washington for weapons and military equipment with gold. As a result, the US collected the world’s largest gold reserves. In 1938, they reached 13,000 tons. By 1945, they increased to 17,700 tons, and in 1949 to 21,800 tons.

At the time, the US dollar became an equivalent for gold because its exchange rate was tied to the price of gold (one troy ounce of gold was $35). The situation resulted in the Bretton Woods monetary system which made the US dollar a global payment tool and a reserve currency.

But in the 1960s, European and Asian countries restored their economies while the US economy began to slow down. The Bretton Woods system was in crisis. A heavy blow was dealt by French leader Charles de Gaulle.

During his presidency, a number of reforms were implemented in France which boosted the national economy. France issued the new franc, worth 100 old francs and for the first time in many years, France had a stable currency.

© REUTERS / Leonhard Foeger
Return of Gold Standard: Why Soros is Buying the Precious Metal
De Gaulle did not trust the dollar, describing the American currency as green pieces of paper. In 1965, he said that an international exchange system should be based on gold, not the dollar. He asked Washington to exchange $1.5 billion in cash for gold from French reserves.

Washington started to pressure Paris as its NATO ally. Finally, France withdrew from NATO military programs. During his visit to the US, de Gaulle requested that Washington exchange $750 million for gold. The exchange was made and by the end of 1965, the French held only $800 million in dollars, from the initial $5.5 billion.

Then, the central banks of Japan, Canada and European countries began exchanging dollars for gold in the US. In 1971, Germany exchanged $5 billion and withdrew from the Bretton Woods system. By July, US gold reserves dropped below $10 billion, and on August 15, 1971, President Nixon issued an order making the dollar inconvertible directly to gold.