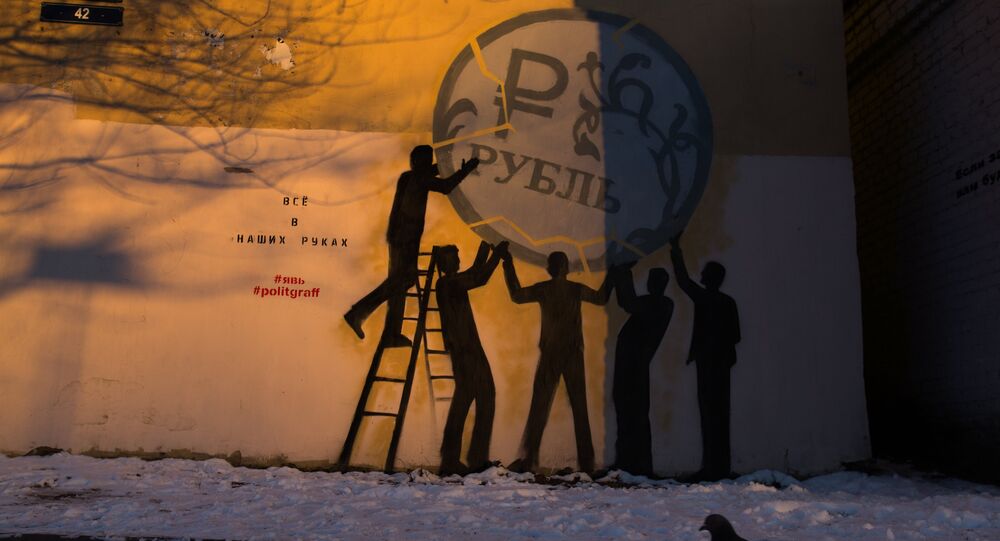 Russian officials have learnt all the right lessons from previous crises, and their response to the recent low oil prices and economic sanctions will result in the greater strengthening of the Russian economy, according to Yossi Dayan, head of markets for BCS Global Markets.

“That Russia is already adjusting to this radically changed landscape is an early sign of the gains to be had from seizing the new opportunities,” Yossi Dayan writes in his article for The Telegraph.

© Sputnik / Vladimir Sergeev
We Want to Lift Them: French FM Ayrault Speaks Out Against Anti-Russia Sanctions
The author further elaborates that low oil prices and economic sanctions are the two major challenges facing the Russian economy. However paradoxically, they are also “key factors driving reforms from which the Russian economy will emerge greatly strengthened.”

The author then analyzes how the fall in the price for crude and the need to reduce external debt as a result of sanctions, “have combined to give powerful momentum to reform.”

First of all, it was the decision in November 2014 “to float the ruble, which has allowed the currency to take the hit in terms of absorbing much of the market response to the crisis.”

Of course, it is not “a cost-free option,” he adds, and has already resulted in higher price rises and a consequent reduction in living standards.

However the official forecast suggests that inflation, which rose in 2015, will further decline this year and, more importantly, next year.

© Sputnik / Alexei Danichev
An End of Dialogue in the Dark? What Could Signal a Thaw Between Russia, EU
The Russian political model, “has proven to be more stable than, for example, the Brazilian.”

For investors, the author explains, “this stability and predictability has costs but also some benefits.”

In part, he explains, it can be credited to low and falling unemployment and cites the data of the Federal State Statistics Service, which states that the jobless total declined steadily from 5.5 million in 2010 to 4.1 million in 2013 and 3.9 million in 2014.

Another key element of reform in Russia occurred in the capital markets, he says.

“Under the auspices of the Central Bank of Russia, the Moscow Exchange was strengthened to give the country its own, world-class financial-system capability,” the author explains.

The results of this reform can be seen in the net profits of the finance sector, which having fallen 1.6 percent  below their 2008 level in 2014, bounced back strongly to record an estimated 660.6 percent in 2015.

However the author acknowledges that more needs to be done.

“A top priority must be the control of inflation,” he suggests.

“Alongside inflation there is the need to tackle reform to social benefits such as pensions,” he adds.

And finally, “the privatization of public sector monopolies has a vital role to play.”

© Sputnik / Vladimir Pesnya
Lavrov: Moscow Considers Anti-Russia Sanctions an 'Opportunity'
“We expect to see the first wave of privatization to come to the market in the later part of this year. We also expect the government to continue pressuring companies they control to disburse more of their profits through higher dividends,” he explains.

This view was echoed on Tuesday by Russian Foreign Minister Sergei Lavrov, who reiterated that Russia views the economic restrictions imposed against it as a “window of opportunity that must be used to strengthen food and technological security, as well as to diversify Russia's economy, broaden foreign trade channels and create alternative financial accounting systems.”

"I would say that the issue of when the anti-Russian sanctions are lifted is irrelevant for us. It was not us who imposed sanctions and we will not discuss any criteria or conditions. The only issue relevant for us is how efficiently we use the current situation in the interests of our economy and development," Lavrov said during a live linkup on kp.ru news portal.