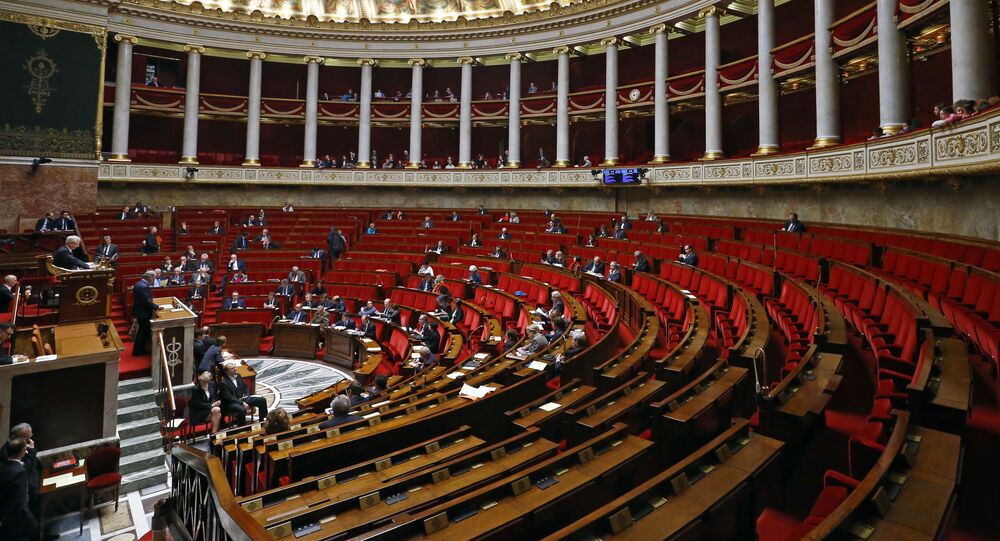 French parliament adopted a bill banning employers from sending e-mails to their staff outside of work hours, in an attempt to stop work interference with people's private lives in a measure that has drawn harsh criticism from both political left and right.

Kristian Rouz — French parliament has just passed legislation prohibiting employers from sending e-mails to their personnel outside of work hours, a measure seen by the unions and the Socialist-led government as protecting the workforce from stressful situations when not at work.

© REUTERS / Jean-Paul Pelissier
French Unions Announce Strikes Against Labor Reform in May, June
The bill has drawn massive criticism as potentially impairing overall economic productivity, whilst the recent wave of disruptive union activity with massive strikes across the nation has posed questions as to the overall efficiency of the government's economic policies. However, the bill's supporters argue, since the employee is not at work anyway, it hardly makes sense disturbing them with work-related matters, as such a practice does not enhance an employer's productivity, but takes up an employee's time — unless the latter is forced into overtime work in such a manner.

French companies with 50 and more employees are bound by the new law to abstain from sending work-related e-mails during the fixed evening and weekend hours, when personnel are not supposed to be at work. President Francois Hollande's Socialist Party claims the move will improve the quality of life for the French workforce, insisting that in the digital era the issue of "permanent connectiveness" has resulted in people abusing each other's time via online messaging. Therefore, since an employee is only paid to undertake certain effort in particular hours, conveying any work-related matters outside of work hours via email takes the employee's time to read and consider, and is illegal.

"All the studies show there is far more work-related stress today than there used to be, and that the stress is constant," Socialist MP Benoit Hamon said. "Employees physically leave the office, but they do not leave their work… The texts, the messages, the emails — they colonise the life of the individual to the point where he or she eventually breaks down."

Despite a sound initiative, the new law, dubbed the "right to disconnect," might bear negative consequences for labour productivity. The proper life-work balance the French socialists have been struggling to achieve, having previously enacted a 37-hour workweek and banned any work between the hours of 9pm and 6am for most companies, is still akin to utopian idealism. The recent wave of union activity disrupting transportation across France has demonstrated the lows of life satisfaction among the French workforce.

The "right to disconnect" law might impair businesses' performance in case of emergencies, with not being able to inform certain employees, typically senior staff, of certain situations in a timely manner that might incur trouble for the entire company.

© Flickr / Crystian Cruz
South Africa's Land Expropriation Bill Stirs Economic Concerns
Certain employees might be willing to solve work-related issued outside of work hours out of their professional ambition, which is another concern. The prohibitive law might effectively undermine individual incentive, leading to promotions. Besides, critics argue, the high rates of unemployment in France (10.3% as of March 2016) might be partially stemming from the government's policies aimed at improving the work environment. More jobs would inevitably mean inferior work conditions, and vice versa.

The new law might also impair the competitiveness of certain French businesses working in a 24/7 environment, such as IT firms and financial sector enterprises. In these industries, employees have to respond to emerging challenges regardless of time of day or night, as there is a constant flow of information from across the globe, with businesses competing for their profits with companies from the US, China or Australia, all in different time zones. Blacking out entire French industries for long hours might deal a fatal blow to the French IT and finance.

"The topic of work-related well-being is much larger than simply stopping email after-hours," said Jon Whittle of the UK-based Digital Brain Switch research project. "Email is just a medium used to communicate. The real problem is the culture of having to constantly do more and constantly do better than competitors."

However, the "right to disconnect" law has drawn a fair amount of criticism from the political left as well. Left-wing opponents say the law will undermine the unions, jeopardize employee rights and exacerbate youth joblessness and underemployment.