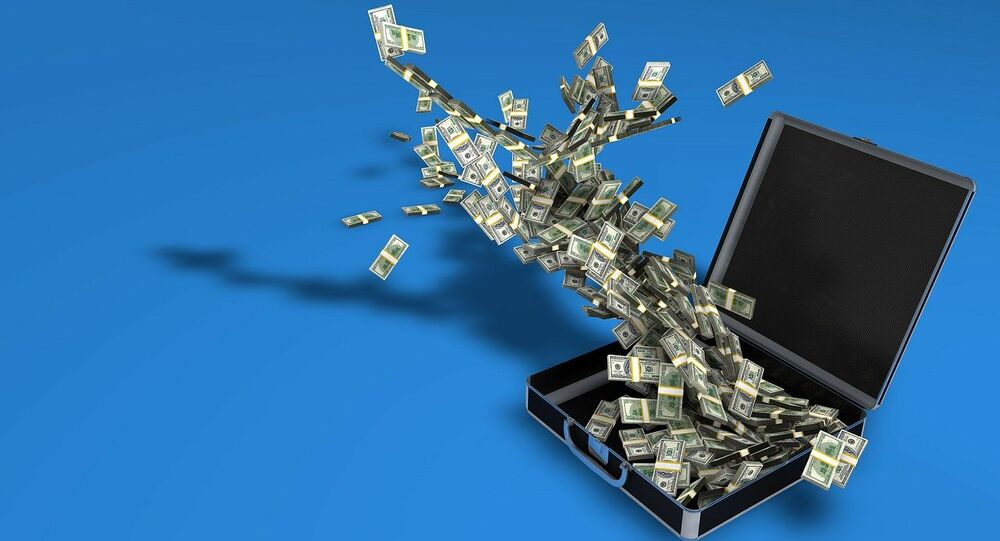 One of the riskiest financial market tools, credit-default swaps on US 10-year Treasuries, hit their multi-month highest, suggesting an increased risk of the US piercing its debt ceiling, or a sovereign default, or a dollar devaluation in the coming months amidst the risks of recession, electoral uncertainty, Brexit, and hike in Fed funds rates.

Kristian Rouz — The probability of a US default of its debt hit its highest since the Federal Reserve hiked rates in December, as indicated by the recent dynamics in sovereign credit-default swap (CDS) agreements, amidst expectations the central bank might raise borrowing costs further in the coming months. After the Fed turned increasingly hawkish on their policy outlook since late April, market volatility has increased, with stocks swinging between gains and losses, and US Treasuries sliding along with the dollar. Systemic risks stemming from the CDS transactions are rising amidst the unfavourable global financial environment, meaning not only the US, but its counterparts are also subject to greater turmoil in the coming months, as possible Fed hikes, Brexit concerns, US elections and faltering global growth are all interconnected factors, contributing to the recent spikes in US sovereign CDS spreads.

© AFP 2021 / BRENDAN SMIALOWSKI
US Economy Picks Up Moderately on Jobs, Housing, While Manufacturing Sags
CDS spreads on 10-year US Treasury bonds jumped to 38.720 in late May from their early March lows at below 33.000. The reading is highest since at least mid-January at 38.000. Meanwhile, the 10-year Treasury yield slipped for the month, whilst gaining year-on-year in May, suggesting higher market volatility for the first time since a massive capital wipeout hit Wall Street in January following the Fed rate hike the previous month.

Fluctuations in CDS spreads reflect both default and devaluation risks, meaning the dollar is experiencing downward pressure stemming from the bond market dynamics. Whilst the Japanese yen has become investors' preferred safe haven asset in the currency market, the greenback is poised to slip slightly unless the Federal Reserve clears its stance on policy moves in the near-term.

US credit-default market is a highly speculative environment, with participants explicitly buying debt cheaper only to sell it dearer afterward, and it attracts major attention only during crises or on higher crisis expectations. Amidst a heightened rumination of a possible US default, the creditworthiness of the US government was once again put into question after presidential candidate Donald Trump made his critical remarks on debt in early May.

"I would borrow, knowing that if the economy crashed, you could make a deal," Trump said. "And if the economy was good, it was good. So, therefore, you can't lose."

Subsequently, CDS spreads went up. Investors tend to buy CDS when they expect the US government could exceed its debt ceiling. Republicans are traditionally sceptical of raising the US debt ceiling, and with the GOP controlling the Congress, and Donald Trump leading over other candidate in the recent nationwide polling, CDS are naturally meeting a higher demand.

"Maybe this is just a form of black swan insurance: buying US government CDS is a way of making money when everything else plunges in value," Felix Salmon of Fusion Media Network wrote. "You're not really insuring against an actual default, you're just betting that if the world starts to implode, the price of your CDS is going to rise even higher."

An actual sovereign default might be a more distant perspective, and might be avoided via increased inflation, as recently noted by mainland China's policymakers, and/or excessive money printing, as outlined by Trump. However, the recent gains in CDS spreads have contributed to increased instability in the US financial markets, bearing risks of a "domino effect", should at least one participant in CDS trading default. The toxicity of the situation is exacerbated by the fact that the US government is part of the chain. Chains in CDS transactions or "netting," involve several parties, each buying CDS at a higher yearly premium, with all parties dependent on each other meting their contractual obligations.

© REUTERS / Kevin Lamarque
US 1Q16 Growth Revised Upward as Fed Gears Up for Rate Hike
The US governmental bonds market, meanwhile, is still attracting substantial capital inflows, and, opposite to common sense, when the government's creditworthiness is questioned, the value of Treasury bonds goes up on the rising demand. Partially, the paradox is best explained by the fact US governmental bonds have proven as one of the most stable assets in the market, and even when stocks are collapsing, US Treasuries provide a moderate, yet, stable income to investors. That said, even if a default hit the markets, US debt would not lose in value.

The CDS spreads dynamics, however, suggest in near-term the risks of a dollar devaluation are higher, particularly so if the Fed protracts on their next hike in rates. However, as higher market volatility is forcing more investors into bonds, the CDS are likely to rise further at least until after the Brexit vote, and a likely Fed hike in July. Whilst August might see a slide in CDS, the US election hysteria in the autumn, and a possible hike in December, as well as the risk of a recession, might push CDS up higher again closer to the year's end.

That is, not to mention the looming debt ceiling debates in the increasingly Republican environment. All in all, the dollar's FX rate is the likeliest victim of the impending turmoil.