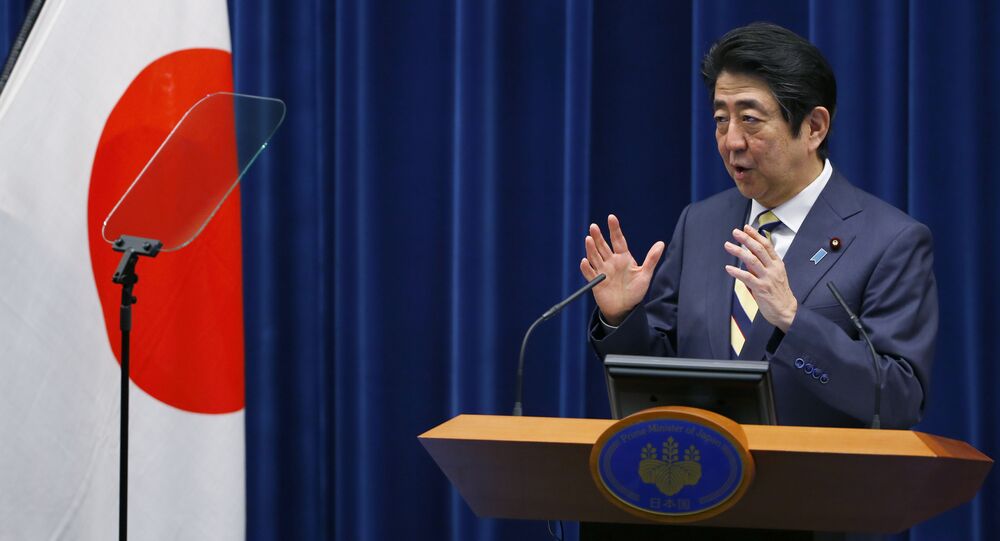 Japanese Prime Minister Shinzo Abe, having warned of the looming global recession on Friday, was reported to have planned a massive structural reform based on an expanded fiscal stimulus that effectively pulled Japan out of the late-2015 recession in the first quarter this year.

Kristian Rouz — After a significant acceleration in Japan's economic growth in 1Q16, stemming from greater budget spending and loose tax regime, the government of Prime Minister Shinzo Abe is intending to postpone its planned increase in sales tax till 2019. Given the Bank of Japan's (BoJ) monetary policy measures have by now exhausted their positive impact to growth, with the yen climbing against the dollar despite negative BoJ interest rates, the Japanese government has seemingly decided to rely on the more efficient fiscal stimulus measures.

Aside of the delay in sales tax hike, the Abe government proposed a roughly $90 bln increase in overall fiscal stimulus, hoping to further boost domestic consumption in order to make up for the loss of the zaibatsu revenues in international trade.

© AP Photo / Shizuo Kambayashi, File
Japan Skirts Free of Recession as Abenomics Gains Momentum
Long-pending plans to further increase sales tax to 10% from the current 8% are likely to be further delayed in order to spur economic growth, as indicated by several reports from governmental sources. Japan's Finance Minister Taro Aso and secretary general of the ruling Liberal Democratic party Sadakazu Tanigaki met with Prime Minister Abe on Saturday, and subsequent media reports suggested the sales tax hike would be delayed till October 2019. On Tuesday, Abe is scheduled to deliver his revised plans aimed at acceleration of economic growth, and fiscal stimulus is likely to be the focal point of Abe's new economic policy.

Previously, the Abe government hiked sales tax from 5% to 8% in April 2014, resulting in a significant plunge in Japan's consumer spending. However, at that time, the yen's weakness allowed for international trade benefits to compensate for the slowdown in domestic consumption. This time around, with the yen facing strong market demand as safe haven asset amidst higher global financial volatility, the Japanese government has to be particularly cautious regarding measures directly affecting domestic economic affairs.

On Friday, Abe noted an even greater-scale instability might hit the global economy fairly soon, partially explaining the remodelling of the Japanese economy toward being driven by domestic factors.

"There is a risk of the global economy falling into crisis if appropriate policy responses are not made," Abe said during a news conference following Friday's G7 summit. He noted that Japan "must reignite powerfully the engine of Abenomics," the plan designed to end the stalemate of weak growth and near-disinflation, plaguing the Japanese economy for over two decades.

Simultaneously, Abe is poised to increase his fiscal stimulus package by 10 trln yen ($90.7 bln) after the surprisingly positive developments in the first quarter, when Japan exited a yet another recession by solid gains in domestic consumption. As reported by the Nikkei newspaper, the fiscal stimulus will include construction of a magnetic-levitation train line between Nagoya and Osaka, direct government-funded measures aimed at boosting consumer spending, and a raise in salaries for select categories of governmental employees, such as nursing care workers.

"When you want to get the economy going, as long as demand in Asia is weak, you need additional public spending," Martin Schulz of Tokyo-based Fujitsu Research Institute said. "Since private spending is still not picking up, the government is simply taking up the slack."

© REUTERS / Lee Jae-Won
Burglar’s Dream: Japanese Stop Banking, Hoard Over $368 Billion at Home
Abe is expecting a new massive recession in global economy, as he mentioned after the G7 summit, a financial turmoil similar to what followed the "Lehman collapse" in 2008 might unravel soon, he warned. Loosening of monetary conditions is not helping growth in any of the major economies any longer, meaning structural reform are necessary, and Abe's planning, to be unveiled on Tuesday or Wednesday, is allegedly massive in scale and depth.

Aside of the expanded fiscal stimulus, Abe intends to achieve a budget surplus by March 2021. Currently, 30% of Japan's governmental finance is funded by borrowing in the form of bond issues.

Whilst international headwinds are affecting Japans' exports, industrial production and inflation, lower consumer prices coupled with fiscal measures could propel economic growth at a lower cost to the budget. Apparently, Abe intends to sway from the export-driven growth in favour of consumption, yet, Japan's excessive reliance on imports might undermine structural reform, as a solid presence in international trade is something Japan will hardly be ever able to avoid.