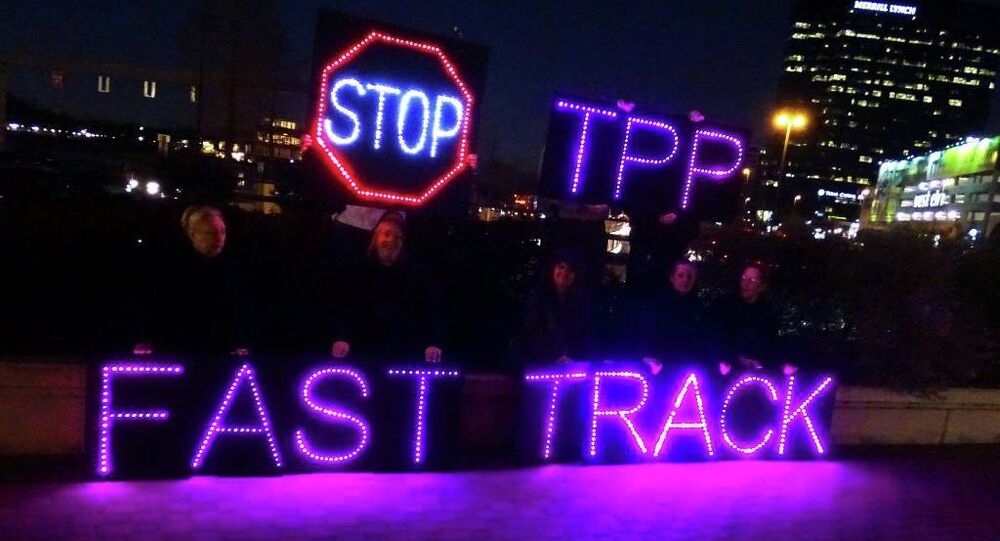 Over 1500 organizations, including labor unions and environmental groups, have called on the US Congress to reject the hotly-debated TPP deregulation deal. Radio Sputnik discussed the controversial trade deal with one of its harshest critics, US Senator Elizabeth Warren.

In a letter to Congress on Monday, the organizations point out that the deal, made in unusual secrecy, will kill US jobs, endanger food safety and the public health system, as well as take a toll on the environment.

According to Warren, the US was barely able to survive the "disastrous" impact of the NAFTA agreement, which also negatively impacted Mexico, after both countries lost jobs to China. Warren notes that, should the secretive TPP deregulation deal come into effect, additional jobs in the US will be lost.

Warren also noted that, under the TPP, no corporate entity is bound to the sovereign rights of a nation in which it does business. She noted that, countering the 1500-organization letter to Congress, corporations have stepped up their lobbying efforts in the form of a separate letter, endorsing and supporting the deregulation agreement.

Noting the opaque language of the deregulation deal, Warren suggests that the TPP will grant corporations "sovereignty" over nations, especially in terms of labor protection, minimum wage and environmental safeguarding. Companies will also be able to challenge food safety inspection procedures.

Under the TPP, environmental restrictions could be overridden, Warren warns. Providing Japan's high demand for liquefied natural gas (LNG) as an example, Warren says TPP will encourage more fracking in the US, as the US has major amounts of gas that could be mined using fracking technology, which is currently restricted due to environmental damage.

Asked which nations would profit from the TPP, Warren said there were none. "I honestly do not believe," she said, "that there will be a single nation that will do well." She also noted that multinational corporations, not nation-states, will benefit from the agreement. With TPP in effect, corporate status will be elevated to practical omnipotence. She points out that all citizens, especially working people, will be exploited, and will largely impact developing countries.