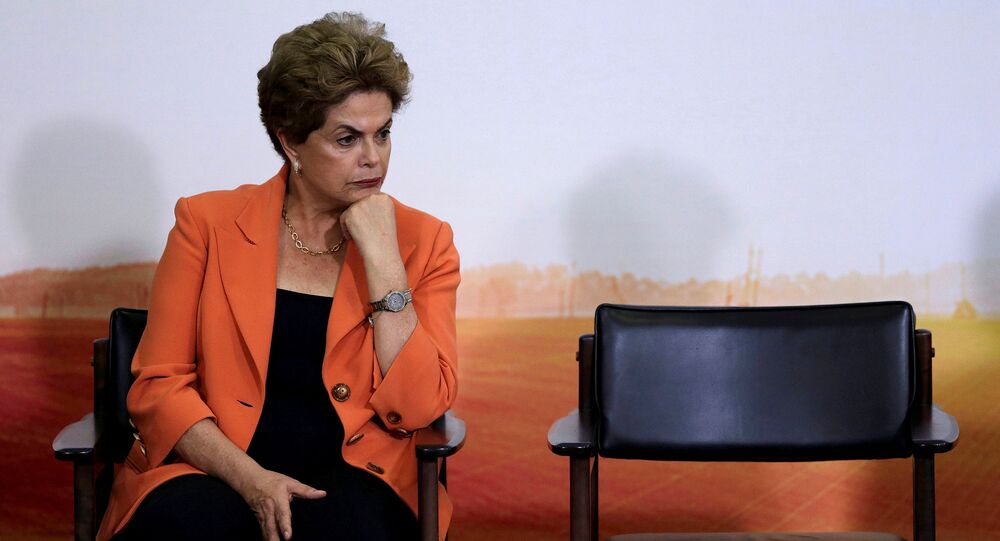 Brazils two-year economic recession has forced Michel Temer's interim government to put forth a large-scale privatization plan, allegedly starting as soon as July and ending in 2018, that would result in a productivity boost and bring an end to the costly recession, however, it will all be buttressed with massive layoffs and increasing poverty.

Kristian Rouz — The Brazilian economy has struggled with recession throughout 2014 and 2015 amidst declines in raw material prices and is on to major structural shifts after the nation's president Dilma Rousseff was impeached by the Senate in mid-May. The left-leaning Rousseff administration, plagued with corruption allegations, had drawn harsh criticism for its inefficiency regarding economic policies, and interim president Michel Temer has repeatedly vowed "hard but necessary" reforms to boost economic productivity in order to exit the recession.

The new government unveiled its first steps to privatize a large number of state-controlled assets in order to enhance the economy's overall market viability. Yet, the reforms are likely to entail personnel layoffs and will result in spiking unemployment, undermining Brazil's individual consumption and broader living standards.

Brazil's government announced an upcoming round of meetings with potential investors, both domestic and foreign, with privatization of major state-controlled assets being the main point of discussion. The government will hope to attract funds in order to improve the fiscal situation by reducing the budget deficit, whilst an emphasis on private sector initiatives would allow for a boost in productivity, seen as two key aspects of the economic reform in the works.

© AP Photo / Richard Drew
Global Banks Struggle Amid Credit Squeeze, Rising Bad Loans
Several showcases, planned by the Brazilian authorities, would advertise select state-controlled assets to private investors, according to a statement by Wellington Moreira Franco, chairman of foreign investment agency in the Brazilian government. Whilst the plan is still in the works, it is yet unclear which particular assets would be first in line for privatization, however, as state-controlled oil and mining and aluminum industries have been worst hit by the recession and decline in global commodity prices, the semi-public oil giant Petrobras might see an increase in private capital involvement.

Jose Serra, Brazil's Foreign Minister, along with Franco, will host several meetings with investors in New York and London, with a possible date of the large-scale advertising campaign set for mid-July.

Aside of Petrobras, the Temer government might sell its stake in one of the nation's largest utility companies, Furnas Centrais Elétricas. Select infrastructure assets might be possibly subject to privatization as well, as energy, utilities and transportation have become a heavy burden to the Brazilian budget during the last years of Rousseff administration, impairing the fiscal outlook and the economy's overall resilience to external and domestic shocks.

"It's time to end with the government monologue and start building solutions with our partners," Moreira Franco said last week after promising transparent regulatory framework and safety guarantees to private investors buying into Brazilian assets.

Last time Brazil indulged in across-the-board privatization was in 1997, when Petrobras was partially sold to private investors, along with other state-controlled assets at that point. This time around, the nation's economy is poised to see an even greater increase of private sector investment, potentially enhancing the performance of many companies. Yet, as cost-saving measures are likely to be enforced immediately following the privatization, unemployment might skyrocket, whilst real disposable incomes of most Brazilians would decrease.

Local media have reported Temer's plan for economic reform would include a privatization of at least 230 power plants, the national postal service, and state-run airports like Infraero among other assets, affecting hundreds of thousands of employees currently of government-funded payroll. The government intends to raise between $10 bln and $20 bln by late 2018 with the hope that the economy would unravel at a fast pace.

The government "plans to transfer to private investors several assets, stakes and companies, although it is still analyzing which and which others will remain in the hands of the state," interim administration said in a statement.

Currently, the Brazilian government own some $568 bln total worth of assets in direct and indirect stakes in roughly 77 enterprises, and the government's initial planning includes partial sales of its stakes in most commercially viable companies most attractive to investment capital. Further down the road, less efficient companies would be subject to privatization as well.

© Flickr / frankieleon
Int'l Currency Trading Slumped 20% in Last 18 Months on Dollar's Strength
The reform plan, however, has drawn criticism for its initial stages, as the privatization will not increase productivity as only the best-performing assets would be sold, whilst all the problem companies will remain a burden to the federal budget for an indefinite amount of time. Yet, looming layoffs and rising unemployment are likely to render workforce cheaper almost instantly, allowing for quicker productivity growth. Meanwhile, investors are still concerned with corruption, while commodity prices are still low, and profitability of the Brazilian utility and infrastructure sectors and negative, resulting in rather low investment appeal of the economy at this point.

That said, major privatization is easier said than done for Brazil, unless the government takes administrative efforts at improving the performance of state-run companies prior to liquidating the assets.