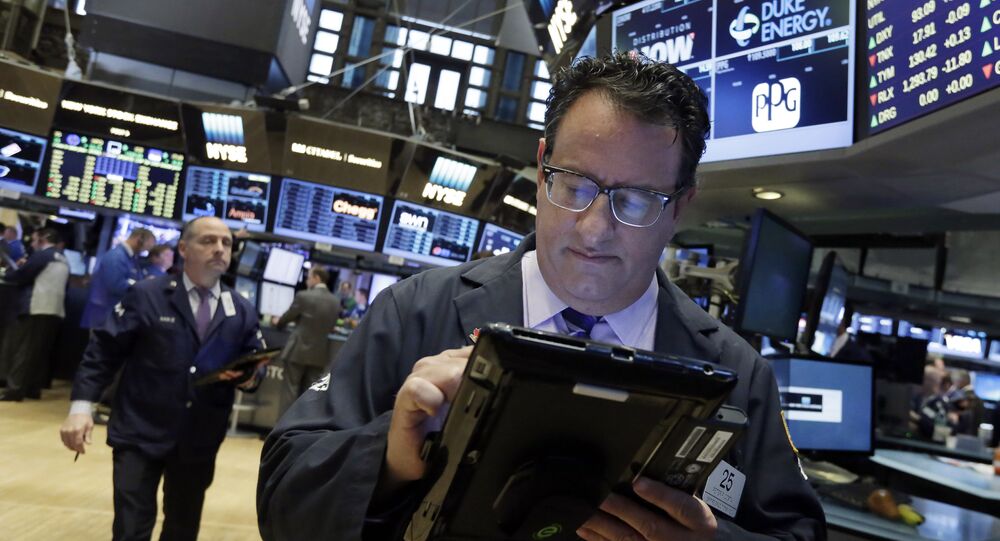 The US Federal Reserve can only afford one or two interest rate hikes this year; hype surrounding a possible June rate increase is ungrounded, as the FRB is slated to meet a mere week ahead of the UK's highly risky Brexit referendum, while market speculation during most of the remainder of 2016 will be dominated by the US presidential race.

Money Has No Smell: How US Dollar Found Itself Backed by Drug Cartels
Kristian Rouz — After a volatile Q1 in the broader US economy, which was characterized by wild stock market swings and a creeping recovery in energy prices, the Federal Reserve is gearing up for a second round of talks to consider monetary tightening. The regulator has mostly scrapped its initial plan for four hikes this year, and market participants are discussing a possible increase in base borrowing costs in June, particularly following the comments of several Fed officials in recent weeks.

However, a hike in US borrowing costs will probably only happen in July, after the risks associated with a Brexit scenario have passed and US election fever is not full-force yet, should the macro indicators be sufficiently encouraging.

The next Federal Open Market Committee policy meeting is slated for 14-15 June, just a week before the June 23 Brexit referendum in the UK. Hence, the excessively cautious regulator is very unlikely to take on the  risks associated with US rates going up, given the possibility that the UK might leave the European Union; a US rate hike coupled with a schism in the EU economy could create a 'perfect storm' of global financial instability.

Nonetheless, on Tuesday, two Fed officials, Atlanta Fed President Dennis Lockhart and San Francisco Fed President John Williams, both confirmed that an increase in base borrowing costs might be an option during the June meeting.

"I think it is a little early at second-quarter data to draw a conclusion, so I am at this stage inconclusive about how I am going to be thinking about June, but I wouldn't take it off the table," Lockhart said.

That said, a hike in rates is coming, though neither Lockhart nor Dudley spoke of international headwinds potentially affecting Fed decision-making.

"I think the incoming data have actually been quite good and reassuring in terms of policy decisions, so, in my view, June is a live meeting," Williams said. In his separate interview, the San Francisco Fed President also said raising rates twice this year "makes sense."

© Flickr / Ars Electronica
'Unhealthy Economy': Why US System Has Nothing to Do With 'Free Market'
As hike speculation is stirring, volatility in stocks on Wall Street increased, with investors ready to withdraw should the Fed provide more substantial clues on the upcoming policy decisions. Fed chair Janet Yellen will deliver her commentary on monetary policy on June 6, and until then the brewing uncertainty will be rocking the markets. With the UK referendum looming just a week after the June FOMC meeting, the overtly cautious Fed might be unwilling to move rates at that point. Brexit anticipation has been a major factor in global market moves since early this year, affecting growth rates in advanced economies and emerging markets alike. A raise in Fed rates, as evidenced by the developments following the December hike, could serve as a massive destabilizing factor as well.

Therefore, the Fed isn't likely to pursue any major policy decision in June, particularly given that US macro data have been only moderately optimistic recently, and the broader economy is facing the risk of falling into a recession. This leaves the possibility of a July hike firmly on the table.

It is yet unclear, however, whether the Fed would be able to hike rates just once or twice this year. While Fed officials have optimistically stated two hikes may be in line, the lack of predictability accompanying the outcome of November elections might render any subsequent hike planning unviable.

"The Fed is going to hike only once, not four times, this year, not even two times," Nouriel Roubini of Roubini Global Economics said at a Credit Suisse Group AG-hosted event in Moscow. In Roubini's opinion, the Fed is a macro regulator "not just for the U.S. economy but also for the global economy," therefore it's "more likely to go more slowly" in its decision-making.

All in all, the next hike in rates in likely to arrive in July, when the window opens right between the massive risk of Brexit and the US elections. Should the Fed be able to afford a second hike this year (i.e. the US economy doesn't slide into recession by then), it won't happen until December.

Why Riyadh 'Dumping' Dollar-Denominated Bonds Will not Derail US Economy

Investor Jim Rogers: ‘Russia is Not Huge Debt Nation Like US, Portugal’