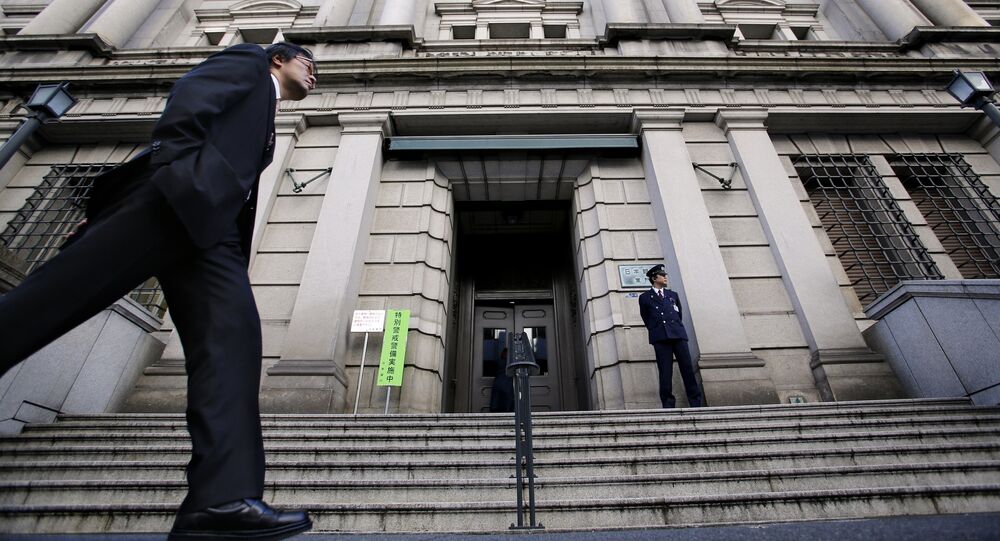 Japan posted surprisingly solid growth figures in Q1 due to efficient fiscal stimulus measures; however, the yen’s appreciation is stirring more risks in the near-term.

© AFP 2021 / TOSHIFUMI KITAMURA
Recharged: Abenomics Lift Japan Out of Recession in Q1
Kristian Rouz — Japan's economy posted its fastest rate of growth in a year in Q1, avoiding a technical recession due to a pick-up in domestic consumption and gaining traction from the fiscal dimension of Shinzo Abe's  'Abenomics' reform plan. Since 2013, Prime Minister Shinzo Abe has been struggling to get his nation out of the deflationary quagmire that it has endured for over two decades, which was marked by protracted stagnation and low productivity.

Now that economic expansion figures exceed the most optimistic expectations, Abenomics might finally be proving itself viable. However, the nation's Q2 outlook is not particularly optimistic, as the recent yen appreciation, which started in January and continued the following month, is hurting the export revenues of the nation's corporate sector. Therefore, an expansion of stimulus is expected from the Bank of Japan (BoJ) as soon as June.

Japanese GDP added an annualized 1.7% in Q1, outpacing previous projections of 0.2% as greater government expenditures provided a massive boost to domestic consumption, which, in turn, is driving the lion's share of the economy.

"Taking into account the effects of the extra day from the leap year, which pushed up the quarter-on-quarter growth rate by 0.3 percentage points, growth is not as strong as the headline number shows," Hidenobu Tokuda of Mizuho Research Institute said. "The GDP data will likely press Abe to decide to delay a planned sales tax hike next year and to roll out additional fiscal stimulus, worth at least 5 trillion yen ($45.76 billion). I also expect the Bank of Japan to ease policy further in July, given weak growth and tame inflation."

Japan's economy was sliding into a recession in late 2015; however, the aggressive fiscal stimulus measures undertaken by the Abe cabinet within the broader reform plan reversed this negative trend. However, there are more macroeconomic challenges the Japanese economy is facing down the road, meaning there is mounting pressure for both further expansion and the more aggressive implementation of the Abenomics plan.

Thus far, the fiscal dimension of the Abenomics pulled Japan out of a late-2015 recession, but the ever-strengthening yen is slashing export revenues of the zaibatsu, stirring concerns of the broader economy's dramatic slowdown in Q2. In order to address the challenge, the Bank of Japan would inevitably have to expand its monetary stimulus program. Meanwhile, in terms of structural efficiency, the Abe cabinet is weighing an increase in the sales tax from 8% to 10% in order to stave off the risk of the economy overheating amidst the ultra-loose monetary conditions.

"One of the lessons over the past year is that monetary policy isn't as effective as it was in the past and might have reached some limits," Martin Schulz of Fujitsu Research Institute said. "So what we will probably see this year is that the Bank of Japan will keep buying government bonds and the government will probably start to spend even more than it did before to support the economy."

Consumer spending drives about 60% of the Japanese economy, compared to 72% in the US and 79% in the UK, meaning Japan is more exposed to international headwinds, particularly those stemming from international trade. That said, the Abe cabinet might safely hike the sales tax, impair consumption performance slightly, albeit, only if the BoJ manages to tame the yen's appreciation beforehand.

Previously, Abe hiked sales tax from 5% to 8% in 2014, instantly pushing the economy into recession.

According to the newspaper Nikkei, PM Abe is nonetheless planning to delay a hike in sales tax given the low efficacy of monetary policy measures. That said, Japan might be moving away from its excessive reliance on exports by increasing the prominence of domestic consumption in its overall GDP growth.