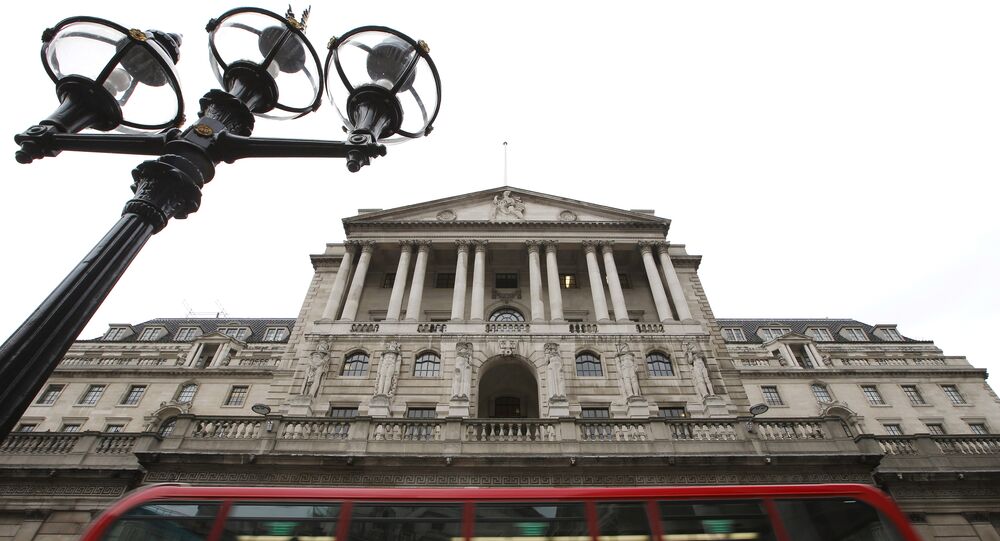 An unlucky combination of Brexit risk, and long-standing market-determined risks to the UK's financial stability are rendering the Bank of England (BOE) unable to react to neither at this point.

© Flickr / Giampaolo Squarcina
Eurozone Economy Accelerates in Q1 Despite Tumbling Into Disinflation
Kristian Rouz — The UK's financial markets, oversaturated with investment capital, might be overheating ahead of the inopportunely looming Brexit vote, as the Bank of England (BOE) is poised to delay any action on monetary policy out of reluctance to give investors a message that could be easily misinterpreted. While the situation demands a hike in base interest rates from the currently ultra-low 0.5%, the BOE is likely to protract on any decision in this regard given the Brexit risk is an already negative factor to the overall growth perspective. With Britain possibly leaving the EU after 23 June, market volatility is rife, and a hike in rates could trigger excessive declines in financial markets, yet, any delay in the current circumstances are bearing risks of assets bubbles.

The BOE Governor Mark Carney will deliver his outlook on policy and a broader economic situation later this week, and with Brexit and possible asset bubble risks in sight, the regulator has found itself between rock and a hard place, unable to act in a situation demanding quicker decisions.

"I can't imagine the BOE would want to give the markets any kind of hostage to fortune," Peter Dixon of the London branch of Commerzbank AG said. "This will be a bit of an interim forecast which says growth is modest, inflation is muted but marginally picking up moderately, and we'll all be dancing around the elephant in the room."

Meanwhile, in the UK's real economy, industrial production is declining and overall growth is slowing as fixed investment falters. The BOE is likely to leave base borrowing costs unchanged at 0.5% on Thursday, as an immediate hike might trigger capital outflows, which the regulator can't have just six weeks away from the referendum.

Meanwhile, the BOE intends to hold three additional sterling cash auctions on 14, 21, and 28 June in order to ensure the stability of the British financial system at the climactic point of the Brexit uncertainty. That said, monetary policy considerations are not the main concern at this point for the regulative decision-makers, a stance that could possibly come at a cost of asset bubbles.

"Unless any UK financial institutions have bet their shirt on an early recovery of sterling it is hard to see what Brexit would do in immediate terms," Stephen Wright of London University's Birkbeck College said.

In the BOR view, an immediate hike in rates could safely follow the Brexit "out" vote, as the pound's anticipated depreciation by roughly 20% in such a scenario could allow for such a move. Thing is, such a policy move would still be six weeks away from now.

© AP Photo / Richard Drew
Global Banks Struggle Amid Credit Squeeze, Rising Bad Loans
George Osborne, the UK's Chancellor of the Exchequer (finance minister) voiced support for such a decision having said in April the increased volatility in the UK's financial markets means that "mortgage rates are likely to go up."

In other words, the policy makers are aware of the tightening of monetary conditions as a necessary step in given circumstances. Yet, as the pound has already weakened by now to $1.45 from its "normal" FX rate of $1.50-$1.60, while low oil prices are hurting growth and inflation, and the labor market is weak, along with dismal gains in wages, a hike in rates could come in handy at this point. Particularly so, as investment capital is abundant.

However, as the European Central Bank (ECB) and Bank of Japan (BoJ) have maintained their ultra-accommodative negative rates regimes, and the US Federal Reserve are protracting on a hike amidst recession concerns,  BOE policymakers are cautious, meaning a decision on rates is nearly impossible ahead of a major event like the Brexit vote.

"Without a shadow of doubt whatever they say is going to be supplanted by the referendum," Commerzbank's Dixon said. "Effectively they're doing this because they're required to do it, but I think we all know it's a holding operation until we can get more clarity."

The policy dilemma the BOE is facing reflects the regulator's insecurity of the immediate consequences of a possible "out" vote on Brexit. The central bank might even loosen its policy conditions briefly, as outlined in Financial Policy Committee's guidelines, providing looser reserve ration requirements (RRRs) to commercial banks immediately after the vote should signs of financial panic emerge. Yet, such a move would push stock valuations dangerously high for the moment, with a high probability of a subsequent collapse. Therefore, a clearly pronounced BOE message on policy is an utter necessity in the weeks before the vote, giving investors a fair warning and time to plan for the policy response to whatsoever scenario the UK will go through in late June.