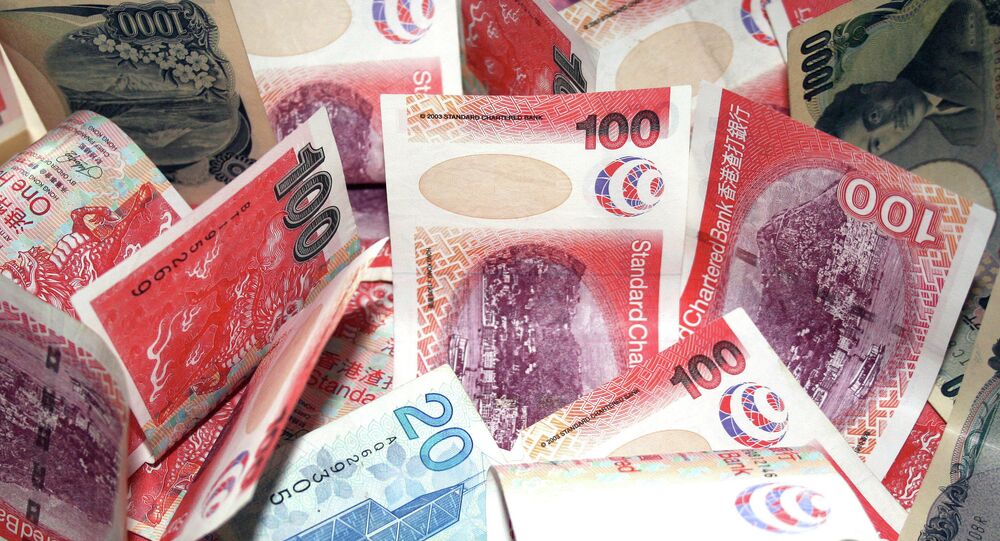 Weak economic growth and the harmful yen's appreciation in Japan became even more alarming concerns after the Bank of Japan (BOJ) left interest rates unchanged instead of the expected expansion of monetary stimulus, resulting in a shock reaction by financial markets at home and overseas.

© REUTERS / Rhona Wise
Structural Inefficiency: Trump Warns of ‘Very Massive Recession' Up Ahead
Kristian Rouz — Bank of Japan (BOJ) left its negative interest rates regime unchanged after a policy meeting on Wednesday, deciding that potential spillovers of an expanded stimulus would pose more risks to the broader economy than any positive effects on growth and borrowing. The move surprised markets and commercial banks, as well as Japan's manufacturers: the export-reliant zaibatsu have recently been hurt by the yen's appreciation, and BOJ going deeper into negative rates territory might have eased pressures on the nation's corporate sector.

Yet, BOJ Governor Haruhiko Kuroda and his colleagues decided they would take longer evaluating the spillover effects of negative rates as the nation's borrowing has faltered under negative rates, while the financial sector might have started to overheat after the regulator first implemented the aggressive stimulus in January.

"The decision came as an utter surprise. I thought the BOJ would ease further today to accelerate the yen trend which had been weakening on expectations for further easing," Hideo Kumano of Dai-ichi Life Research Institute said.

The yen strengthened against a basket of currencies immediately after the BOJ left rates unchanged to 108.32 yen per 1 US dollar from roughly 110 yen per dollar. The regulator's decision, however, had an immediate positive effect on the Japanese stock market, cooling investors' demand for shares thus staving off the market's tendency to overheat into an asset bubble.

"It was inevitable that the yen regained all the losses made on easing expectations. Sure, the market was disappointed, but that does not mean the yen will keep gaining," Koji Fukaya of Tokyo-based FPG Securities said.

The BOJ's current stimulus package was left unchanged along with interest rates, with some 80 trln yen ($732 bln) target of monetary base expansion, primarily, in acquisition of the governmental debt securities. Base interest rates for commercial banks keeping their liquidity at the BOJ are at —0.1, meaning the banks are charged for abstaining from lending and keeping liquidity in reserves. An inflation target of 2% is now within reach by mid-2017, the BOJ said, thus extending the timeframe in this regard, meaning the broader economy would grow at a slower pace in near-to-medium term.

Yet, the expansion in BOJ stimulus is the likeliest possibility by mid-summer: the frustrating pace of growth in the broader economy is hindering gains in salaries and wages, as well as domestic investment.

© Flickr / Japanexperterna.se
Bank of Japan Vows Negative Rates on Credits to Spur Economy
"Kuroda wanted to make it clear the BOJ won't make monetary policy driven by market demands. It's too early to make another move after implementing the negative rate a couple of months ago. The important message is that the BOJ will be data-dependent and I expect they will bolster stimulus in July as they review the outlook of inflation," Kyohei Morita of Barclays Plc. said.

The negative rates regime, introduces in late January and effective full-force in February, stirred a lot of controversy both in Japan and abroad. Neither lending or investment figures ticked up thereafter, whilst the yen even rallied robustly against the dollar, even though an aggressive stimulus typically triggers devaluations as a consequence of abundant monetary liquidity denominated in national currency. Since March 2013, efforts of the Kuroda-led BOJ resulted in yen-denominated monetary base expansion by 170%, but most of the money liquidity ended up in bank reserves and deposits, or the stock market, with lending and investment underperforming. Moreover, even though the BOJ has been charging interest on commercial banks' reserves, they are ready to pay instead of releasing the money as credit lines to domestic businesses. Besides, weak economic growth and lingering near-disinflation prevent potential domestic borrowers from taking loans.

"The reason the money multiplier is falling like a stone is that, even with quantitative easing and negative rates, demand for lending from companies and households remains weak," Shuichi Ohsaki of Tokyo branch of Bank of America Merrill Lynch said. "In a period of low growth, it's hard to force an increase in that demand."

Meanwhile, the macroeconomic data remain weak. Consumer prices excluding food declined their steepest in three years, personal consumption weakened, and manufacturing faltered after a brief resurgence in March. The yen's strength is pushing the Japanese economy back into the mire of disinflation, meaning the BOJ will have to force lending by either going deeper into negative rates territory or imposing particular regulations aimed at spurring growth, similar to those in mainland China, where the central bank has been cutting reserve requirement ratios (RRRs) on commercial banks.