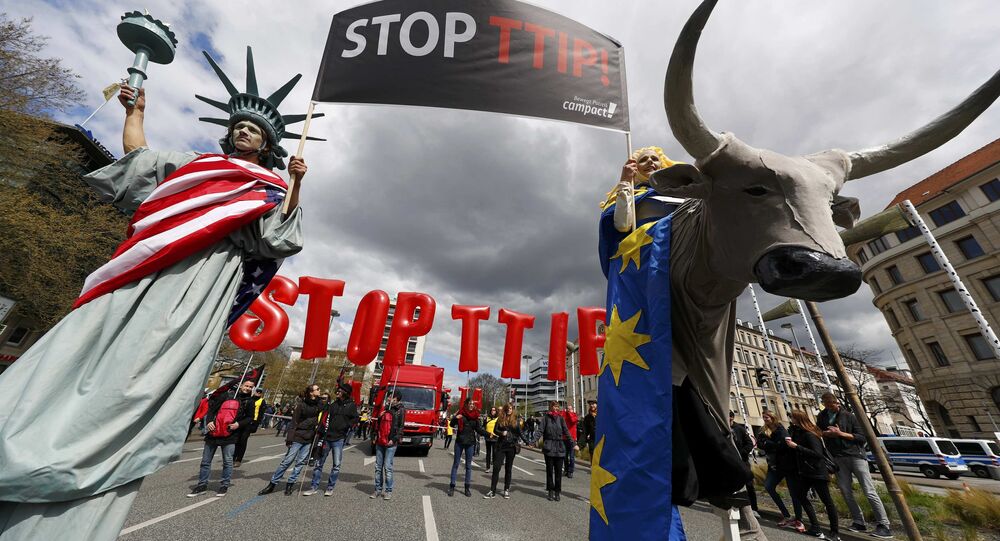 The German Economy Ministry supports the EU-US Transatlantic Trade and Investment Partnership (TTIP) but it will only accept a treaty of "high quality" and the deal in its current form does not meet several conditions, a spokesman for the ministry told Sputnik on Tuesday.

MOSCOW (Sputnik) — On Monday, the 13th round of talks between the United States and the European Union on the TTIP deal, aimed at reducing barriers to trade in goods and services between Europe and the North America, started in New York. The same day, US President Barack Obama said, while on a visit to Germany, that TTIP should be finalized by the end of this year.

"The BMWi [Federal Ministry for Economic Affairs and Energy] supports TTIP and we still hope to finalize the TTIP negotiations in 2016. But quality is more important than finalizing the treaty as fast as possible. We want a treaty of high quality and we will only accept TTIP, if that is achieved," Andreas Audretsch said.

In his words, German Economy Minister Sigmar Gabriel made it clear that "he won't accept TTIP with a private investor-state-dispute-settlement-mechanism (ISDS)," which grants an investor the right to use dispute settlement proceedings against a foreign government.

"Equally he won't accept a treaty, in which the USA insists on the idea of ‘buy American,'" Audretsch added, citing the Comprehensive Economic and Trade Agreement between the European Union and Canada (CETA) as the best example to follow in the TTIP negotiations.

The spokesman added that with the United States being "the most important sales market for the German economy," TTIP could offer big advantages for the German economy, citing one national study conclusion that the per-capita income in Germany could rise by almost 5 percent if the deal were implemented successfully.

© Flickr / Petras Gagilas
TTIP and CETA Would 'Remove People's Rights From Basic Human Needs'
Days before Obama’s visit to Germany, a survey conducted by YouGov for the Bertelsmann Foundation found that support for the transatlantic trade deal had fallen sharply in Germany and the United States.

As the poll revealed, only 17 percent of Germans believe TTIP is a good thing compared to 55 percent two years ago. In the United States, only 18 percent support the deal, down from 53 percent in 2014. The main public concern is that the deal could undermine environmental, health, safety and labor standards.