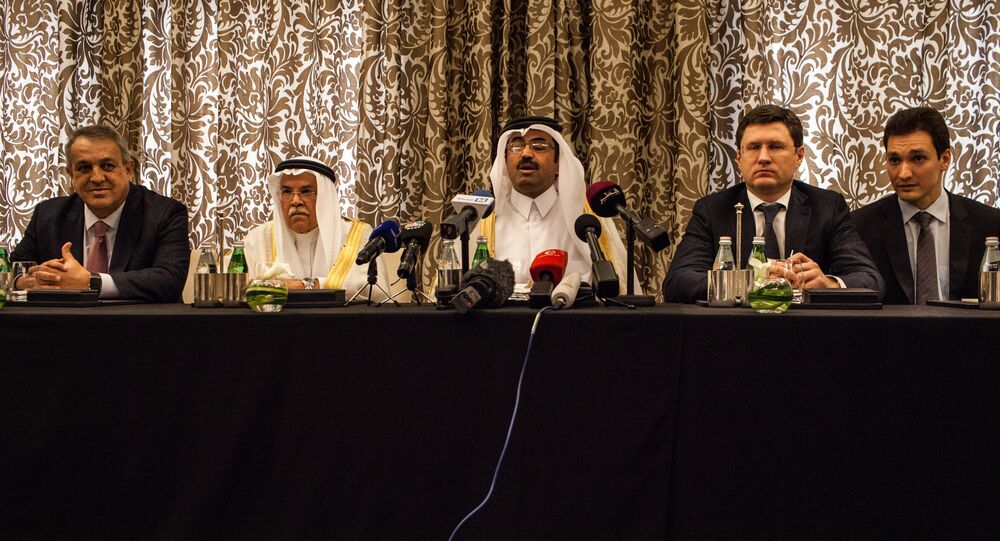 Saudis Refuse to Work With Others, Blame Russia and Iran for Low Oil Prices

Instead of trying to cooperate and find a solution to fix the problem of low oil prices, the Saudi government blamed Iran and Russia for failing to reach an agreement on freezing oil production during a Sunday meeting in Doha, Mohammad Sadeq Joukar, a leading expert of Iran’s Ministry of Oil, told Sputnik in an interview.

According to Joukar, the Gulf Kingdom hoped to see that Russia would force Iran to make concessions in Syria and reduce Tehran's oil output levels.

"By shifting the blame [for failing to reach an agreement on freezing oil production] to Russia and Iran, Riyadh saw an opportunity to stir relations between the two countries. Saudi Arabia expected that Russia would put pressure on Iran in several different areas: cooperation on the Syrian front, military partnership and cooperation on stabilizing the situation in the Middle East," the Iranian oil expert told Sputnik.

© AFP 2021 / KARIM JAAFAR
Fifty Shades of Oil: What Led to Failure at Doha and How Will It Affect Black Gold
On Sunday, negotiators from the world's major oil-producing countries, including both Organization of the Petroleum Exporting Countries (OPEC) members and non-cartel producers, failed to reach an agreement on freezing production levels in talks in Doha, Qatar.

He added that although Saudi Arabia is interested in bringing oil prices up, they shouldn't be too high, because then it would be beneficial for North American shale oil producers. And Riyadh can't afford that, as it seeks to push shale oil producers out of the oil market.

At the same time, the Saudis aren't willing to lose their market share and that's why they refuse to cut down their oil production, Joukar explained.

Furthermore, by artificially keeping oil prices low Riyadh wanted to use the negative economic climate in Russia to make Moscow more cooperative. This, the Saudis hoped, would force Moscow to change its policies in Syria.

Another thing to realize is that Saudi Arabia has a weak culture of diplomacy. If Riyadh has political disagreements with a country in one aspect, then it won't seek any cooperation with that country in other fields, even if it would benefit both countries.

© AP Photo / Susan Walsh
US-Turkey-Saudi Arabia Arm Terrorists with Surface-to-Air Missiles in Syria
"Today, Saudi Arabia has taken the following course: not to lose its share in the oil market and not to give any opportunities to Iran to increase its oil production, or rather allow Tehran to take its rightful place in the oil market," Joukar said, adding that Riyadh's "all or nothing" policy is unwise.

In this situation, a lot will depend on Russia, as even after coming under pressure from Saudi Arabia, Moscow refused to put pressure on Iran. Although Russia is paying the economic price for its willingness to remain true to a good cause in Syria, Moscow gives priority to its political image. Russians are ready to work with any nation in the world that plays fair and isn't using various instruments of political pressure to get what they want, Joukar said.