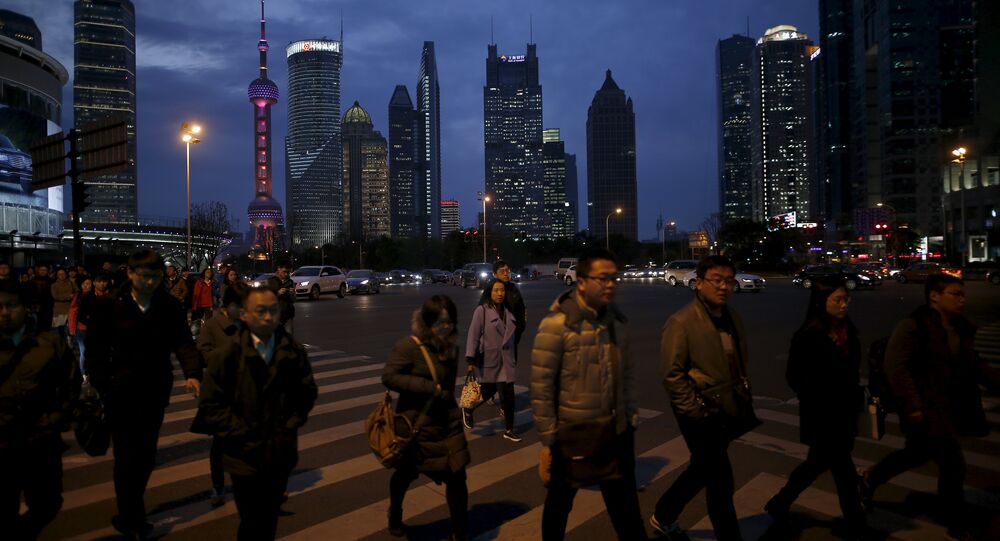 © Sputnik / Pavel Lisitsyn
Good as Gold: Why Russia and China Are Busy Buying Bullion
Kristian Rouz —Standard & Poor's has downgraded China's credit rating outlook from stable to negative, claiming that Beijing hadn't made sufficient progress implementing across-the-board economic rebalancing reforms. The country's heavily-indebted yet export-reliant economy is about to exhaust its borrowing potential as international demand for Chinese-made manufactured goods is lower, prompting factory-gate disinflation in China. Meanwhile, the economic reform, which is aimed at rebalancing the nation's productive forces to be more dependent on domestic consumption, is faltering, and risks are mounting within the Chinese economy. Stock market volatility and the complex situation in the real estate sector only support the S&P outlook as a message to potential investors and creditors: keep out.

According to S&P statement, China's credit rating is now AA-, outlook negative, whilst the longer-term rating is at A-1 plus near-term credit ratings. The country is still rather highly rated in the S&P ratings hierarchy, and China's large economy is believed to be able to absorb most of the risk it is facing now. However, the borrowing capacity of Chinese enterprises, and local and central governments is insufficient.

"We revised the outlook to reflect our expectation that economic and financial risks to the Chinese government's creditworthiness are gradually increasing," S&P explained. "This follows from our belief that, over the next five years, China will show modest progress in economic rebalancing and credit growth deceleration."

An acceleration of economic growth in China could have helped improve the nation's credit portfolio, but that would require robust efforts on the central government's part to provide a more solid footing for further expansion. The mainland's export-reliant economic model is losing its investment appeal, and capital outflows are quite significant. The recent wave of capital carnage in China's stock markets, which slumped to their 4 ½-year lows in February, is also generating downward pressure on the economy, which is already heavily disinvested. Meanwhile, their might be an asset bubble brewing in the real estate sector with housing prices rising by double-digit numbers on a monthly basis early this year, indicating major imbalances in the structure of Chinese economy.

S&P expects the annual pace of economic expansion in China to remain above 6% in the next three years. The nation's GDP added 6.9% in 2015. However, the analysts assessed China's investment rate quite favorably, at above the necessary 30-35% GDP, in part due to huge influx of money in select sectors like real estate, and including money returning from the so-called ‘shadow sector', rife in mainland China.

"In our opinion, these expected trends could weaken the Chinese economy's resilience to shocks, limit the government's policy options, and increase the likelihood of a sharper decline in the growth trend," S&P said.

© REUTERS / Ronen Zvulun
No Time to (Just) Schmooze: China, Israel Commence Free Trade Negotiations
The agency noted that further rating downgrades might be in line should Beijing pursue riskier policies by attempting to spur domestic lending in order to fix the annual GDP growth at 6.5%. In such a case the already heavily-indebted Chinese economy might start to crumble under the pressure of interest payoffs, on the one hand, and non-returning ‘bad loans', on the other. Yet another issue is the huge scale of the nation‘s 'shadow economy' and related money-laundering schemes: huge volumes of money liquidity might occasionally resurface across select sectors like financial markets or real estate, generating the hazards of asset bubbles.

S&P could also improve their ratings should China's pace of lending expansion align with the overall pace of economic growth. Yet, as growth is objectively slowing in the debt-fueled economy, this is hardly a possibility within the current export-driven model. Attempts to spur growth without a full-scale reform would mean aggressive expansion in lending, which is a downgrade scenario. In other words, S&P sees the only way out of the situation, in which mainland China must find a new reliable foundation for economic growth, which might be domestic consumption and do it fast. In that case, the scope of lending might be moderate without hurting growth prospects, while overall economic expansion would indeed accelerate, easing concerns of a massive possible credit meltdown.