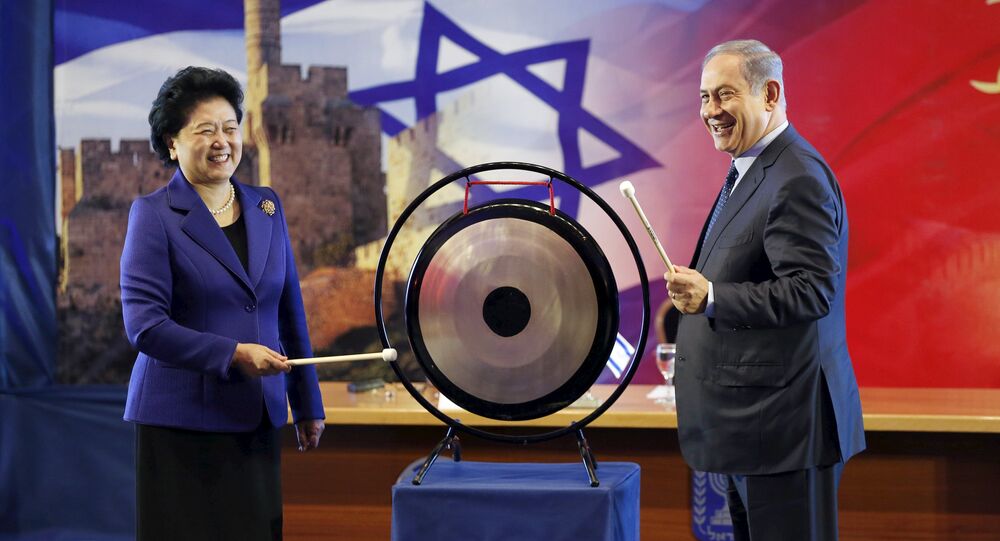 In an attempt to shift their focus in international trade away from the EU due to political tension, Israel is starting free trade negotiations with China; Beijing seeks investment capital and a greater presence in the Middle East.

© Sputnik / Mikhail Mokrushin
Free Economic Zone in Crimea Attracts Investment From China, Israel, Turkey
Kristian Rouz — Beijing and Tel-Aviv intend to negotiate a free-trade deal that would boost economic performance on both sides. Actual talks are already about to start, Chinese Vice Premier Liu Yangdong announced on Tuesday during her visit to Jerusalem. Israel and China are currently co-hosting the Joint Committee on Innovation Cooperation, and a speculated free-trade agreement would allegedly double the volume of bilateral trade.

After Liu's announcement, Israeli PM Benjamin Netanyahu confirmed the official start of negotiations. Currently, the volume of bilateral trade between China and Israel is roughly $8 bln, and any substantial increase in the volume of goods being shipped would help ease China's problem of factory-gate disinflation, while bolstering Israel's potential for exporting agricultural goods and commodities.

"Cooperation between Israel and China can produce massive results, and we believe that Israel can be the perfect partner," Netanyahu said in a statement.

Currently, Israel, in Tel-Aviv's official assessment, is overtly reliant on its trade with its biggest trading partner, the European Union, as well as extensive financial ties with the US. A trade deal with China could help diversify the Israeli economy, particularly by providing major stimulus to the agricultural sector. Israel's current trading partners are not significant importers of agricultural goods, while China is.

There are also political implications in Netanyahu's desire to strike a deal with China. The EU has increasingly been supporting the Palestinian side in the decades-long dispute with Israel over territorial demarcation. The EU authorities have also started labeling certain Israeli-produced goods as coming from ‘occupied territories', negatively affecting their sales.

For her part, Liu encouraged Israeli investment in Chinese projects as well. China has been struggling with severe disinvestment in its real economy stemming from several shocks, including the 2014 real estate bubble and the 2015 stock market meltdown.

"The Chinese economy has entered a new stage. We're under pressure but we are still the engine of the global economy. Over the next five years, Beijing aims to strengthen its transportation infrastructure, telecommunications and nuclear technology. Our hope is that more Israeli entrepreneurs will undertake projects in China," Liu said.

© Sputnik / Iliya Pitalev
After the Ban: North Korea's Largest Luxury Suppliers Include US, Israel
Subsequently, the establishment of an Israeli-Chinese free trade zone would boost Beijing's economic and political influence in the Middle East. Israel's dependence on the EU and US is expected to diminish, particularly because they have been adopting increasingly pro-Palestinian views due to the rise of the left and due to attitudes towards Israel which prevail in Muslim communities.

Israel and China have already signed 13 agreements at the meeting, including those on energy and water. Later this week, the sides are expecting to sign a 10-year multiple-entry visa agreement, boosting mutual travel and revenues from the hospitality industry in Israel and China alike.

"So far, China only has 10-year multiple entry visa agreements with the US and with Canada, so the agreement to be signed this week is a tremendous achievement for Israeli diplomacy," Hagai Shagrir, director of the Israeli Foreign Ministry's Northeast Asia department, said.