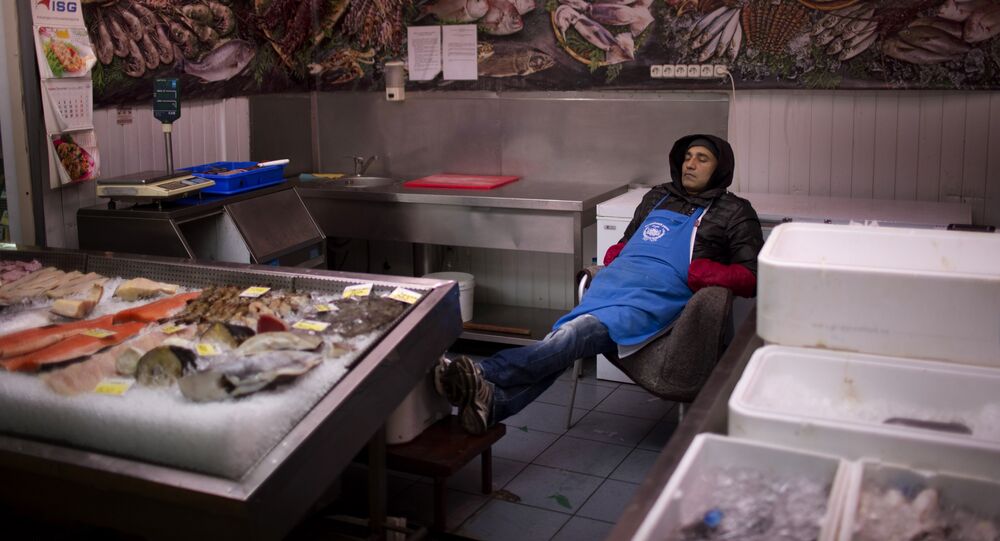 For nearly two years, Ukrainian officials have been promising that Western investors would soon flood the country with billions of investment dollars to save the country's troubled economy. However, investment sage Jim Rogers believes otherwise, warning that Ukraine could wind up like Columbia, which is still reeling from a thirty year civil war.

© AP Photo / Sergei Chuzavkov, file
Yatsenyuk’s Counsellor Resigns, Accuses Parliament of Wrecking Ukraine
In January, as the economic portion of Ukraine's association agreement with the European Union stepped into force, President Petro Poroshenko predicted that billions of dollars' worth of investment would enter the country together with European products.

Three months later, the investment situation still hasn't changed. Moreover, some prominent investment analysts have begun suggesting openly that they are not going to risk their capital in Ukraine.

Among them is Jim Rogers, entrepreneur, investor and the owner of Rogers Holdings, who says that he is not willing to risk investing in a country where a civil war threatens to be rekindled at any moment.

"The Ukrainian catastrophe has no end in sight. In Colombia, for example, they are nearing the end of their thirty year war…Ukraine too may face a thirty year war," Rogers noted, in an interview for Russia's Rambler News Service.

© REUTERS / Gleb Garanich
Ukraine Conflict May Escalate Again at Any Moment
"There are many other places to invest. If you are prepared to invest in Ukraine, it's possible that you will be successful sometime in the next 30 years. But I'm not ready. I think there are many other places where I could invest my money. I'd be better off investing in Kazakhstan than in Ukraine in 2016."

Commenting on Rogers' pessimistic assessment, Russia's Svobodnaya Pressa newspaper suggested that "it seems that more and more Western businessmen have similar views. In 2015, according to the Ukrainian State Statistics Service, the volume of foreign direct investment into the country amounted to only $3.7 billion."

The same statistics showed that Cyprus ranked first among investor countries, "which in fact indicates only that Ukrainian oligarchs had reinvested in themselves through their offshore companies. And even the Netherlands, which ranks second, was mainly those same off-shore companies, located on various islands under Dutch jurisdiction in the Caribbean Sea. "

At the same time, the paper noted, "the largest growth in 2015 came not from Europe or the United States, but from Russia. The Statistics Service said that this was the recapitalization of banks with Russian capital. According to Sergei Arbuzov, the former head of Ukraine's National Bank, these banks accounted for 49 percent of the total investment in the Ukrainian economy in 2015."

© AFP 2021 / KIRILL KUDRYAVTSEV
Love-Hate Relationship: For Kiev, Moscow is Simultaneously 'Aggressor' and 'Close Friend'
"It seems that in 2016 the only investments Kiev can count on is the IMF money, but even here there is a hitch, it turns out. Ukraine has been waiting for the third tranche of IMF funding for seven months now. On February 10 Christine Lagarde even said that she cannot rule out the suspension of cooperation. On March 18 IMF spokesman William Murray clarified that the secession of loan money was not under discussion, but added that Ukraine would have to reformat its coalition government for further cooperation to take place. Kiev is now actively engaged in this 'reformatting'."

Unfortunately, Svobodnaya Pressa suggests, "even if Ukraine succeeds in getting the third or even the fourth tranche of IMF money, it's obvious that this cannot last indefinitely. If the war and the crisis drags on for 30 years, as predicted by Jim Rogers, international organizations are unlikely to agree, for so long, to keep Kiev as their charity case."

In this light, the probability of Ukraine becoming an 'Eastern European Colombia' is growing.

Asked for comment, Ukrainian political scientist Viktor Pirozhenko told the newspaper that investors' cautious attitudes in relation to Ukraine "are completely understandable and to be expected."

© Sputnik / Stringer
That Awkward Momemt: Poroshenko, Yatsenyuk Pulling Ukraine Into its Corrupted Past
"Not just in the near future, but in the medium term as well, foreign investors are not going to invest in the Ukrainian economy. On the contrary, as the figures show, Ukraine is now facing a mass withdrawal even by foreigners who had business here."

Such attitudes, Pirozhenko noted, can be explained by the "ongoing civil war in the Donbass, [and] by Kiev's reluctance to fulfill the Minsk agreements, something which investors can clearly see."

Investors, the political scientist added, "are guided by actual facts, and not by declarations. And the facts show that Kiev plans to freeze the conflict – that is, it will not return these territories, but won't let them go either. In such circumstances, investment is impossible, because the conflict threatens to become unfrozen at any moment."

Ukraine's economy, he suggested, can only function and develop if it is able to orient itself toward Russia, both in terms of markets and the purchase of components. "But these ties have been destroyed by Kiev's Russophobic policy. Entire industries have been closed, or are on the brink of bankruptcy. In such circumstances it makes no sense to invest in Ukrainian companies."

© Sputnik / Vitaliy Belousov
A Matter of Life and Death: Why Ukraine Needs Russia Like Never Before
"The only sector which can serve as an object for investment is agriculture. This is a sobering fact amid a background of capital being withdrawn from sectors indicative of scientific and technical progress. But even here, foreigners prefer to invest in the commodity sector, and not in the processing of products with a high added value."

At the same time, the political scientist argues, Kiev's initiatives to grow Ukraine's IT sector are simply absurd, "because it is not possible to develop knowledge-intensive high-tech industries in a country where there are no basic 'Group A' industries – metallurgy, machinery, and so on. Without industry and related industries, it's impossible to develop sectors where technologies are concentrated, including IT."

Ultimately, with its economy tanking and dependent on IMF loans for survival, Pirozhenko warned that even here, the 'assistance' Ukraine is getting will cost it dearly in the long term. "Lending by the IMF may continue, but only on onerous terms. Since the country has nothing with which to pay its accrued interest, we will pay with our land, our factories, our labor force. The country could end up going under the hammer. There have been many examples of this in Latin America. Perhaps Jim Rogers was on to something in comparing Ukraine with Colombia. It is likely that this is precisely the path the country will take."

© Sputnik / Maks Vetrov
From Bombs to Autonomy: Donetsk Eager for Recognition of Independence
Alexander Shatilov, the dean of the sociology and political science department at Moscow's Financial University, suggests that the situation in Ukraine could actually be even worse. "Speaking honestly, there is no guarantee that the country will survive for 20 years. Colombia, at least, did not face the kinds of centrifugal tendencies Ukraine does today."

In terms of investment risks and the scale of corruption, Ukraine "is stuck at the level of Russia in the early 1990s, where it was almost impossible to do business if one was not protected by some outside force."

Ultimately, Shatilov says, Ukraine's likely economic future leaves much to be desired. "It's possible that the economy will not collapse completely. The United States, I think, will always be willing to throw a little charity money Ukraine's way. But it's not worth expecting any serious progress either. The statement by the European Commission chairman that Ukraine would vegetate on the doorstep of the European Union for 20-25 years caused a serious moral blow to Ukrainian society."

"In addition, Ukraine obviously hoped that they would receive compensation for the erosion of its industrial capacity, but this did not happen. All this leads to the fact that the country is increasingly unpredictable, and even those who organized the Maidan no longer know what to do with it."

For Kiev, Moscow is Simultaneously 'Aggressor' and 'Close Friend'