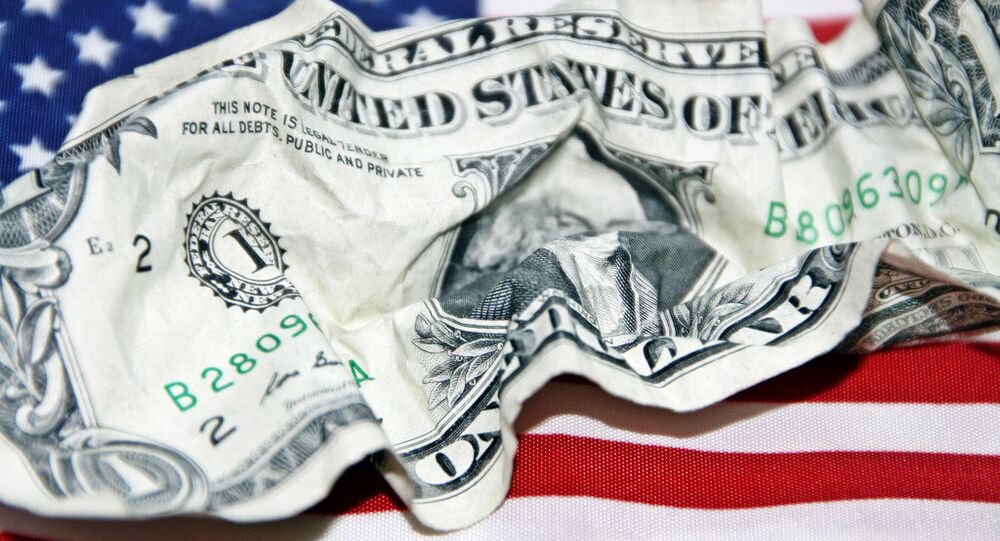 It makes little sense for an emerging multi-polar world to be dominated by dollars, American economist Samuel Rines notes, adding that 'the dollar's dominance may be the dollar's problem.'

The dollar's dominance is not always a blessing for the United States' economy, according to Samuel Rines, an American economist with Chilton Capital Management in Houston.

"With the arrival of the renminbi in the International Monetary Fund Special Drawing Rights basket, the Chinese currency has a bit more clout than it did previously. This has caused much rancor among those who believe the dollar should be the sacrosanct leader of the financial world. However, the relative strength of the dollar is clearly slowing the US economy, and limiting its policy options," Rines writes in his article for The National Interest.

"The dollar's dominance may be the dollar's problem," the economist stresses.

© CC BY 2.0 / Justin Vidamo / The Burning of the Sky
Oil Prices Slump: How Sino-Russian De-Dollarization May Save the Day
He explains that since Washington's monetary policy influences other countries' economies and commodities are typically priced in US dollars and, the Fed's ability "to act solely in the best interests of the United States" is limited.

"This is probably the most critical element of being the dominant reserve currency — a reduction in the independence and effectiveness of monetary policy," Rines underscores.

Therefore it is time for the renminbi to shoulder the burden, while Washington should pursue a strategy encouraging diversification, the economist believes.

According to Rines, the necessity of the dollar's domination is waning, and so is the US' political and economic importance.

"It makes little sense for an increasingly regionalized world to be dominated by dollars," he remarks, adding, however, that the US dollar will continue to play an important role in the world, along with other currencies.

© AFP 2020 / ATTA KENARE
Iran Playing 'Chess' With US by Moving Away From the Petrodollar
"The world is already politically multipolar with China, the EU and the United States dominating their regions, but has little leadership on a global scale," he continues, adding that China has created financial institutions apparently aimed at competing with the Bretton Wood system.

Interestingly enough, a year ago financial blog Zero Hedge admitted that "the China-led development bank [AIIB] essentially marks an epochal shift away from traditionally US-dominated multinational institutions like the IMF and the ADB. Meanwhile, it also represents an implicit attempt by the Chinese to usher in a kind of Sino-Monroe Doctrine and solidify their regional — and, to a certain extent their international — ambitions."

Rines warns that "without more substantive action, the Washington may be losing its ability to make the transition from a unipolar reserve currency system in a less disruptive fashion."

What lies beneath such unusual rhetoric? Is there trouble brewing for the global economy?

"We became increasingly concerned about global equity markets during the last quarter of 2015, reducing our exposure to equities as the economic outlook darkened and many companies reported disappointing earnings. Meanwhile central banks' policy makers became more pessimistic in their economic forecasts for, despite unprecedented monetary stimulus, growth remained anemic. Not surprisingly, market conditions have deteriorated further. So much so that the wind is certainly not behind us; indeed we may well be in the eye of a storm," he warned in an annual RIT Capital Partners' report.

The question remains open whether the Western financial establishment is on to something?