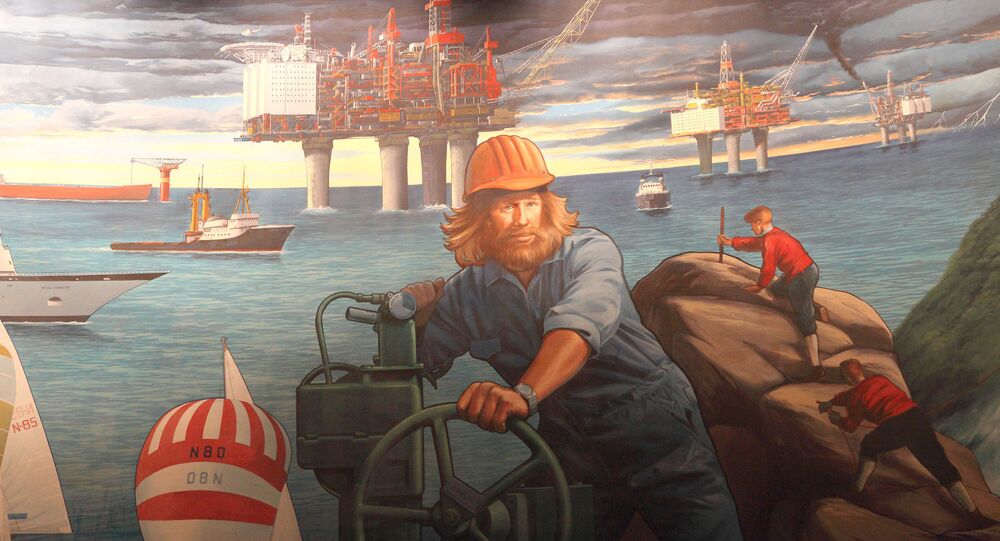 The Norwegian government has announced that it has made its first withdrawal from the country's massive $826 billion sovereign wealth fund, which it had set up for a "rainy day," for the first time since it was set up 20 years ago, in an effort to counter an economic downturn.

The withdrawal took place in January when 6.7 billion Norwegian kroner ($780 million) was used to pay for public spending, according to the local newspaper Dagens Naeringsliv.

Norway has sharply raised its annual budget spending to counter an economic downturn triggered by falling oil industry investments, as the price of North Sea crude has fallen by 70 percent since mid-2014.

The mining and manufacturing sectors, which are closely linked to production in the oil and gas industries, have also declined.

© AFP 2021 / PIERRE-HENRY DESHAYES
Norway Not Considering Cuts in Oil Production Amid Low Prices
The $826 billion wealth fund, called the Government Pension Fund Global, was set up twenty years ago, in 1996. Its purpose is to share the wealth from the country's oil and gas production with future generations. The fund is invested abroad in stocks, bonds and real estate.

In October, the government warned that it would resort to tapping into the fund to cover holes in its budget and stimulate the economy.

Some experts predict that this year is set to be critical for Norway, western Europe’s largest oil producer and exporter, as it expects to make use of its rainy-day fund sooner than planned.

Until now, the government has pumped nearly 200 billion kroner a year into the fund on average. But this year, it may spend as much as 80 billion kroner from the wealth fund’s returns, according to Norway’s central bank.

Norway is not the only oil producer to turn to its wealth funds for resources amid falling oil revenues. Some of the world’s biggest investors will have less money on hand to prop up global markets. Norway's Sovereign Wealth Fund is one of the largest national funds in the world from a per capita standpoint, as the population of the country is just over 5.08 million.