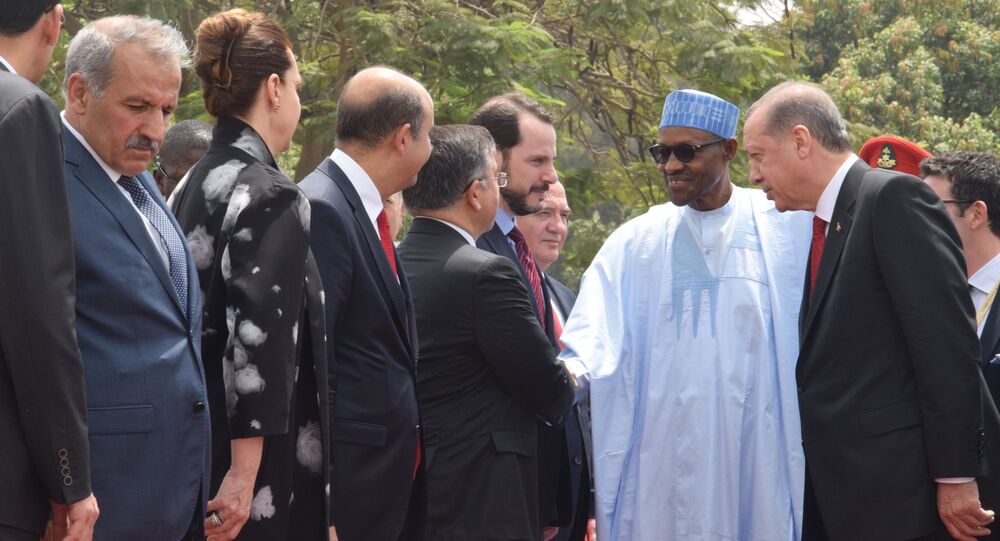 The Turkish economy has been seriously damaged as a result of the rift in relations with Russia following Ankara's downing of a Russian military jet over Syria late last year. Now, President Recip Tayyip Erdogan is attempting a pivot to Africa. But will it succeed?

© REUTERS / Murad Sezer
Heavy Burden: Russian Sanctions 'Will Permanently Damage Turkish Economy'
Between February 28 and March 4, the Turkish president, accompanied by 150 businessmen, toured the African continent, stopping by in Ivory Coast, Ghana, Nigeria and Guinea, with Turkish media also reporting that Ankara would be establishing a military presence on the Horn of Africa, in Somalia. The trip comes on the heels of a similar trip in January, which had Erdogan visiting Ethiopia, Djibouti, and Somalia.

"What is Turkey pursuing on the African market?" Cetingulec asked. The answer, the journalist suggested, is that "as Turkey's regional policy drifted from 'zero problems with neighbors' to 'precarious loneliness',  the accompanying loss of trade markets in the neighborhood and Russia has made Africa a potential 'lifesaver' in Ankara's eyes."

© AP Photo / Yasin Bulbul/Presidential Press Service
Does Erdogan See Himself as a 21st Century Ottoman Sultan?
"The question is, can Turkey increase its share on the African market at an extent that makes up for the regress in trade with neighbors and Russia?"

The figures, Cetingulec suggested, speak for themselves. "Turkey's trade volume with Nigeria, one of the stops on Erdogan's latest tour, stood at $426 million in the first 10 months of 2015. With the Ivory Coast and Ghana, the trade volumes were $390 and $399 million, respectively, for the whole year."

"Even a two-fold increase in trade with those countries would mean less than $3 billion in total, while trade with neighboring Iran alone was $25 billion off target last year. On the Iraqi and Russian markets, meanwhile, Turkey's exports were down by some $2 billion and $2.5 billion, respectively, in 2015. The downturn with Russia became even more pronounced this year, with the decline in exports worsening from 39% in 2015 to 60% in the first two months of the year."

At the same time, Cetingulec note, citing former Turkish treasury and foreign trade undersecretary Faik Oztrak, the technological sophistication of Turkish exports has been dropping, with the export of advanced goods in the manufacturing sector dropping from 6.2% in 2002 to 3.2% as of January 2016.

"In other words, Turkey is failing to export goods that are light in weight but heavy in value, which is forcing it to turn to markets where it can sell low-technology goods."

Even worse, the analyst recalled, Omer Cihad Vardan, the head of Turkey's Foreign Economic Relations Council, recently "warned that competition was already heated on the African market. 'China, the United States and European countries have made great headway there. We must act very fast from now on,' he told reporters last week."

© Sputnik / Vladimir Vyatkin
Turkey's Antalya Could Lose $8-9 Bln Amid Worsened Relations With Russia
To be sure, Cetingulec noted, economic opportunities for Turkish exporters and investors do exist, from the Ivory Coast's demand for Turkish investment in the construction center, to Nigeria's demand for Turkish textiles.

At the same time, however, the analyst recalled that "one has to keep in mind that the African markets are thousands of kilometers away, home to the world's poorest people with the lowest purchasing power. They could hardly become a substitute for the decline in Turkey's exports to neighboring countries," brought on by the swings and shifts in Turkey's foreign (and domestic) policy.

"Moreover, China is already in full force in Africa, posing tough competition with its cheap goods. In sum, Africa's retail market offers little hope for Turkey's traders, but its contractors and investors stand a chance in the long term," Cetingulec concluded.