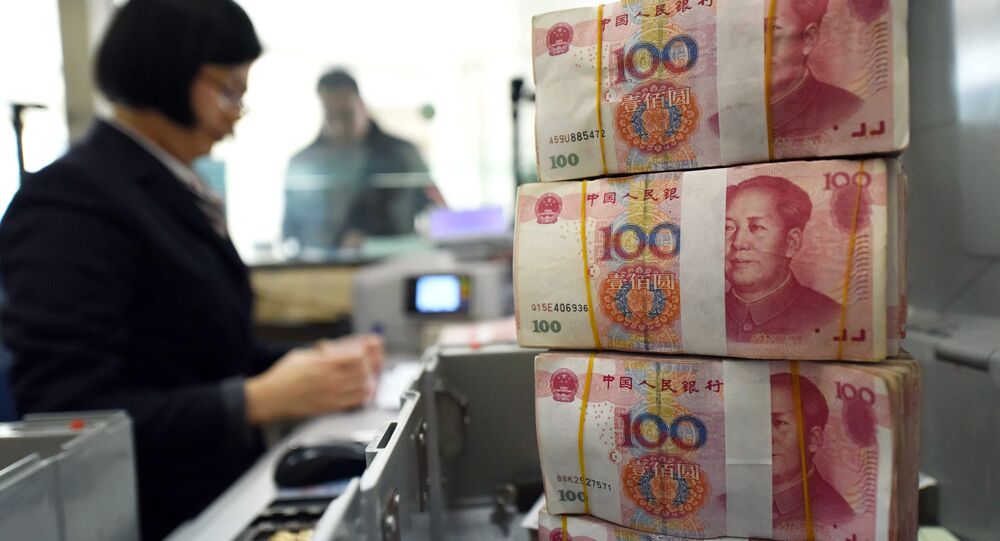 Smaller Chinese banks issued far too many new loans in January; however, it is unknown where the money went, to the People’s Bank of China’s (PBOC) grave concern – reserve requirements for smaller banks will be risen back again.

© AFP 2021 / STR
New Kid on the Block: Is US Dollar Ready to Share Spotlight With China’s Yuan?
Kristian Rouz — The People's Bank of China (PBOC) admitted their monetary policies might be excessively accommodative in terms of its reserve requirement ratios (RRRs) for certain commercial banks, according to a notice the regulator published Friday. Certain Chinese banks increased the scope of their lending too rapidly in the light of PBOC's efforts to spur overall economic growth, and the watchdog might have noticed that the newly-lent money isn't flowing into the real economy. Consequently, the PBOC is intending to impose tougher reserve requirements on select banks in order to stave off the issuance of potentially toxic loans, which could threaten the fragile stability of the country's economy.

China's smaller banks contributed a significant share of new loans issued in January, largely to the dismay of the PBOC. Smaller-cap banks are more exposed to the risk of failure or insolvency. That said, the Chinese regulator also admitted that the same RRR rules do not apply equally to all types of Chinese commercial banks, revealing the necessity of a ‘manual mode' in handling RRR with each category of commercial banks.

Possible asset bubbles are the main risk stemming from the situation, according to Yi Gang, PBOC's vice-governor. The next major risk is that the abundance of renminbi-denominated liquidity, released by banks in the form of new loans. He said this creates additional downward pressure of the national currency's FX rate. The PBOC has been spending tens of billions of dollars drawn from its FX reserves (including by dumping the currently appreciating US Treasuries) in order to ensure the renminbi avoids a crash devaluation scenario.

The PBOC said in a statement Friday that it will increase RRRs for certain banks that might have issued too many new loans, jeopardizing their own financial sustainability. Yet, even before the official announcement, certain Chinese banks had already been facing higher RRRs after January's significant increase in new loan issuance.

"This reinforces the view that they are not going to repeat the 2009-2010 kind of credit blowout," Tim Condon of Singapore-based ING Groep NV said. "They want to encourage the flow of financing to the corporate sector and that's consistent with growth objectives, but it's not going to be easy for zombie companies to borrow money and pile up nonperforming loans."

In January, the PBOC said, smaller- and medium-cap banks drove the massive expansion in new loan issuance, having put out some $222 bln worth of loans, roughly 60% of the entire scope of the increase. This category of banks includes those with a capitalization of less than 2 trln renminbi ($305 bln).

China's biggest commercial banks include the Bank of China, Agricultural Bank of China, China Construction Bank, and Industrial & Commercial Bank of China. This 'big four of China' contributed only about 40% of the rise in new loans issued; they are cautious and largely reluctant to lend money to the industrial, agricultural and construction sectors, as profits in these areas have shrunk recently due to factory gate disinflation and a generally cool real estate market.

For their part, banks with a lower level of capitalization tend to use nearly each and every opportunity to issue a new loan; however, most of this money is likely to flow into the shadow economy.

"I just can't figure out where they would find so many good projects to lend to. That's probably raising some red flag to the central bank," Mu Hua of GF Securities in Guangzhou said.

The PBOC is still, however, interested in keeping the overall monetary climate accommodative, as it signaled, in order to make up for occasional RRRs hikes. The Medium Term lending interest rate might be lowered from the current 3% to 2.85% for six-month loans. All in all, the PBOC is obviously attempting to minimize the speculative and shadowy side effects of its easing measures, while upholding its intent to spur the broader economy.